Lopez and Shakira marked a return to the female pop extravaganzas of the past decade at the Super Bowl—Gaga, Katy Perry, Beyoncé and Madonna have all headlined since 2012 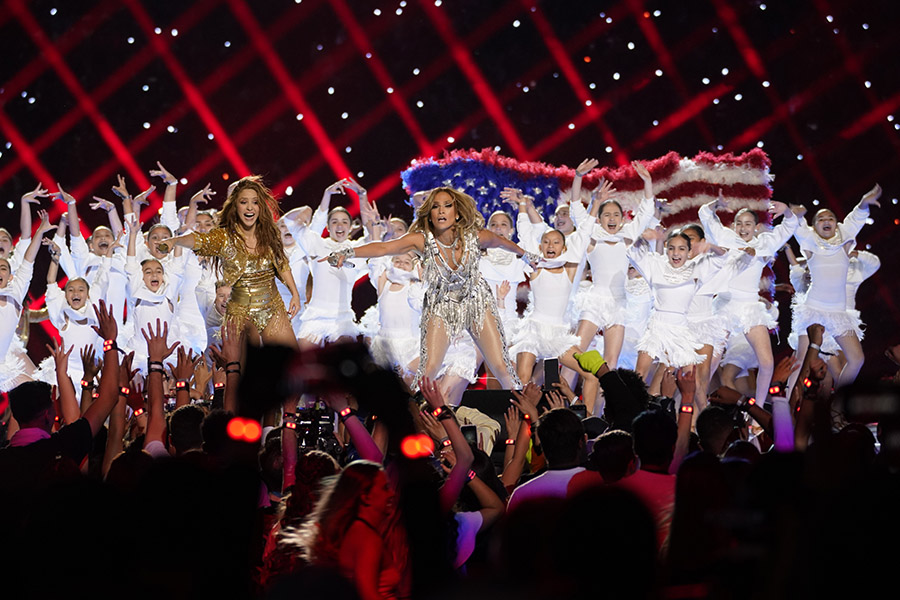 Jennifer Lopez and Shakira restored sparkle and spectacle to the Super Bowl halftime show on Sunday night with headlining sets heavy on Latin pride, a year after the pop-rock band Maroon 5 performed an anodyne set with the rapper Travis Scott that seemed to please nobody.
Lopez, 50, took an athletic, dance-heavy spin through hits from her 21-year career in pop music, from “Jenny From the Block” to “On the Floor,” with a guest appearance from the Colombian reggaeton star J Balvin for his track “Mi Gente.” Lopez spun atop a pole for “Waiting for Tonight” (showing off skills from her role in “Hustlers”) and brought out a children’s chorus for “Let’s Get Loud" that included the singer’s daughter, Emme. Shakira, 43, likewise reached back through her discography, which began in her native Colombia in the early 1990s and broke through in the United States with her 2001 album “Laundry Service”: “She Wolf,” “Whenever, Wherever” and “Chantaje.” She seized an electric guitar for “Empire” and crowd-surfed before “Hips Don’t Lie.” The Puerto Rican pop sensation Bad Bunny, draped in a silver coat, joined her to perform his verse from Cardi B’s “I Like It.” The performance, at Hard Rock Stadium in Miami Gardens, Florida, was the first halftime show since the partnership between the NFL and Jay-Z’s Roc Nation began. Some of pop’s most prominent black artists rebuffed the NFL last year in the wake of controversy over how the league handled players, most notably Colin Kaepernick, kneeling or sitting during the national anthem to protest racial injustice and police brutality. “The NFL has a great big platform, and it has to be all-inclusive,” Jay-Z said when the deal was announced last August. The partnership involves Roc Nation serving as the NFL’s “live music and entertainment strategist” and contributing to its activism campaign, Inspire Change. Lopez and Shakira marked a return to the female pop extravaganzas of the past decade at the Super Bowl — Lady Gaga, Katy Perry, Beyoncé and Madonna have all headlined since 2012. Bruno Mars and the Red Hot Chili Peppers, Coldplay (with Beyoncé and Bruno Mars) and Justin Timberlake performed sets with varying degrees of spectacle in between.

Tweets by @forbes_india
Jeff Bezos is sued by his girlfriend's brother
Should you opt for the new Income Tax regime?