Karachi faces plague of flies, and it's affecting businesses

The infestation is creating havoc in the city, and various vendors say business has "completely ended", spotlighting the city's haphazard waste management and inert local politics 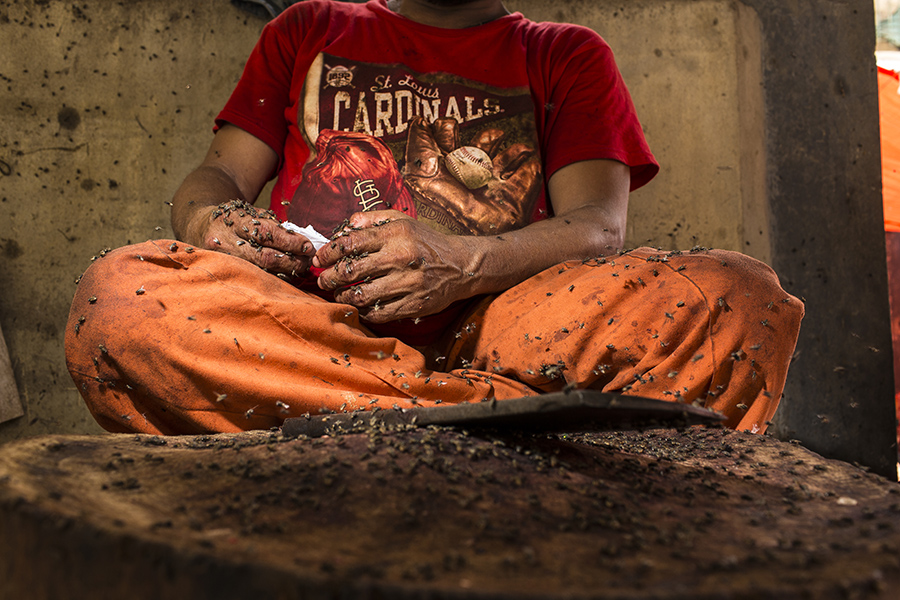 
KARACHI, Pakistan — First came the floods, as weeks of monsoon rains deluged neighborhoods across Karachi, sending sewage and trash through Pakistan’s largest city. Then came the long power outages, in some cases for 60 hours and counting.
And then it got worse: Karachi is now plagued by swarms of flies. The bugs seem to be everywhere in every neighborhood, bazaar and shop, sparing no one. They’re a bullying force on sidewalks, flying in and out of stores and cars and homes, and settling onto every available surface, from vegetables to people. Flies and flooding can often go together, and Karachi is no stranger to either. But Dr. Seemin Jamali, executive director for the Jinnah Postgraduate Medical Center, one of Karachi’s largest public hospitals, said this was the worst infestation of flies she had ever witnessed. “There are huge swarms of flies and mosquitoes,” she said. “It’s not just affecting the life of the common man — they’re so scary; they’re hounding people. You can’t walk straight on the road, there are so many flies everywhere.” The city started a fumigation drive, but the flies remain, and frustrations are growing. It’s all drawing new attention, and anger, to the city’s long-standing problems with garbage and drainage — an issue that feuding political factions have wielded against each other for years, but that hasn’t gotten any better. Experts say this infestation was probably brought on by the combination of stagnant rainwater, which stood in the city for days, with garbage on the streets and waste left behind from animals slaughtered during the recent Muslim festival of Eid al-Adha. Noman Ahmed, an expert on the city’s water issues and dean of the NED University of Engineering and Technology’s architecture and management sciences faculty, said the recent rainfall wasn’t really extraordinary. But what the rains revealed, he said, was Karachi’s compounding troubles with urban development, sewage, solid waste management and water contamination, including how the city’s natural drains are used as a dumping ground for solid waste. “The kind of havoc it created — if there are a couple of more spells like this, then the city will become completely dysfunctional,” Ahmed said. Jamali said a litany of medical ailments and diseases were on the rise as a result of the unsanitary conditions: malaria, gastroenteritis, typhoid, dengue fever, the chikungunya virus, respiratory disorders and Congo fever. “As a community, we also need to blame ourselves,” she said, noting how people dumped sacrificial animals’ offal onto the streets. “We have collected these heaps of garbage.” On a Monday afternoon, vendors around Bohri Bazaar sat fanning their wares to try to keep the flies at bay. Flies flew in and out of shops, settling on displays of fabric and towels. Muhammad Ismail Siddiqui, 54, a vendor selling traditional sweets like jalebi and gulab jamun, had covered them with clear plastic for protection. “No, no, no,” Siddiqui said, when asked if the flies were just a seasonal menace. In previous years, he said, the government would organize fumigation drives that took place in the early hours of the day. “But there’s nothing now — we can’t do anything; we’re helpless. Business has completely ended,” he said. “Whoever comes just looks at the flies.” A sugar cane juice shop on the same street was also swarmed, and shopkeepers there, too, were despairing. “There’s no cure,” said Shahid, 45, who only gave one name. “We’ve tried everything — spraying, setting a fire,” he said, pointing to a charred can where a blaze had been set in hopes that the smoke would dispel the flies. “If you spray, they go away and then come back.” There’s no respite from the bugs on the internet, either, where Karachi residents are responding with memes and calling their hometown the “city of flies.” Plenty of blame has been aimed at the city’s politics, and the parties tussling for influence in Karachi have not failed to notice. In recent days, sanitation has again become a rallying cry — and a political weapon — for politicians. The Pakistan Tehreek-e-Insaf, or PTI, which holds power in the national government, is trying to assert its base in Karachi to fight the traditional provincial-level powerhouse, the Pakistan Peoples Party, or PPP. One local legislator for the PTI started a “Let’s Clean Karachi” campaign that has implicitly blamed the PPP for the garbage problem. Saeed Ghani, a PPP senator, claims that the campaign made the crisis worse with mismanaged cleanups. Truly cleaning up Karachi — where it has become common to see garbage piled up on roadsides and in empty plots — would be a tall and expensive order. The city produces about 12,000 tons of waste every day. Karachi’s resources and infrastructure have not kept up with the pressure of constant expansion, population growth and lifestyle changes among its 15 million-plus residents. And it is suffering from the same vulnerability to climate-change issues that is hitting the rest of Pakistan so intensely. Furthermore, Karachi’s management is complex and fragmented: Waste management and municipal services are dealt with by different agencies. Buildings are constructed over drains. Large swaths of the city, including some of its most upscale neighborhoods, are cantonment areas, which are managed separately. “Karachi’s livability is falling,” said Ahmed, the water issues expert. “The city requires a kind of sanitation emergency,” he said — one that would mobilize provincial resources to clear the backlog of waste from streets and drains and build a new sanitation management system from scratch. That would require politicians to forge a working relationship. But the bugs don’t seem willing to observe political boundaries. “There is an abundance of flies,” said Ismail Lalpuria, a furniture trader in the Arambagh area of Saddar who was losing patience with the damage to his business. “All the political parties are just doing politics,” he said. “No one is doing any work.”