According to Crisil, ₹50 lakh crore is needed for projects till 2022 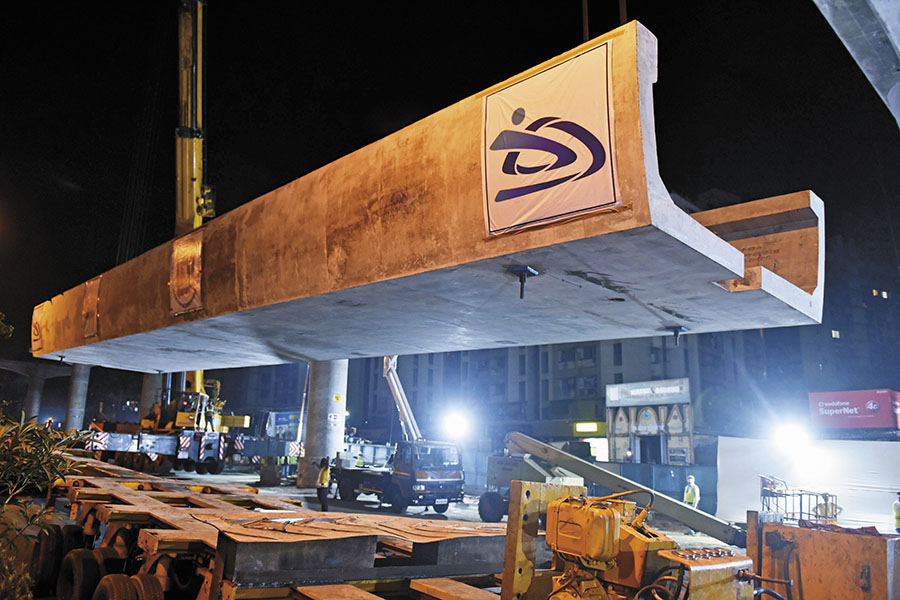 The under-construction Metro-7 corridor from Andheri (East) to Dahisar (East) in Mumbai. The 16.5-km elevated corridor is expected to be operational by 2019
Image: Pratham Gokhale / Hindustan Times via Getty Images

Days after the central government announced on October 24 that it would spend about ₹7 lakh crore to build more than 83,000 km of highways by 2022 in what is the biggest highway construction plan so far, ratings and research company Crisil Limited launched India’s first ‘investability’ index at the Crisil India Infrastructure Conclave in New Delhi on October 26.

“It’s great timing,” beamed Ashu Suyash, Crisil’s managing director and CEO, referring to the index that measures and evaluates the investment attractiveness of select infrastructure sectors such as power, railways, aviation, roads and highways, ports and shipping, and urban development. Based on parameters such as policy direction, regulatory maturity, financial sustainability and implementation ease, Suyash intends the index to become a “credible national benchmark”, something that would help spur private investment in the sector.

“For years, the government has been doing the heavy lifting in terms of infrastructure investments. However, having only one cylinder firing is not good enough. Accelerating private sector investments is an essential complementarity,” she added. According to Crisil’s findings—documented in a first-of-its-kind Infrastructure Yearbook 2017, which was released along with the index—India needs to spend at least ₹50 lakh crore between fiscals 2018 and 2022 to build its infrastructural needs. That is a 35 percent jump from the ₹37 lakh crore that was spent on infrastructure investments in the five fiscals to 2017.

In order to meet this spending requirement, private money needs to be brought back into infrastructure projects. In fiscals 2016 and 2017, higher central government spending partially offset a steep decline in private investments and deterioration in state government finances.

According to Amitabh Kant, CEO of government think tank Niti Aayog, who was present at the launch, India’s infrastructure sector has long suffered because of under-investment. Over the last three years, the government, he noted, had pumped in resources to build roads and airports, almost making up for the lack of private sector investments in such projects. “But this can be done in the short run only, not in the long run,” he said, adding that India’s per capita infrastructure spending lags behind developed nations by a factor of 1.5 and behind China by a factor of 3.

So what will it take to spur private spending on infrastructure? For one, the problem of stressed assets in banking and the over-leveraged balance sheets of promoters needs “expeditious resolution”, said Sameer Bhatia, president, Crisil Infrastructure Advisory; the bond markets need to be deepened to reduce dependence on traditional banking, while, importantly, the public-private partnership (PPP) model needs to be revived.

Kant said the PPP model has lost its vibrancy, and blamed the government and the private sector for it. While the government inadequately prepared for projects, the private sector, he said, bid aggressively for projects without sufficient due diligence. “They then shamelessly withdraw from projects,” he said. As a result, “great damage” has been done to the country’s infrastructure sector.

To fix the problem, Kant proposed that the government should restrict itself to planning and developing infrastructure projects. Once complete, and when a revenue stream has been created, the government should hand over the operation and maintenance of projects—including large ones like the Bharatmala Project, which forms part of the recently announced ₹7 lakh crore investment plan—to the private sector. This reverse build-operate-transfer model would help revive the PPP model, he said.

In order to create a more diversified financing system, Kant also pitched for channeling insurance and pension funds to finance infrastructure projects, as well as a complete re-examination of the Viability Gap Funding scheme (launched in 2004, it provides a one-time or deferred grant to infrastructure projects under PPP that are necessary but financially unviable).

Of the ₹50 lakh crore of investment needed in the five fiscals to 2022, power, transport and urban sectors will account for 78 percent of the overall spending, said Crisil. But the most attractive sectors to invest in, according to the Crisil InfraInvex scores for 2017, are power transmission, followed by roads and highways, and renewable energy.