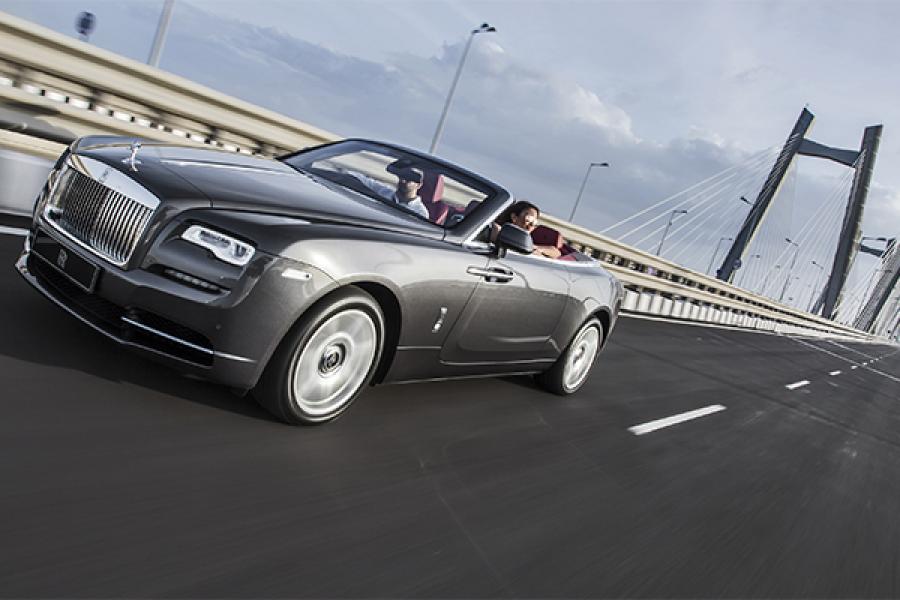 From the Silver Ghost owned by the Maharaja of Gwalior in the 20th century to the Phantom owned by superstar Amitabh Bachchan, British luxury car-maker Rolls-Royce has enjoyed a strong presence in the Indian market for over a century. In a hat-tip to that legacy, the company announced the launch of Dawn, its new four-seat Drophead, in Mumbai on Friday.

Priced at a base rate of Rs 6.25 crore, the car is one of the quietest convertible vehicles in the world today with an average waiting period of six months. The cars will be launched in Chennai in July and Delhi by the end of this year.

By using fabric roof configuration, the roof operates in just over 20 seconds at a speed of up to 50 km per hour. The car has 80 percent unique body panels and new tyres. That apart, “it has the same level of interior comfort and is sound-proof, like any other coupé,” says Michael Schneider, regional general manager, sales, Asia Pacific. He adds that normally in a convertible roof, one always compromises on headspace, especially while sitting on the rear seat. But Dawn is a full-four seat, with a very specific interior design, and gives you an extra inch of headspace. “In creating Dawn, we have accepted no compromise to the comfort and luxury of four adults who want to travel together,” says Giles Taylor, design director, Rolls-Royce. The deck too reflects the Rolls-Royce’s excellence in craftsmanship. The wood on the deck flows down the ‘waterfall’ between the rear seats and around the cabin clothing the interior door panel.

Unlike the previous models, which offered a more formal colour scheme of black and white, “with Dawn, people are embracing more colours,” says Schneider. In addition, the two-door concept has enabled the brand to cater to a much younger customer base. “Four years ago, the average age of our customers would have been in the mid-50s, but now, it’s in the mid-40s,” he says.

Sharad Kachalia, director, Rolls-Royce Motor Cars Mumbai and director at Navnit Motors, agrees. “We are now consistently seeing a younger generation of entrepreneurs aspiring to own a Rolls-Royce,” he says. Navnit Motors has been the official dealer for the brand in India since 2005.

“India is one of the focus markets for Rolls-Royce globally,” says Schneider. The company sold “just under 4,000” units worldwide in 2015, but Schneider refuses to share the India sales numbers or his sales target for this year. “It is not about numbers for us,” he says.

With a current car park of around 300 vehicles, Kachalia says he is optimistic about the demand for Dawn. But wouldn’t infrastructural limitations in India hinder Rolls-Royce’s sale? For that, Schneider replies, “Dawn is a magic carpet ride, no matter what the road conditions are.”

Tweets by @forbes_india
How to make $1 billion in your spare time
Toxic cocktails: Over-valued assets and high debt