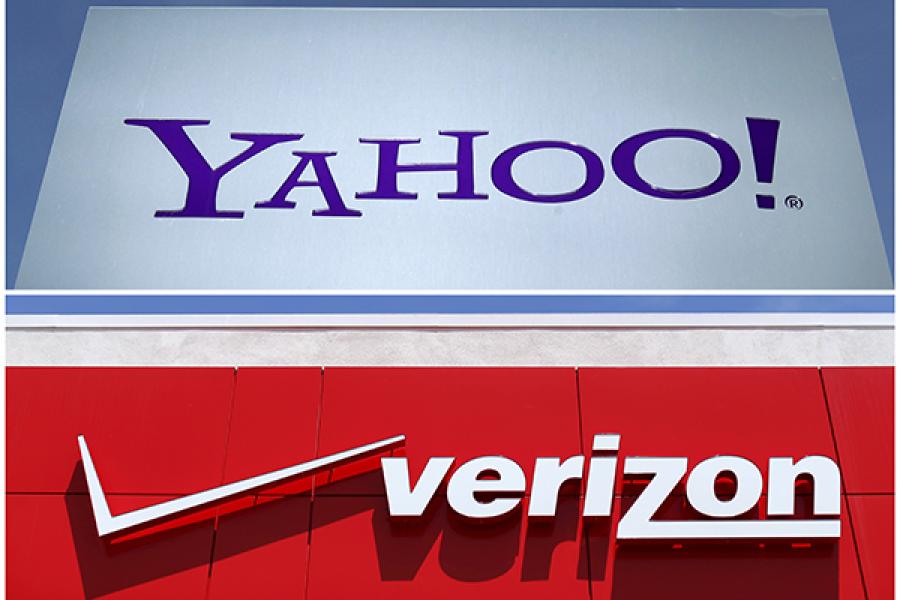 Image: Denis Balibouse / Reuters
A combination photo shows Yahoo logo in Rolle, Switzerland (top) in 2012 and a Verizon sign at a retail store in San Diego, California, U.S. In 2016.

Verizon Communications Inc., an American wireless services provider, has agreed to buy Yahoo’s operating business for approximately $4.83 billion in cash, the companies said in a press release on Monday. The operating business, meaning the Internet company’s main web business, will be integrated with Verizon’s AOL unit, according to the release.

The move brings to an end a long turnaround attempt at Yahoo, including the ongoing one by former Google executive Marissa Mayer who was hired as the struggling internet company’s CEO in July 2012. Yahoo will then be left with its share in Alibaba Group, the Chinese ecommerce giant, the Yahoo Japan business and some other intellectual property.

“Combining Verizon, AOL and Yahoo will create a new powerful competitive rival in mobile media, and an open, scaled alternative offering for advertisers and publishers,” Tim Armstrong, CEO of Verizon said in the release.

The deal is subject to customary closing conditions, approval by Yahoo’s shareholders, and regulatory approvals, and is expected to close in Jan-March quarter of 2017. The sale does not include Yahoo’s cash either, and the company expects to return much of its net cash to shareholders.

“The sale of our operating business, which effectively separates our Asian asset equity stakes, is an important step in our plan to unlock shareholder value for Yahoo. This transaction also sets up a great opportunity for Yahoo to build further distribution and accelerate our work in mobile, video, native advertising and social,” Mayer said in the press release.

The addition of Yahoo to Verizon and AOL will create one of the largest portfolios of owned and partnered global brands with extensive distribution capabilities, the companies said in the release. The AOL-Yahoo combined business will have more than 25 brands in its portfolio, and Yahoo has content in categories including finance, news and sports, and an email service with approximately 225 million monthly active users, the companies said.

Once the deal goes through, Yahoo, with the assets that remain with it, will change its name and become a publicly traded investment company. For Verizon, which was widely known as the most likely buyer, the deal will also fetch Brightroll, a “programmatic demand-side platform” to manage advertisements, Flurry, an independent mobile apps analytics service, and Gemini, a native and search advertising solution, according to the release.

Tweets by @forbesindia
More than 50% of India's internet users will use digital payments by 2020: Google-BCG
Xiaomi's biggest challenge in India could be its own success