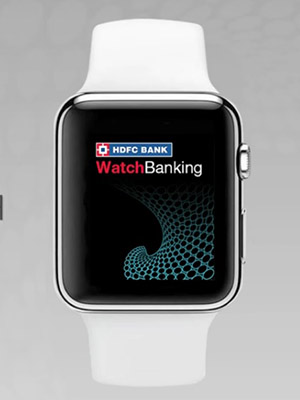 HDFC Bank on Thursday launched its mobile banking app – WatchBanking – for the Apple Watch, the first-of-its-kind in India. The app, which has been in the works since Apple’s announcement of the watch in November last year, reflects HDFC Bank's ambition to become an increasingly digitised institution.

The Apple Watch is not yet available for sale in India, but Nitin Chugh, HDFC Bank's senior executive vice president and head of digital banking, anticipates its imminent arrival and expects there to be roughly one million Apple Watches in the country by 2016. Chugh said HDFC  Bank is also working at developing an app for the Apple Watch’s Android counterparts.

WatchBanking is available for free on the iTunes App store, and works in conjunction with HDFC Bank's MobileBanking app for the iPhone. Apart from viewing their account information, users will be able to complete ten different tasks on the app, including mobile and DTH recharge, locating the nearest HDFC Bank branch or ATM, and hot listing lost debit cards. Other functions, including the ability to pay their bills, will be added soon.

The app performed well in live demos at HDFC Bank's press conference in Mumbai. It appears well-designed with a sleek and intuitive interface. Its appearance is remarkably uncluttered, though some customers still might find it frustrating to use its smallest buttons with precision – on an already very small screen.

The app’s performance aside, the bigger question is whether it will catch on.  WatchBanking functions only when it is paired via Bluetooth with the iPhone MobileBanking app and it does not offer functions beyond those of the iPhone app. And its main draw, then, is the convenience of not having to remove an iPhone from one’s pocket.

Many Apple Watch apps similarly rely on their iPhone counterparts to function, and the jury is still out on whether consumers will deem the watch’s convenience attractive enough to justify the expense in the face of this redundancy (the least expensive model sells in the US for $349, while the most expensive rings in at nearly 43 times that price).

HDFC Bank's eagerness to stay ahead of the technological curve is commendable, and its new software is undeniably elegant and impressive. What is far less clear is whether there will be sufficient demand to make WatchBanking worth their while.