Art with a capital "I"

After Michael Jackson died, fans paid crazy sums for memorabilia as varied as blueprints to his family home, bricks from the building where he first performed, and the legendary red suede jacket.
What would they think of a portrait that showed the strands of his DNA?
DNA 11 , in Canada, was the first to create DNA-inspired artwork (they have since spawned a host of copycats), turning genome sequences into design installation on canvas, glass or crytsal.

The company was started by best pals Nazim Ahmed and Adrian Salamunovic over a bottle of wine four years ago. Ahmed worked in biotech, Salamunovic in marketing; they had the nous to make the idea fly. 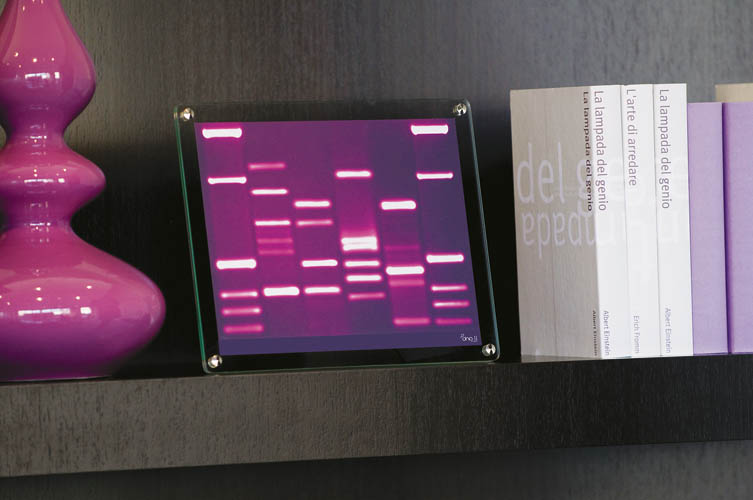 Image: DNA 11
A little bit of yourself
“The first piece we created,” Ahmed says, “was just a fun thing, a picture of my DNA and his. It was a natural cross between our interests, but we never thought it would be a business. Somehow it took on a life of its own.”
Fun, art, gimmick, whatever you call it, DNA 11’s artwork has made it to galleries in New York, Tokyo and Mumbai, sells in design stores, was featured in an episode of CSI: New York, and ships to more than 50 countries, one of them India.
Qadir Rangwala had always worked in his family’s dyeing business, but loved art. He saw a DNA 11 piece and liked it so much he asked to set up operations here in India. Since last November, DNA 11 India has sold more than 40 pieces to Bollywood stars, socialites, and CEOs.
Want one? First, choose colour, size, and framing. Next, with their DNA collection kit, swab your cheek, and send it in. It goes from Mumbai to a New York lab, and then to Canada where it’s printed on a canvas. A few weeks later, it’s at your door.
Rangwala is reassuring about the security of your DNA information: “We destroy it immediately after making the artwork.” Ahmed adds that their designers never examine a person’s DNA, except the few strands that make it to the canvas.

The chromosome-inspired pieces are the most popular, but DNA 11 also
makes FingerPrint and Kiss Portraits — your own finger- and lip-prints, blown up and displayed in a Warholesque way on canvas.

Flight attendant for Qatar Airways, Nabila Soleja, chose an orange and red canvas to match her house. She is now thinking about one for her mother. “I am not a great artist and could not do it for myself, but this is my own art put in a better fashion. And I’m not married, but I saw the couple’s DNA in neutral black and white, and it looks beautiful. I’d like to have one someday.”
Ahmed says he’s got a long list of reasons why people have come to him for a canvas: They’re interested in the scientific impact of DNA on society and like seeing it in art; it’s the ultimate conversation piece; this is the most involved they have ever got in the creation process; or they just like the emotional significance (some want their pet’s DNA, or that of a deceased relative, or a couple DNA piece). 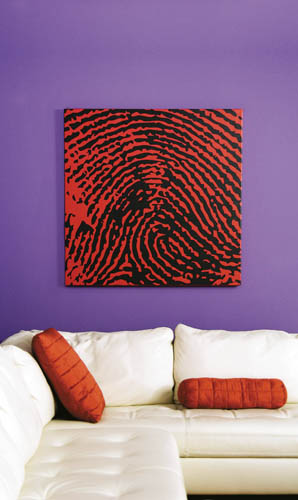 Image: DNA 11
YOU ON CANVAS: Your DNA interpreted as an intensly personal piece of art that channels the colourful, expressionistic rectangle bands of Mark Rothko
Says Fatima Sham-Mahimwala, a director of sales for Leading Hotels of the World, “I got it for my husband for our wedding. It’s hanging in our bedroom. It’s nice to always have it there on your wall. And my husband liked it because it was quite simple, not crazy or inexplicable or way out there.”
DNA 11’s customers are mostly yuppie young professionals, celebs like Mandy Moore and Miguel Cabrera, and single executives. But families like it too.
Often a whole family will send in their DNA and get a “modern day family portrait,” as Rangwala calls it. He mentions a recent purchase by a top industrial family.
DNA is your building block, sure, but what does it really mean?
Ahmed, who once worked in digital biological imaging, says the most interesting part is that DNA shows how all living species are connected. “The first piece we unveiled was for Absolut Vodka, and we used fruit DNA. The fruit DNA looked similar to human bands, and it shows we are all connected from these basic building blocks. Our art shows the similarity.”
The touchy-feely explanation works for some, but others like to hear something more concrete. So the company often send out a ‘G-pack’, a booklet which shows a person how their ‘gender’, ‘brain’, ‘love’, and ‘sports’ genes are represented on the canvas. It’s what Ahmed calls “a fun kind of thing where we zoom into four specific genes in an area of your genome involved in those four processes. We snip those out and show them on your portrait.”
That doesn’t mean DNA 11’s portraits will tell you whether you’re good at basketball, or smarter than your wife, or if you’ve got a genetic disease. It’s just art.
Some US celebrities have already auctioned off DNA portraits for charity. How much will it be worth when they’re gone? Of course, Ahmed can’t say. “For the same reason someone buys an autograph, they may want a DNA portrait. It’s a beautiful way of remembering someone.”
Almost like having a strand of hair.
Deepa Nair is a staff writer at Better Interiors

Tweets by @forbesindia
Leader & Shidousha
"In India, I find that people tend to please people too much"