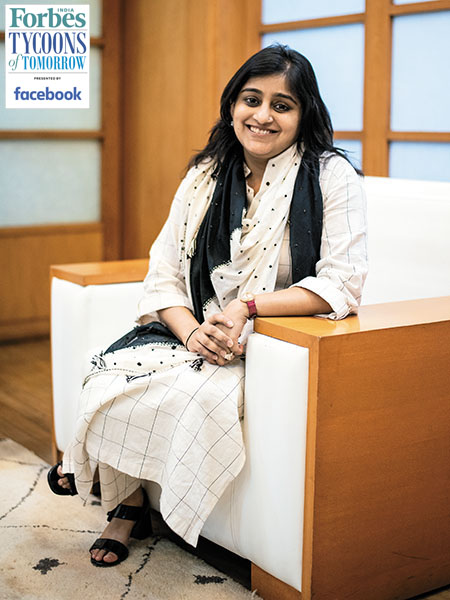 Leveraging its distribution network, Ashni Biyani’s FCL is firming up partnerships to expand its portfolio of products
Indian consumers have never been as aspirational as they are today. Higher disposable income, a wider horizon of expectations and personal ambitions, and access to information and experiences have given them a new prism through which to seek out fulfillment. “For instance, today, women across all socio-economic categories want to wear high heels. Earlier, high heels were perceived to be worn by women of only a certain socio-economic category,” says Ashni Biyani (33), managing director, of Future Consumer Limited (FCL), who has made it her job to know what Indians want to buy. Because knowing what consumers want is the engine that is powering FCL.

And fuelling this engine is the data that is being collected through the FMCG giant’s controlled distribution model. “Through our data-driven forecasting ability, we get to know what is selling, where, and how much,” says Biyani, “creating our own demand forecasting tool, as well as buying off-the-shelf products to become the foremost distribution system in the country.”

Click here for the full Tycoons of Tomorrow listIn a March 2018 report on FCL, analysts at Motilal Oswal Financial Services wrote: “What distinguishes FCL from a traditional FMCG company is its distribution structure. The company primarily relies on modern retail for its distribution (about 93 percent of sales), while the proportion of modern trade for other FMCG companies has been around 10 to 12 percent over the past many years.”

Leveraging its distribution network, FCL is also firming up partnerships to expand its portfolio, and to enter new categories with its own brand of products. Having started with staples under the Golden Harvest brand, it now has diversified offerings under fruits and vegetables, home and personal care as well. While brands such as Nilgiris, Kara, Puretta, and Prim have been acquired, others such as Tasty Treat, Sunkist and Ekta have been licenced; a couple such as Eatin and Terra are also being manufactured under joint ventures. “We want to create a win-win situation through collaboration, rather than compete,” Biyani says. In the last year, FCL has launched 424 new stock keeping units in various products across 27 categories.

Explaining the advantage that FCL has over conventional consumer goods companies, Ankur Bisen, senior vice president and head of consumer and retail at Technopak, says the company has entered the market at a time when consumer preferences are changing, and it is able to cater to these preferences faster than incumbent brands. “Unlike older FMCG companies, FCL is category agnostic and innovative, it provides value to the customer, and addresses white spaces in the market,” says Bisen.

Biyani’s understanding of the Indian consumer comes to the fore yet again when she talks about the range of food products that FCL has launched with religious fasts in mind, like flours made of bhagar, kuttu and sabudana. “We are a country that is negotiating traditions, while seeking modernity,” she explains. The idea for these found shape in Future Ideas, of which Biyani is director, and which, she says, is “the source tank” that is providing FCL with “the ability to see consumers in a new light”.