From Ranveer to Rani: The stars shine bright at Forbes India Tycoons of Tomorrow 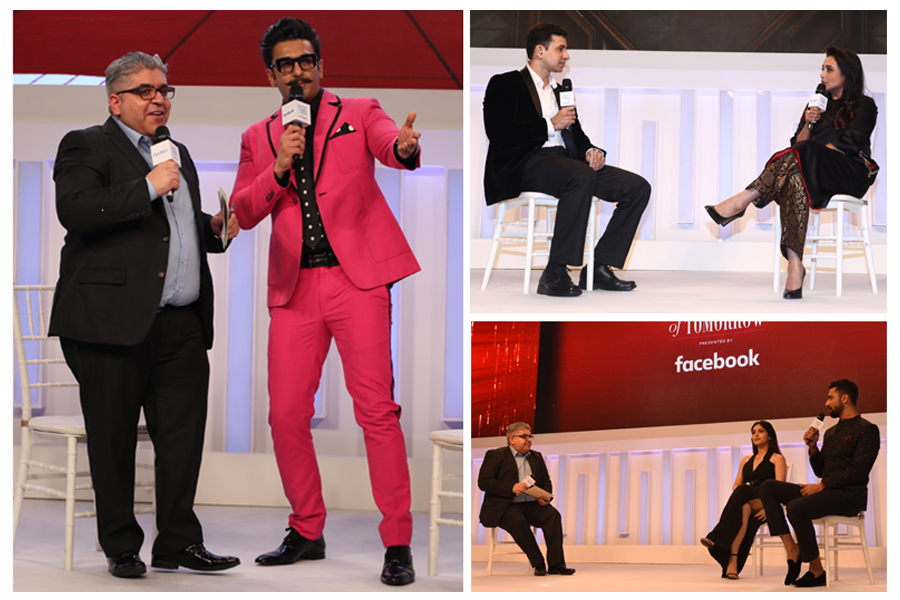 (Clockwise) Rajeev Masand, Entertainment Editor, CNN-News18 with Ranveer Singh;  Forbes India’s Head of Desk, Kunal Purandare with Rani Mukerji and Masand with Bhumi Pednekar and Vicky Kaushal
Image: Madhu Kapparath, Amit Verma and Mexy Xavier
He came. He saw. He conquered the hearts of the esteemed guests with his charm, confidence and conversation at the inaugural Forbes India Tycoons of Tomorrow event in Mumbai on Tuesday.

Dressed in a quirky hot pink corduroy suit, actor Ranveer Singh admitted that while he liked camaraderie and fooling around, he was serious about the craft of acting, especially at a time when the older guard of actors was still relevant and reinventing itself.

In a fireside chat with Rajeev Masand, Entertainment Editor, CNN-News18, the 33-year-old actor was effusive in his praise of his seniors such as the three Khans (Aamir, Salman and Shah Rukh), Akshay Kumar and Ajay Devgn.

"The reason they are still around and still working is because they are sincere. They love their work. They deliver quality films. They know their audience; they know what kind of films they're making and for whom they're making them. And they're masters at what they do," he said.

Singh, who has earned commercial and critical success for his range and intensity of performance over the years, emphasised the need to offer audiences content-driven films.

“Now you're not competing in a small local pool. Now at a flick of a switch, you have access to the entire globe. So it's become very important to think it through to give content consideration over other considerations. When you choose to do a certain project, you can't just do anything and get away with it,” he said.

Known for his over-the-top persona off the screen, Singh pointed out that doing films like Lootera (2013), a few years after his debut in Band Baaja Baaraat (2010) was a deliberate choice to showcase his talent. “I wanted to do a film like Lootera, which was a contrary character to what perceive of me, in order to display that versatility and not get typecast so soon as a bubbly, gregarious archtype. I enjoy intense parts; intense scenes to play. But that's when I am performing. That's when I am acting. In life, I'm just playing the fool all the time,” the actor added.

Singh, who has delivered some of the biggest hits such as Goliyon Ki Rasleela Ram-Leela (2013), Bajirao Mastani (2015), and Padmaavat (2018), also explained the secret of his being grounded—amid the constant glow of limelight—the early years of struggle in his personal and professional life.

“I never lose sight of where I am coming from. The stuff that is happening around me right now, is almost unimaginable; beyond my wildest imaginations. I had this one dream of becoming an actor in Hindi films. And it happened for me. I am filled with a sense of gratitude every single day,” he concluded.

Earlier in the evening, Masand also spoke to two emerging superstars of the Hindi film industry, Bhumi Pednekar and Vicky Kaushal, who are a part of the inaugural Forbes India Tycoons of Tomorrow list.

As part of a discussion about the ‘Changing character of storytelling’, the young actors shared their thoughts about the evolving audience and the growing importance of Over-the-top (OTT) platforms.

“I think there has been an evolution in the audience. And that evolution gives a lot of power to actors, directors, producers and writers. I strongly believe, films don’t change the society, society that changed the films,” said Kaushal. This year Kaushal has gained immense popularity with five releases in 2018, including Raazi, Sanju, Manmarziyaan, Love per square foot and Lust Stories, of which the latter two were Netflix originals. Kaushal began his career in Bollywood as assistant director to Anurag Kashyap, to understand the art of film-making, before getting in front of the camera.

Another ‘outsider’ to the big bad world of Bollywood, Bhumi Pednekar started her journey as a casting person and then later went on to becoming an actor. Be it Dum Laga ke Haisha (2015), Toilet: Ek Prem Katha (2017) or Lust Stories (2018), Pednekar has proven her versatility. She strongly believes that OTT platforms are the future of entertainment. With the phenomenal success of Lust Stories, Pednekar believes that, “Platforms like Netflix should be used to tell extraordinary stories, celluloid can manage the rest.”

“The small screen is taking off simply because people need to take time out for entertainment. They are mostly watching it on their way to work or back, so it’s important to have it in your pocket,” Kaushal added.

While appreciation and validation of his work is important to him, the ‘rising star of cinema’ is big on producers making good money through his films as well. “It is important for films to make money, because that gives other smaller films the opportunity to come on the forefront. A Masaan could be made simply because it was a great year for cinema,” states Kaushal.

In the ever-changing film industry, Pednekar sees an optimistic future, “In the next five years, I hope I’m a part of a cinema that leaves a legacy, where people remember me by my character.” Kaushal on the other hand, is all about living in the moment.

Another highlight of the glittering Forbes India Tycoons of Tomorrow event was the fireside chat with actor Rani Mukerji, who spoke to Forbes India’s Head of Desk, Kunal Purandare.

The 40-year-old film star mentioned hard work and sincerity as the attributes that go into making an icon. “Stars are made with destiny, but you can only be a good actor if you keep honing your skills,” Rani said, adding that the perception of the film world as a “glamorous” industry belied the effort that cinema professionals put in.

Acknowledging that the enthusiasm and love of her fans in motivating her to give her best, Mukerji revealed that she has embarked upon a new journey in films with her latest hit Hichki (2018), where she played a teacher with Tourette Syndrome.

“With each character, you have to keep rediscovering yourself. For me, my journey of rediscovering has happened right from my first film to Hichki. And from Hicki, it’s going to be another journey ahead,” she said.
Singh (Youth Icon) and Mukerji (Icon of Cinema) were felicitated with special citations at the Forbes India Tycoons of Tomorrow event.

Tweets by @forbesindia
Tycoons of Tomorrow talk about their strategies, beliefs and learnings
TV wars: OnePlus plays it smart