Vishal Gondal's fitness technology company GOQii will include doctors and diagnostics on its platform, and create a unique ecosystem 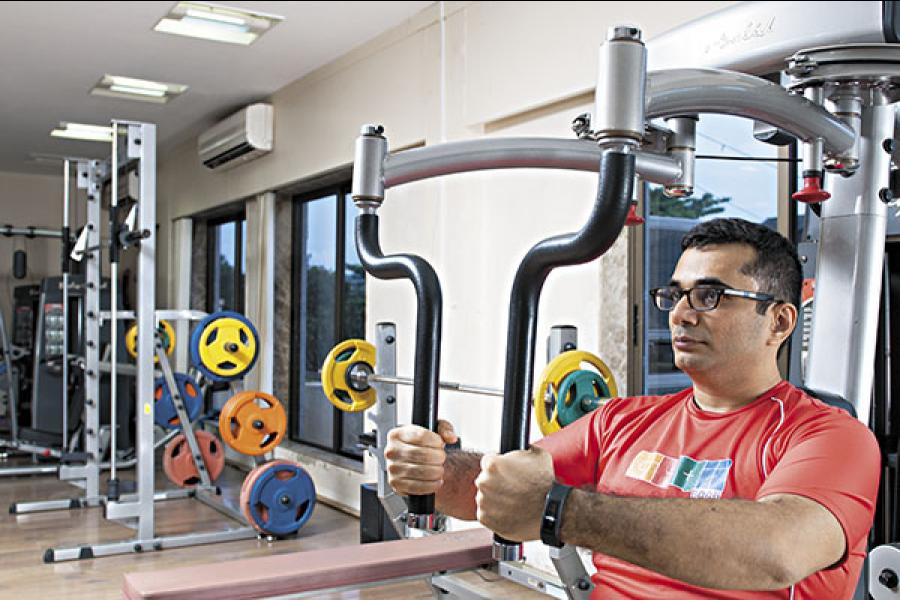 Image: Mexy Xavier
Vishal Gondal, founder and CEO of GOQii, sees his company as a medical and lifestyle partner for its customers

There’s a rubber burger on his table, a placebo to discourage the consumption of the actual thing. A picture of him running a marathon hangs on the wall of his office in suburban Mumbai. There’s another of him at the Mount Everest base camp. You certainly can’t fault Vishal Gondal, 39, founder and CEO of fitness technology company GOQii, for not practising what he preaches. “Everything we tell you to do, we do ourselves,” he likes to say.

Two years ago, when Gondal—who had sold his mobile gaming company Indiagames to Disney for $100 million in 2011—launched GOQii, it was met with a mix of scepticism and intrigue. “Of course, people were doubtful,” he says. The ecosystem Gondal had created with GOQii included a wearable fitness tracker and access to health coaches on a subscription-based platform. The platform itself was hardware agnostic, meaning you could use other wearables brands like Fitbit and Jawbone or even an iPhone to use it. It’s no surprise then that Gondal insists that GOQii isn’t really a wearables company but a broader preventive health care firm. “Earlier, the proposition was the band that comes with the coach, now it is the coach that comes with the band.”

In an interview with Forbes India earlier this year, Gondal had hinted that the purview of GOQii’s operations was set to expand even further. Now, it has. “What we’re doing now is introducing, for the very first time, doctors.” They will be a combination of full-time professionals employed by the company and others who work on a contractual basis. The platform has over a thousand health coaches and soon, says Gondal, there will be over 500 doctors on board. And just as it is with the health coaches, it will be possible to consult GOQii’s doctors over the phone or via video call.

The expansion also includes a tie-up with diagnostics major Thyrocare and a medical partnership with Max Hospitals, an integration wherein, if the GOQii doctor finds any ailment requiring medical intervention, the user can be referred to its partner hospital. The number of such partnerships, Gondal says, will increase over time. “We’re integrating medical records and diagnostics, and also introducing a health risk assessment,” he adds.  All this is also accompanied by the launch of GOQii 2, an improved version of the band, with better battery life and a larger display.

It’s a bold bet: A wearables company that is incorporating important aspects of the health care infrastructure, or a health tech firm that is leveraging the power of wearables. “The idea of doctors online is in itself not radical,” says Bala Deshpande of venture capital firm New Enterprise Associates, an investor in GOQii. “It is the service in combination with other GOQii offerings that will result in creating great impact.” Consider its implications. The health tech sector in India has largely looked to tackle health care’s inefficiencies by improving information about, and access to, doctors. GOQii is moving up that value chain by connecting its various components. “Essentially, GOQii becomes your complete medical and lifestyle partner,” says Gondal.

The reason for this evolution is fairly evident. Over time it became increasingly clear to the team at GOQii, which raised $13.4 million in its series A round of funding in November last year, that “it was all connected”. Users’ health stats were already available on the service, and they were seeking advice based on that. Including doctors seemed like the obvious thing to do. Now, a doctor diagnoses a person’s problem using their data and diagnostic information, and the health coach helps them work on it. “Their clients need to know their chemistry. We are there (for that),” says Dr A Velumani, founder and CEO of Thyrocare. “Our clients need solutions that bring them closer to better indices.” For that, there’s GOQii. In case it is a serious problem and not a lifestyle disease, the user can opt to go to the medical partner, and GOQii, with the permission of the patient, may be able to incorporate all of that data onto its platform.

With all these developments, GOQii could potentially become a comprehensive repository for its users’ health data. Privacy concerns though, particularly with regard to data about people’s health, could be potential stumbling blocks. Gondal thinks otherwise. “None of this data goes to anybody,” he says. “You choose to share it with the coach or doctor. If you don’t want to share it, don’t opt for the plan.” It can still be just a fitness tracker with a health coach, he points out.

It has been a good year for Gondal. A report, released in June by the International Data Corporation about the wearables market in India, put GOQii at the second spot in terms of market share, behind Chinese electronics major Xiaomi with its Mi Band. Of the 400,000 units of wearables sold in India in the first quarter of 2016, Xiaomi clocked 27.1 percent (108,400), while GOQii came in at 18.1 percent (roughly about 72,400 units). Global wearables market leader Fitbit had just 6.2 percent of the market share, though it did have the highest proportion of market value share, given its high-priced products.

Gondal intends to expand the “ecosystem play” further. NFC payments through the device and even health insurance may be on the cards. But it all boils down to “outcomes”. “You may be a health tech company, but if you don’t show positive (health) outcomes, people will use your product for 10 days and then leave it,” he says, predicting that the near future may see several players fail because of this.

GOQii itself could face some fundamental challenges, ranging from privacy issues to scale, and, of course, execution. For now though, it is busy with its expansion spree. As we talk, several engineers and health professionals are preparing for the impending launch of the expanded platform. One of them offers us a preview on a smartphone. Gondal looks visibly pleased. “We did the hard things first,” he says. Startups usually spend millions on customer acquisition and then figure out ways to monetise the service. “We figured out a way to make money and build the platform first.”

Tweets by @forbes_india
Why Uber's capitulation in China is bad for Ola, but good for India
Nita Ambani becomes first Indian woman member of IOC