Qwikcilver has a lion's share of the Indian gift card market. Now, it plans to go global 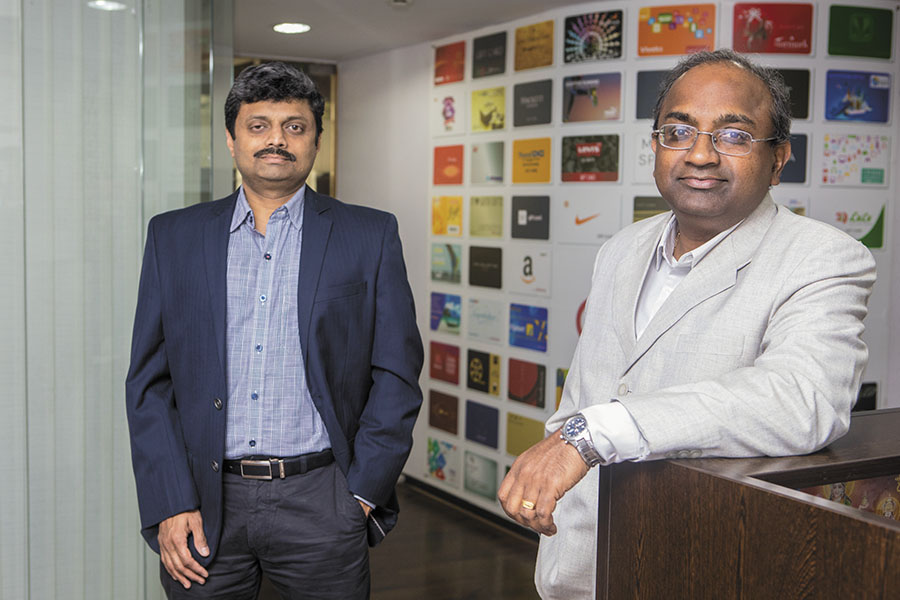 
About ten years ago, TP Pratap, Kumar Sudarshan and Bhaskar Vasudevan faced a universal problem: Finding an appropriate gift for friends and family. “The alternative was gift vouchers,” Pratap, 47, tells Forbes India. They, however, say they found the process cumbersome given the trouble one had to go through to take care of or redeem the paper vouchers. Around the same time, they learnt about the popularity of gift cards in the US, which account for over 30 percent of the total gifting industry there.

Sensing a gap and an opportunity in India, in 2008, Pratap, along with his BITS Pilani classmates Sudarshan and Vasudevan (who has since moved on), founded Qwikcilver, a Bengaluru-based gift card (stored-value cards) technology company. It partners with retailers to provide the backend technology for their gift cards, thereby allowing corporates and customers to purchase and redeem gift cards seamlessly through the brands’ online and offline platforms. Unlike other gift vouchers, which had to be redeemed on a different PoS, Qwikcilver successfully integrated its technology with that of the software provider of the billing system (say Visa) used by the retailer.

The closed-loop and semi-closed-loop gift cards (that can be redeemed at one brand store and at multiple brand stores respectively) are either ‘powered by’ or ‘issued by’ Qwikcilver, depending on the brand’s requirement. “In the case of ‘powered by’, our role is that of a technology enabler and service provider. To give you an analogy—you would have a laptop that says Intel Inside. Likewise, each of these gift cards is powered by Qwikcilver. We are the Intel Inside in the gift card programmes in India,” says Pratap, co-founder and chief marketing officer. “In case of ‘issued by’, we are also legally the issuer of the card; we are using our RBI licence to issue these cards,” adds Sudarshan, 48, co-founder and CEO.

In less than 10 years, Qwikcilver claims to have garnered 90 percent market share—which translates to most of the redeeming in the country. Not surprisingly, what started as a five-member team working out of a basement in HSR Layout in suburban Bengaluru has transformed into a company with 280 people and offices in major Indian cities as well as presence in international markets like Russia, the Middle East and Australia. The company has partnerships with 150 marquee brands—Levi’s, Taj, Oberoi, Hackett, Infosys, Landmark Group, Amazon, Lakme Salon and Häagen-Dazs to name a few—and over 400 corporate tie-ups. Currently, around 85 percent of Qwikcilver’s revenues come from corporate clients and the rest from retail.

If the need for a product or service is repetitive—a salon, for instance—then a gift card for that category will work well, says Pinakiranjan Mishra, partner, sector leader, consumer products and retail, for Ernst & Young–India. Qwikcilver operates in around 25 consumption categories, including hospitality, retail, health and wellness, fashion and food among others. Its commission on each partnership varies from 1-5 percent. Sudarshan says the company is doubling its revenues year-on-year, but refuses to divulge the revenue figures. “We are also Ebidta positive,” he says.

Investors, too, have seen the potential in the company. Qwikcilver raised around $10 million from Accel, Helion Venture Partners and Sistema Asia Fund in 2016. This followed an undisclosed amount from Helion and Accel in 2008 and $10 million from Amazon in 2014, making Qwikcilver the first Indian company the ecommerce giant invested in.

Ashish Gupta, co-founder and senior managing director, Helion Venture Partners, says the investment was driven by “the team quality and the belief that making gift cards more efficient is a valuable problem to solve”. Calling the technology “unique”, he adds, “There is meaningful feedback from large international retailers that Qwikcilver has built the most advanced gift card management platform in the world.”

Building from scratch
The founders had originally planned to source the technology from the US, but it didn’t work out. “They [the partner they had identified] weren’t very bullish about India and we couldn’t zero in on the best business model. So we decided to build the product ourselves,” says Pratap.

It helped that they had the skills for it. After graduation, Sudarshan had worked in the engineering and product delivery departments of companies like Verifone, Aztec and HP; Bhaskar had led IT companies in the architecture of innovative products and Pratap had assumed business and marketing roles in organisations like Wipro, ICI, Timex and Kuwaiti Danish Diary.

Getting brand partnerships, though, was difficult. “When we started out, we literally created a market for gift cards. So we had to figure out who to approach—marketing, sales or finance [departments],” says Kumar with a laugh. Eventually, Qwikcilver struck its first partnership with a small store in Chennai called Rex Fashion.

“Times have changed. It is no longer a one-size-fits-all kind of approach. The number of gifting occasions has also gone up,” says Vinay Bhatia, CEO, group loyalty and analytics, Future Group, which partnered with Qwikcilver last year.

In 2015, going one step further, Qwikcilver launched its own portfolio of gift cards called Woohoo, which can be purchased online and redeemed across several brands which are a part of the Qwikcilver family; some use its technology to power their gift card programmes while others have tied-up with Woohoo. Currently, the revenue split between Qwikcilver and Woohoo is 75:25.

The cards can also be personalised with photos, text or audio. “The payment is made through digital channels after which the card is activated,” says Pratap. Consumers can also buy or sell unused gift cards and convert loyalty points from banks and non-banking financial companies into digital money, which can be used for payment at partner outlets.

The Woohoo offering is popular among corporates, says Kumar. Girish Sivaraman, general manager-national sales development, Britannia Industries Limited, says over the past two years, Qwikcilver has “played a very important role in transforming our CRM initiatives to a new level. It started off by partnering for a loyalty programme, and now it is helping us in other customer engagement as well as employee engagement initiatives.”

A win-win situation
While gift cards are convenient for consumers, there are benefits for brands too, says Pratap. For one, gift cards “productise the experience of brands that are not known for gifting—for instance, Bru Café or a cinema chain like PVR,” he says. Also, he adds, with a gift card, a brand is able to get two customers—the buyer and recipient—who engage with it which leads to additional footfalls. Moreover, often the value of the product purchased is more than the value of the gift card, says Pratap. “We see that when a person comes into the store with a gift card, it gives a brand a sales uptick of 1.6-1.8 times since he typically walks out with goods of a greater value than the gift card. We also see premiumisation, i.e. people don’t buy what they regularly buy,” says Bhatia of Future Group.

It also works well from a working capital point of view, says Pratap, as brands get money in advance for services to be rendered in the future. “If I am a Rs 1,000 crore-company and if 10 percent of my business comes from the gift cards, it means I am getting Rs 100 crore from customers for which I don’t have to pay any interest,” he says.

Competitors like ItzCash have emerged, but no one provides a full-stack service like theirs, claims Kumar. He says the gifting industry in India is estimated to be at $40 billion and gift cards are just about 2 percent of that. “So there is a huge growth potential for everyone,” he says. Pankaj Ukey, director, category management and seller service at EBay India, agrees. “The gift card category is a growing category on ebay.in and we work closely with Qwikcilver to offer consumer-focussed initiatives.”

Qwikcilver is now strengthening its global presence with a subsidiary in Singapore to expand in Southeast Asia. It has also partnered with online electronics retailer Sharaf DG, franchisee businesses of the Al-Futtaim Group, the Lulu chain of malls and others across the Gulf Cooperation Council countries. “In India, Qwikcilver powers nearly every major retailer and e-tailer. Internationally, Qwikcilver has just started working and we have barely scratched the surface in markets like Russia. As these businesses grow and as their gift-card offerings grow, Qwikcilver grows with them. And this has been a healthy trajectory,” says Gupta.

Yet, at the heart of it, it’s all quite simple. As Kumar puts it, “All we are trying to do is change the way gifting is done by using technology.”

Tweets by @forbes_india
The painting room: Where artworks are created
Minding their business: How Indian family businesses survive over time