Runway On The Sea

Mehair, an aircraft venture, plans to expand by having planes that can take-off from both land and water 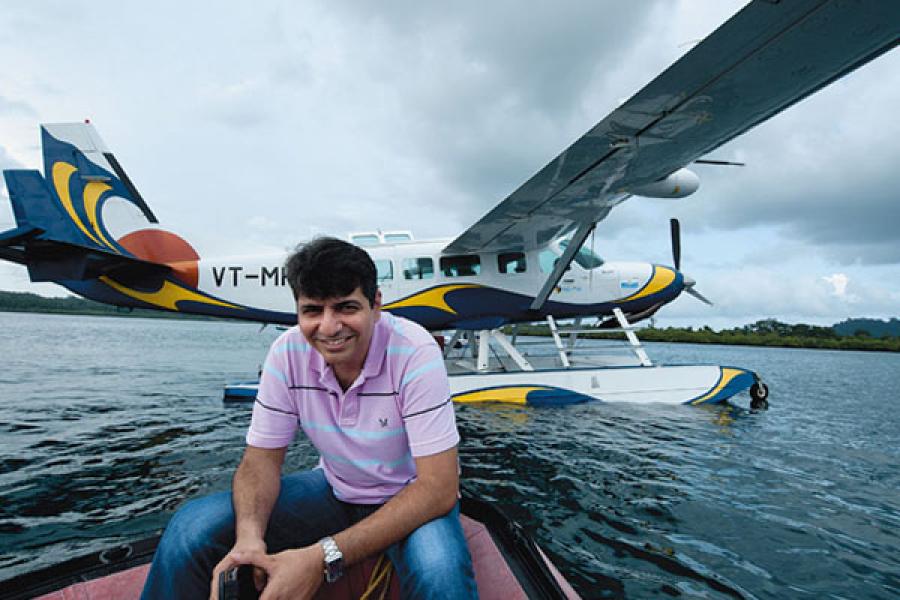 Image: Dinesh Krishnan
Siddharth Verma with the Cessna Caravan 208 at Havelock Island. The aircraft is capable of flying at 26,000 feet, but the flights that Verma operates fly much lower

At this time last year, Siddharth Verma was scouring the world for an airplane that could land on water — except in pictures he’d never even seen one. He had just launched Mehair, an aircraft venture that had big plans with small planes. Most of the aircraft were to be amphibians that reach places without runways, but with lakes, rivers or dams.

Finding an amphibious seaplane — machines that can take off from both land and water — on lease was proving tough. Verma had won a tender from Pawan Hans, the national helicopter company, to operate in the Andaman & Nicobar (A&N) Islands, but no one was willing to lease to an Indian aviation startup. Whether Mehair, named for his mother Meher (and a somewhat forced acronym for Maritime Energy Heli Air Services), would ever take off depended pretty much on this.

Verma’s career was shaped working for two helicopter charter companies, Global Vectra and HeliGo, that cater to the offshore oil industry. Both companies were startups when he joined them and he had helped build them.  He and his partners — C.L. Lakshmanan, a former colleague, and Sukhdarshan S. Mann, who is from the oil and gas business — hoped the Andaman operations would be a precursor to more business in the mainland. When leasing a plane proved impossible, they decided to buy one. They convinced State Bank of India to lend them Rs. 5 crore, and then pooled in the rest.
A year on, the picture has changed. Mehair is making waves and has state governments lining up with plans to use seaplanes, primarily for tourism.
The nine-seater Cessna Caravan 208 that they bought connects Port Blair to Havelock Island, Hut Bay and Diglipur. “For us, the first seaplane was an experiment to improve connectivity among the islands in northern Andamans,’’ says N. Ravichandran, officer in charge of air-operations in the A&N administration. About 43 of the territory’s 200-odd islands are inhabited. It’s been a success and the plan now is to bring in a larger, twin-engined plane to fly to the southern-most tip at Indira Point, he says. The administration also hopes better connections will attract more tourists to the islands.

In the past six months, Verma has been pitching the seaplane idea to states that have a long coastline. He’s been able to convince two — Andhra Pradesh and Maharashtra — to sign MoUs (memorandum of understanding) with Mehair, and has plans to start operations in the capitals of both states by year end. In Hyderabad, Mehair will connect Shamsabad airport to Hussain Sagar Lake in the centre of the city.  There are also plans for flights from the lake to the Nagarjuna Sagar dam and Srisailam, both popular tourist destinations. Verma is now trying to get approvals from the municipal authorities in charge of the water bodies there.

In Maharashtra, the plan is to take off from AAI’s (Airports Authority of India) Juhu airport and land at Chowpatty. The state tourism department, MTDC, wants flights for tourists from Mumbai to Ganpatipule and Tarkali beach in the Konkan. Travel by road takes six to eight hours and the seaplane could cut the time to less than half an hour.

Mehair’s biggest challenge is to find planes and pilots capable of operating them. Also, hiring expat pilots and getting them security cleared is a long process. In the past, Verma had problems when pilots walked out.

To build a pipeline, he’s now hiring young Indian pilots and training them. He hopes to sign MoUs with Gujarat and Goa soon. While the MoUs do not guarantee any seats for Mehair, they do give him exclusive rights to operate seaplanes for three years. He hopes that this will be time enough to consolidate his business and give him a headstart over competition. “The grand plan is to grow to about 25 floatplanes in the next five years,” he says.