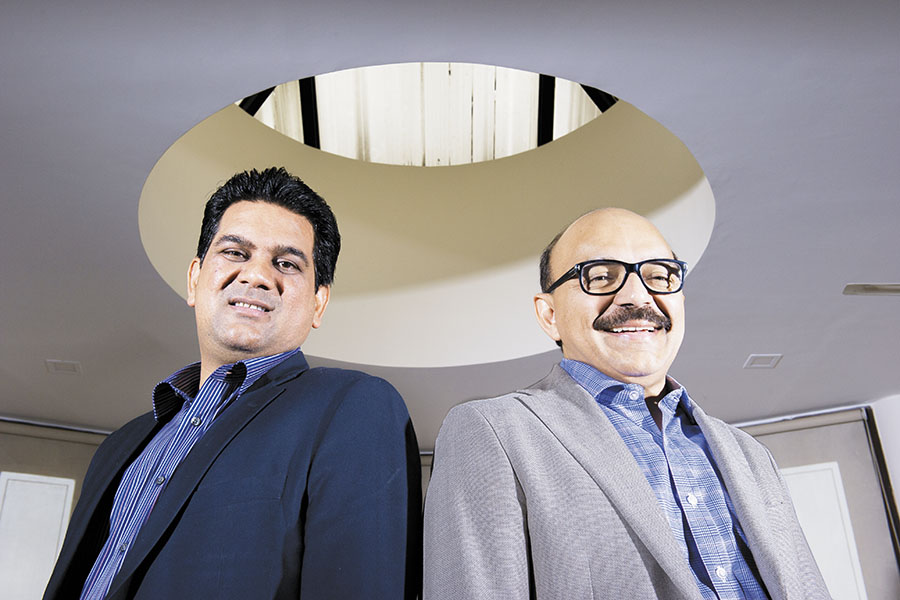 
Himanshu Gupta has a particular fondness for his schooldays. Reason: The third-generation entrepreneur and managing director of publishing house S Chand Group grew up studying textbooks published by his family. “What’s exciting was that I knew in advance about all the books that would be launched in the market,” says Gupta, 38, as he settles down for a chat with Forbes India in the conference room of his south Delhi office which is stacked with board games and textbooks ranging from history and science to literature.

The excitement, however, did not spur any early interest in Gupta to join the company, founded by his grandfather Shyam Lal Gupta in 1939 in a nondescript bylane of old Delhi’s Chandni Chowk as a part of a nationalistic effort to publish Indian authors in colonial times. (It was later managed by Gupta’s father, Ravindra Kumar, and uncle Rajendra Kumar.)

“Although publishing has been our bread and butter, I was not too serious about the business in the initial years,” recalls Gupta, who had brief flings with diverse entrepreneurial ventures after passing out from school in 1996. “While in college [he is a commerce grad from Delhi University], I started something in herbal cosmetics. Then there was the dotcom era in which I created a website [focussed on education]. Finally I discontinued both and couldn’t escape the family business.”

Gupta joined S Chand in early 2000, taking on a leadership role in 2006 after his father’s retirement. In the decade since, he has grown into the position, working closely with his brother-in-law Dinesh Jhunjhunwala, who is executive director. Together, they have adopted diverse strategies to stay ahead of competition. “While I am more aggressive, Dineshji is calm, composed and extremely mature. We operate as a team and that always helps attain bigger goals,” says Gupta.

The most recent achievement is that the Rs540-crore company, after eight decades of operation (“Seventy-eight years to be precise,” says Gupta) made its debut on the bourses in April 2017; S Chand launched its IPO (to raise Rs325 crore) and an offer for sale by existing shareholders, including Everstone Capital, took the total issue size to Rs728.5 crore. The private equity firm invested `260 crore in lieu of 32.27 percent in the company in two tranches—Rs200 crore in 2012 and Rs60 crore in 2015. In the IPO, it sold 21 percent of its stake to garner Rs423 crore and it currently holds about 10 percent in the company.

“This [the listing] is just one of the milestones,” says Gupta. Jhunjhunwala concurs. “In order to stay relevant in a business that’s there for so long, you have to keep devising new strategies,” says the 56-year-old, who married Gupta’s cousin (Rajendra Kumar’s daughter) in 1983.

Jhunjhunwala joined S Chand in 2010. At that time, it was a family-owned, traditional business house that published books on various subjects, with special focus on math and science, and even the Wren & Martin for English grammar. “We were always strong in publishing. But we realised if we have to stay ahead in the race, we have to gradually shift our focus from ownership to management,” says Jhunjhunwala, who drew from his own entrepreneurial experience to help grow the venture. “I lived in Hong Kong and prior to joining S Chand, I was a part of a family business where we would assemble watches,” he says.

From 2011, Gupta and Jhunjhunwala expedited the process of hiring talent from the market to ramp up various divisions within the company such as sales, finance, marketing and mergers and acquisitions. Gupta calls it “a phase when we wanted to consolidate”. “Earlier, we were doing it ourselves… we were providing quality academic books to students. Then, we started looking for companies with similar product portfolios and customers.”

The education publishing sector in India is largely fragmented and, according to S Chand’s estimates, there are about 10,000 publishers in the country today. S Chand is the second-largest player in the market after Navneet Education Ltd, which is also the first Indian publishing company to list on the stock market in 1984.

Navneet has a presence in both the publishing and stationery businesses with a combined revenue of Rs931 crore. S Chand, however, in 2016, emerged as the leader in educational content with a strong presence in the CBSE/ICSE-affiliated and state board schools.

In the unlisted space, S Chand’s peers comprise both multinational companies such as Oxford University Press and Macmillan Publishers and domestic players, including Orient Blackswan and Ratna Sagar.

“In India, customers prefer to take more products from different people rather than more products from the same publisher,” says Gupta. As a result, different brands enjoy strong positions in different categories. S Chand’s strategy to acquire some of the brands that have top-of-the mind-recall in the market helps strengthen its position and spread its wings into the regional market. “We had a lot of width… but not depth. Acquisitions helped us focus on both,” says Gupta.

The defining moment for S Chand came in 2012 when it received funding from Everstone. That made it easier for the company to embrace the inorganic route to expand its operations in the regional market.

S Chand made its first acquisition by buying out Vikas Publishers along with its imprint Madhuban for Rs150 crore in 2012. Subsequently, two key acquisitions were made: One was Delhi-based publisher New Saraswati House that has a strong grip on textbooks in Sanskrit, French and Indian regional languages. The acquisition was completed in two tranches, in 2014 and 2016. Most recently, in December 2016, S Chand acquired a 74 percent stake in Kolkata-headquartered Chhaya Prakashani, which has a significant presence in the West Bengal board.

“We backed S Chand in its vision of consolidating the fragmented education content business, which it has done very well through strategic acquisitions… it is now a pan-India leader,” says Deep Mishra, managing director at Everstone Capital, who is also on the board of S Chand. “We have worked together with them to put structures, teams and processes in place for the next level of growth and have been shoulder to shoulder to ensure a smooth IPO,” he adds.

Today, with a major push toward digital media in education, the company is busy carving out strategies to make itself future ready. “Although these are early days for education in the digital market and not too many academicians are currently trained to adopt the medium on an immediate basis, we are bracing for balancing between our core, print, and the future, digital,” says Samir Khurana, group head, strategy & investments, at the S Chand Group. The company’s current investment in edutech startups is around $5 million. It has invested another $10 million in in-house digital products and services. Its portfolio companies, where it has minor investments, include Testbook, an online test preparation platform for competitive exams, Smartivity Labs which designs activities for children, OnlineTyari that helps students prepare for government exams, and home tutoring service FlipClass.

This puts S Chand on the right path, say experts. “In the publishing space, one of the biggest triggers is the imminent shift to digital. Companies which are investing in this direction will be ahead of the curve. The other driver is the quality of content; companies that are investing on the content and digital side will have a competitive edge,” says Raja Lahiri, partner at Grant Thornton India.

The men at the helm of S Chand are keeping their eyes on the ball. “We want to make sure products are available on time to our customers. Besides, our focus is to try to create a differentiator in the books we publish. We strive to create different designs and work on our presentation,” says Gupta.

It helps that the company has “seven decades of experience in the industry,” says Deepak Jasani, head–retail research at HDFC Securities. “There is a positive brand equity enjoyed by S Chand in the education content space considering the distribution and marketing depth that it has developed.” However, the stock is a tad expensive, he adds. “The negatives include low return ratios, regulatory changes, growing digitisation, seasonality and a history of inorganic acquisitions some of which are yet to pay off,” says Jasani.

Going forward, the journey is about strengthening its presence in the K-12 segment. In 2012, the company saw 50 percent of its business coming from higher education. But the shift has been to K-12, accounting for 70 percent of the business in 2016.

“The change in strategy is deliberate. Education has undergone a makeover. Today, people coming from lower income groups also want to enrol their children in English-medium schools,” says Gupta. In India, there are over 1.5 million schools of which 20 percent comprises private unaided schools. “In the years to come, K-12 will witness maximum growth in the country,” says Gupta.

Tweets by @forbesindia
Why do some innovations stick? Quite simply, because they're better
The second wave of startups