Patu Keswani says he failed as an actor, wasn’t satisfied with working for others but finally found joy filling a mid-market niche in the hotel industry

I had never stayed at this place before. It was the Lemon Tree hotel. The folks at MindTree, Pune, said it is an affordable, full-service hotel just right for business travellers. The place had a really clean bed, a good shower and wireless connectivity — my priorities.

Dinner over, I decided to step out. The security guard cautioned me that there was a large snake trying to cross the road outside and that I needed to be careful. I love wild animals, so I got to the spot where the reptile is, only to find that a very alert-looking stray dog had chased it away in the meantime. The snake had gone into hiding and the dog was relentlessly looking for it. I tried patting the brave dog but he refused to be distracted from his mission. 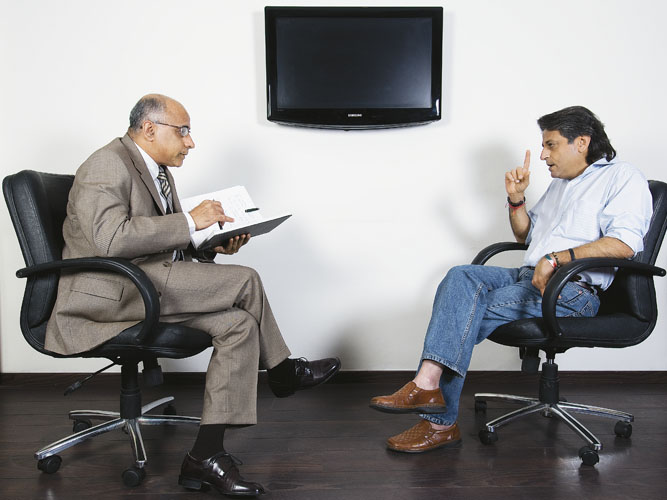 Image: Amit Verma
Patu Keswani, Founder, Lemon Tree Hotels
The next morning, I found the same canine sitting inside the hotel compound; this time he was more affable. A young man noticed my affection and volunteered, “Sir, his name is Tommy. He is on our K9 Board.”
K9 Board? I nearly tripped. The man explained, “You can find him on the Web site of the hotel; he is in charge of security.” That night, I logged on to the site and found that it was true!
I immediately decided that I must meet Patu Keswani, the entrepreneur who started the hotel because, in India, I seldom come across a business that is also in love with life!
So here I am, sitting across Patu Keswani, the man who founded Lemon Tree, a hotel chain with 13 properties, 1,300 rooms and 1,700 people. He has built all of this in the last 10 years.
“I was born to a railway engineer father and a doctor mother. I was a good student. My sisters are theatre and screen actors. I tried acting in a couple of plays but always froze before the audience, so I missed out on my family profession so to speak. Actually, I saw myself as a failed actor.” So Patu Keswani took the long route to self-discovery, studying engineering and then MBA at the Indian Institute of Management.
“Most of our relatives were doctors and engineers. Business was never an option. So after my MBA, I joined the Tatas in 1983 and worked with the Taj Group until 2000. I left to join A.T. Kearney, but then I realised I wasn’t cut out to be a consultant. I even went back briefly to Taj but left very quickly. I was suddenly getting tired of what I was doing — a sort of mid-life crisis. I wanted to do something where I would wake up in the morning and do something I would really enjoy.
“So, one day I decided that I wanted to be an entrepreneur. I did not have any big dream. I wanted to build a small hotel in an unusual space. I was very clear what I wanted for myself. I was 42 years old and I guess I was at an inflection point of life.
“One day, somebody told me that there was a small plot available for Rs. 1.25 crore.  I don’t think anybody in India would have conceived of a hotel coming up there, because the total built-up space would have been about 15,000 square feet. But I felt that was exactly what the Indian hotel market needed at that point in time. I felt that the Indian hotel market was like the car market of 25 years ago. If you wanted a great product, you needed to pay an extremely high price like buying a Mercedes.
At the mid-market level, there was the Ambassador, the Fiat and the Herald. And of course, for the common man, there was the scooter. So in the hotel context, for the Mercedes, there were the Oberoi, Taj and ITC options. For the scooter, there were guest houses. For the in-between, there was nothing really. I thought that if I could create the hotel equivalent of a Maruti 800, I could cater to the bottom quartile of 5-star users and the top quartile of guest-house users.
“As the COO [chief operating officer] at the Taj Business Hotels, I was always trying to see how I could improve their performance. I asked each hotel to present their attributes in ratios, and see which hotel was performing the best. I would just take the best function of each hotel. I then created the hypothetical 20-point hotel which combined the best of these 21 hotels. This hypothetical 20-point hotel could survive any downturn if only we could make some costs as variable. This is how in my mind I designed a hotel that could be successful in all parameters.
“So, when I saw this plot, I decided I was going to build this ideal hotel. I started designing this hotel which was to be mid-market and ratio-driven. We built it in 14 months. It worked. It gave a return of 30 percent on equity. So, we bid for a second location in Gurgaon. We built another hotel with 50 rooms for Rs. 13 crore which was more up-market. And then the next and the next.
“In February 2003, there were just 10 of us. We talked about what our company would stand for. The key was to have a culture that was employee-centric from the word go. I was very clear that this company is not going to be owner-driven but I wanted it to be very professionally run. We built a very simple equation — my job is to take care of the employees, the employees’ job is to take care of the guests and guests would then take care of the returns.”
I ask Patu Keswani how it feels to be where he is today? What has been the high point for a man who staked it all when he refused a comatose corporate existence?
“To me, the greatest satisfaction is the employment I am able to create. When we were 500 people, one day I told my HR folks that I want 4 percent of our company to be deaf and mute. We hired 20. Today we are 19 deaf and mute people. They are highly dedicated and only one has left us. We treat them with dignity and pay decent salaries. I could hire a thousand more such people. My next step is to get them to interact with guests confidently and without apology.”
The man in front of me has his stage set. His script is well written. His cast is in place, humans and animals. His is a sold-out show for sure. This man is no failed actor!