Sanjeev Kapoor did not always want to be a chef. But he always wanted to do something different 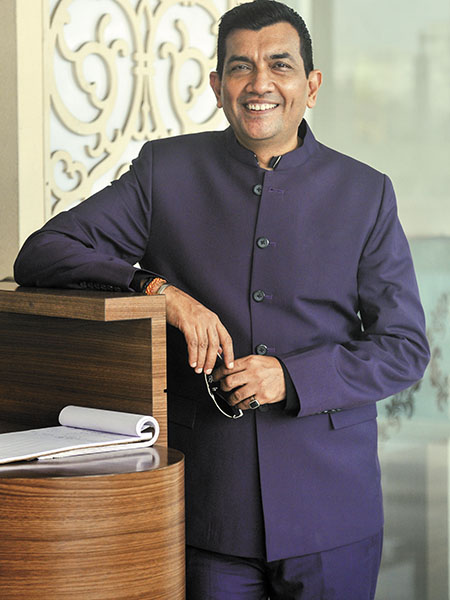 In 1992, a new television phenomenon began to take urban Indian homes by storm. The hero of the show did not sing and dance, or romance pretty women, or beat up villainous characters. And yet, women (mostly) would go into a tizzy to not miss him on screen. Dressed in white, with a perpetual smile on his face and a ladle in hand, he taught his audience how to cook. Sanjeev Kapoor was, perhaps, the unlikeliest and, yet, one of the most successful matinee idols that Indian satellite television has ever produced.

Bursting onto the scene with Khana Khazana, a show that ran for 18 years, Kapoor became the country’s first television celebrity chef, with a following that runs into several millions. And while his status as India’s best-known face behind a cooking stove continues, he has built himself a business empire spanning a 24-hour food channel, manufacturing premium cookware, selling a range of bottled gourmet goodies, and authoring scores of cookery books. Also tucked under his toque blanche are awards and nominations from national and international organisations alike.

And yet, cooking was something that Kapoor gravitated towards more by a process of elimination, rather than of selection.

Back in the 1980s, Kapoor had the choice of opting for a ‘normal’ profession. “Normal would typically mean becoming an engineer or a doctor,” says the 52-year-old, whose father worked with the State Bank of India and mother was a homemaker. But with the urge to do something different from everyone else, Kapoor—despite the option of becoming an architect after gaining admission at Delhi’s School of Planning and Architecture in 1981—decided to pursue a degree at the Institute of Hotel Management (Pusa) instead. “People laughed at me then,” he remembers. “There were no chefs in those days… I wanted to attempt something that no one in my family or friend circle had thought of. That’s the only reason I decided to pursue hotel management.”

But even after studying hotel management, cooking was nowhere on his radar. “It was not even a distant hobby,” he recalls. And the only reason he opted for the kitchen was because the rest of his classmates opted for the front desk. Standing out among his peers was perhaps also the reason why Kapoor managed to become the executive chef of Centaur Hotel in Mumbai at the age of 28, a designation that chefs usually attain by the time they are in their 30s. “I reached the top very early in my career. I could never follow, I could only lead,” he adds, confessing that he became a chef even though he “wasn’t always great at cooking.”

“Sanjeev Kapoor is a celebrity masterchef who has made the job of a chef very respectable and glamorous, much before the food revolution started in India,” says Anjan Chatterjee, founder and managing director of Speciality Restaurants that owns restaurant chains such as Mainland China and Oh! Calcutta.

Kapoor’s quest to do more saw him embark on the next stage of his journey. “Television also happened to me by a stroke of luck,” he says. Kapoor’s television stint began when Zee TV approached him in 1992 to do a cookery show for the channel. “They approached several other people, but I managed to bag the show,” he says. Initially, Khana Khazana was called Shrimaan Bawarchi, a name that “I did not like at all,” he adds. After a lot of thought, it was changed to Khana Khazana, a name that Kapoor himself suggested to the producers.

Those were the days when satellite television was beginning to transform the social and political landscape of the country. Khana Khazana was an hour-long show, initially aired once a week, and won millions of hearts with exotic recipes and simple cooking techniques. It went on to become the longest-running cookery show on television in Asia and garnered over 500 million viewers. The show ran for a record 18 years and was broadcast in more than 120 countries. “After Bollywood and cricket, if anything is entertaining, that’s food,” says Kapoor. “Globally, too, food sells.”

Kapoor’s long-standing association with television cookery shows culminated in him launching his own 24-hour food channel Food Food in 2011 that today reaches more than 40 million households. However, in May this year, Kapoor divested a majority stake in Food Food to Discovery Communications India. The transaction is in the final lap and is currently awaiting regulatory approvals. Once it comes through, Kapoor will retain a minority stake in the channel.

Besides, he also runs Wonderchef—along with Ravi Saxena, co-founder and former CEO of Sodexo India—a brand of premium cookware, appliances and kitchen tools. The enterprise is backed by Zurich-headquartered investment firm Capvent.

Wonderchef was launched in 2009 and through four main channels—retail and general trade, television sales, online sales and direct-to-home sales—via a network of over 40,000 all-women workforce, and more recently through boutique stores.

If all this wasn’t enough on his plate—“I like doing different things to break the monotony,” explains Kapoor—he has authored around 200 cookbooks, mostly in association with Popular Prakashan, and has sold more than 10 million copies. Besides, he sells a range of food products, including pickles, blended spices, ready-to-cook mixtures and gourmet chutneys that were launched in 2001 under the brand of Sanjeev Kapoor Khazana, and also runs a production house called Khana Khazana (launched in 2000) that creates content for digital platforms and television shows. His website sanjeevkapoor.com gets up to 10 million views each month, while his YouTube channel Sanjeev Kapoor Khazana has more than 1 million subscribers and more than 3 billion views.

Kapoor is also a celebrated restaurateur. He forayed into the space in 1998 when he opened his first restaurant Khazana in Dubai. Today, he runs 59 restaurants under six brands, all of which come under the umbrella of SK Restaurants. These include The Yellow Chilli, Signature by Sanjeev Kapoor, and Hongkong.

Kapoor has won several awards and government advisory contracts. In 2005, he was chosen by CNN as one of the top five celebrity chefs in the world, the others being Heston Blumenthal, Gordon Ramsay, Jamie Oliver and Wolfgang Puck. More recently, he was flown down to Abu Dhabi to prepare a vegetarian meal for Prime Minister Narendra Modi.

Having spent 32 years in the industry, Kapoor has experienced, first-hand, the changes it has gone through. Initially, he says, it was everyone having Indian food. But today, with rising disposable incomes among the average Indians, and a booming overseas tourism industry, people are more open to exploring and soaking in new cultures.

This perhaps explains the mushrooming of restaurants that cater to diverse taste preferences. “Food is travelling across borders,” says Kapoor. Consider India itself: Apart from Indian food, there is a variety one gets to choose from, including Japanese, Korean, Italian and Greek.

“The Indian food industry has evolved significantly over the last two decades—new formats have emerged, service levels have improved and supply chain practices have become more efficient,” says Rajat Wahi, partner and head of Consumer Markets at KPMG. “A number of foreign and domestic players have set up their base in the country, owing to the prevalence of a number of opportunities in various areas of the food service industry.”

Echoing the same sentiment, Speciality Restaurants owner Chatterjee says, “The entry of young diners has created space for all kinds of global and modern Indian cuisine. The new globalised India has brought in the trend of eating and drinking out like never before.”

With economic liberalisation, India started witnessing a change in the early ’90s, a time when an Indian version of Chinese cuisine was the only popular ‘foreign food’ available around the country. European fare, called ‘continental’ food, was mostly restricted to a few restaurants, clubs with colonial legacies, and high-end hotels. Even buffets did not exist. “Food is more about meeting aspirations, and establishing a lifestyle and status,” says Kapoor, who, after launching into a brief history of how lifestyles have evolved in the country, points out to the slew of cookery shows on television today, something that he pioneered in India over two decades ago.

So, what is it that takes to be a successful entrepreneur? “A first-mover advantage always helps,” says Kapoor. Besides, it is also the ability to adapt to change that’s absolutely critical to go to the next level, an ability he developed in his childhood when his father had a transferable job. Born in Ambala, in Punjab, Kapoor moved with his family to Delhi, and then to Meerut and Saharanpur in Uttar Pradesh. “As a banker, my father never stayed in one place for more than three years, and that has helped me adjust to change seamlessly,” he says.

While the love for cooking is a talent that Kapoor acquired, it is the creativity associated with it that keeps him motivated. “I don’t have a favourite dish,” he says. “Why would anyone like to eat the same dish twice… It’s like listening to the same joke again,” he says.

And for someone who always has one pot simmering with a new venture, the banquet is yet to be served.

Tweets by @forbesindia
Here's why the Bansals of Flipkart are out of the India Rich List 2016
Breaking bad: How the world of villains has changed