Sunil Chhetri: In the big league

Football player Sunil Chhetri is ranked No. 100 on the 2017 Forbes India Celebrity 100 list 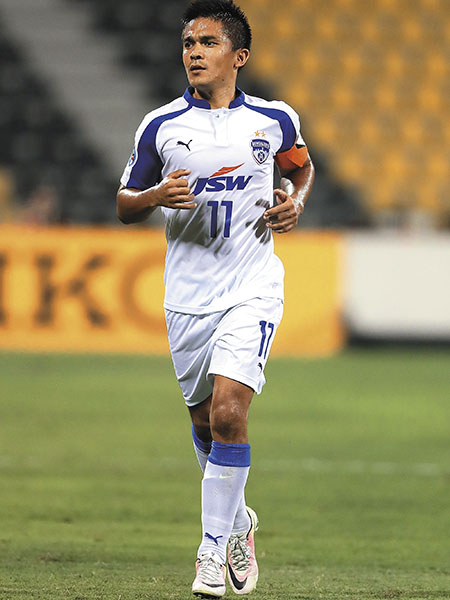 The skipper of India’s football team and its most capped player, Sunil Chhetri is also the fourth-highest international goal scorer among active players. The 33-year-old achieved the feat with his match-winning strike, his 53rd, against Myanmar in March, equalling England’s Wayne Rooney (who is now retired). He subsequently added more goals to his tally to surpass Rooney and now trails only Portugal’s Cristiano Ronaldo, Argentina’s Lionel Messi and USA’s Clint Dempsey. With his prolific scoring in the qualifiers, Chhetri has also led India to the 2019 AFC Asian Cup, the first time since 2011. At home, Chhetri is one of the most expensive buys in the Indian Super League (ISL), with Bengaluru FC snapping him up for a reported ₹1.5 crore to steer the club in its inaugural outing at the prestigious league