Thespian Prashant Prakash brings theatre to the audience, and vice-versa 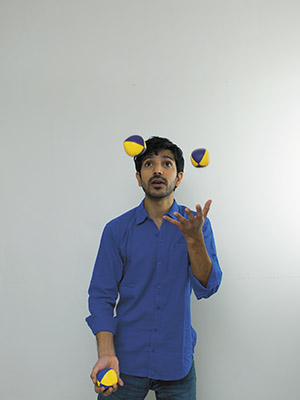 Image: Mexy Xavier
“I am always trying to learn new skills,” says Prakash. At present, he is trying his hand at juggling

Prashant is someone who is willing to fight his fears,” says theatre director Arghya Lahiri. “If something does not make sense, or the lines don’t make sense, instead of falling back on something familiar, he is willing to push his own limits. That is something that you rarely see in theatre, or even in life.”

That Prashant Prakash is someone who works really hard at the roles he enacts is something you get to hear again and again. The actor, who took to stage while in college in Mumbai, does not have as many productions or shows to his name as perhaps others in the industry, but what sets him distinctly apart is the fact that he is working towards developing a new construct in theatre, one that has not been explored in India.

Having started Crow, a theatre company, along with his partner Nayantara Kotian, Prakash aims to change the way theatre is experienced. Immersive theatre, as this new construct is called, is staged in alternate venues and is one in which the audience is invited to be a part of the production. “We could, for instance, stage the play in a subway, or in an art gallery,” says Prakash, of Crow’s maiden production The Bliss of Solitude, which was staged in London in 2014, and which he hopes to stage later this year in India. “There has to be a sense of improvisation, because you don’t know how the audience is going to react.”

Prakash has never conformed to a standard script: He worked with Atul Kumar’s The Company Theatre in Numbers in the Dark, an example of ‘devised theatre’, for the Prithvi Theatre Festival in 2006; another play, Hair, started out as devised theatre but finally took on a scripted form.

But Prakash, regardless of his talent on stage, has not limited his work to that of an actor alone. As co-founder of Quaff Theatre—along with Kotian and actress Kalki Koechlin—he has co-written The Skeleton Woman, co-directed The Real Inspector Hound, and produced Satellite City. “It helps to be involved in peripheral work,” says Prashant. “But I like acting too much.”