At 23, Ranjeet Rajwada measures up to the likes of Ghulam Ali and Pankaj Udhas. He is a part of Forbes India's 30 Under 30 list. 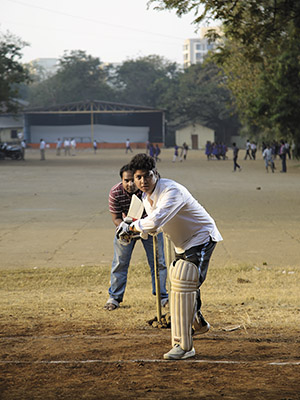 Image: Joshua Navalkar
Whenever Ranjeet Rajwada goes back to his hometown Jaipur, he pads up for a game with his friends

When you call Ranjeet Rajwada on his mobile phone, you hear him even before he receives the call. A lilting melody greets you—his latest single track, ‘Mast maula’, is his caller tune.

At 23, this ‘Prince of ghazal’ can be granted his indulgence.

“Ranjeet pulls audiences as large as the veterans do,” says Durga Jasraj, director and founder of Arts And Artistes, an event programming company. “Although he is very young, an age when most singers are still in ‘student’ mode, Ranjeet has been able to develop an individuality of his own. And he is also more traditional than many of the older singers because he sings mostly in Urdu and chaste Hindi.”

Rajwada shot into the limelight as the only ghazal-singing participant in two television shows, Idea Jalsa and SaReGaMaPa, in 2010, winning mass adulation and recognition.

“There was a massive response from the audience,” recalls Rajwada, who completed a solo tour of the US last year; in 2011, he went on his first world tour. “No one had heard a ghazal singer on the show before, and it was apparent that they were touched.” That a boy barely out of his teens could command the respect and love of his audiences was unusual, but what was more remarkable was that he sings ghazals, a genre associated with complex meaning and detail, vocal finesse and maturity. He has subsequently received several awards and has shared the stage with the likes of Ghulam Ali, Pankaj Udhas, Talat Aziz and Anup Jalota.

But the journey has been an arduous one. Originally from Jaipur—where he grew up listening to his ghazal-singer father Mahesh Rajwada, and training under him—Rajwada moved to Mumbai in 2005. “I had met Kishori Amonkarji in Jaipur and she had advised me to move to Mumbai to pursue singing,” says Rajwada, who trained under Amonkar between 2005 and 2008. But getting a toehold in the singing circuit was hardly easy. “I would go to private mehfils [gatherings], taking my harmonium along, and perform for no money,” says Rajwada, recalling days of disappointment and doubt. “Sometimes I would be at a loss [to know] as to what the future held.”

But those days are now a thing of the past. Rajwada remembers the affection he has got from industry stalwarts such as Lata Mangeshkar and Sonu Nigam—“he gifted me my tanpura”—and is basking in the appreciation of his audience.

Tweets by @forbesindia
Gizmo junkies, tech firms have you on their radar
Stay invested in the markets, despite global challenges