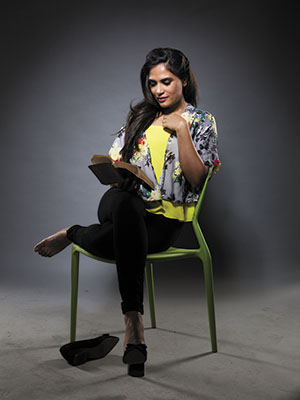 Image: Joshua Navalkar
Reading is one of Richa Chadha’s hobbies. Here, she’s seen reading Midnight’s Children, the book that her father gifted her mother during their courtship


Richa Chadha did not have an inkling that Gangs of Wasseypur (2012) would go on to become a cult film when she signed on for the movie. It also proved to be the turning point in her career; Chadha’s performance as Nagma Khatoon—a role she describes as her most challenging—propelled her into the limelight.

Following her career-defining performance in Masaan (2015), the actress was invited to be part of an elite jury at the Marrakech International Film Festival in Morocco last year. “It was one of the best experiences of my life,” says Chadha.

Having completed her honours in History from Delhi’s St Stephen’s College in 2005, her parents thought: “Her acting craze would go away”. But for Chadha, it was her “soul’s calling”. She refused a full-time job with a magazine, offered to her while pursuing a media course from Sophia College, Mumbai, in 2007. She even walked away from a reporter’s job with a TV channel after a day. She was perhaps destined to make her mark in front of the camera.

As an actress, Chadha has been acclaimed for her work in Gangs of Wasseypur, Fukrey (2013) Main Aur Charles (2015) and Masaan among others. “It was brave of Richa to choose the role in Masaan knowing that it’s not going to be an instantly likeable character… that comes from the intelligence she has as a person,” says Masaan director Neeraj Ghaywan.

Confidence is another trait that’s held her in good stead. “I am nervous in my vanity van before a tough scene, but not in front of the camera,” she says.

Success has started trickling in, but Chadha says the struggle starts now. “I don’t want to be like [the painter] Vincent van Gogh where I die and people say, ‘Oh, she was so good’. I don’t have to die for that.” She’ll soon be seen in Cabaret and as Sarabjit Singh’s wife in the biopic on the Indian convicted of terrorism in Pakistan. She needn’t worry, the Van Gogh analogy won’t hold.