Ong Chih Ching is everything a Singapore developer usually is not 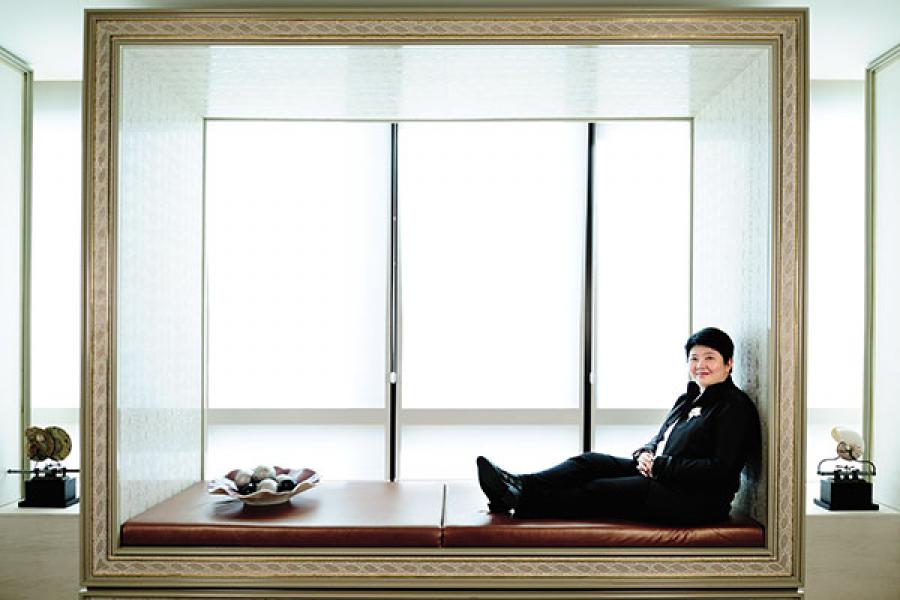 Ong Chih Ching isn’t big on run-of-the-mill projects. In 2018, the executive chairman of Singapore developer KOP Ltd plans to open the first phase of Northernlight, a fantasy-like, mixed-use development on a 1,80,000-sq mt site in Shanghai that will boast of Winterland, the world’s largest indoor ski slope (and a beach club), as well as theatres, serviced apartments and offices.

That lofty ambition has an estimated price tag of S$2.8 billion, a huge sum for a relative upstart amid the conservative development sector in Singapore. “All your dreams can come true if you have the courage to pursue them,” says the 45-year-old former lawyer, quoting her biggest idol, Walt Disney.

Since its start in 2006, Ong’s pursuits have brought KOP The Cranley Hotel in London and Montigo Resort on Indonesia’s Batam island, as well as the Hamilton Scotts flats in Singapore, which garnered international attention with its en suite sky garages.

Montigo, an 88-villa development about an hour’s ferry ride away from Singapore, is running at full occupancy on most weekends and attracting bigwig patrons such as “ministers from Singapore” and Hollywood actors Russell Wong and Joan Chen, says Ong, who plans to scatter the brand more widely, starting with Bali, then China.

Her plans keep raising eyebrows. Some analysts believe Northernlight Shanghai, in particular, is a reach as its price tag is 20 times the market cap of KOP Ltd, a property unit of KOP Group that Ong listed on the Singapore exchange last year through a S$150 million reverse takeover of entertainment company Scorpio East Holdings. (Ong owns a 37 percent stake in KOP Ltd.) The market cap has slid a bit since and is tiny compared with Singapore developers such as CapitaLand and City Development.

It managed a profit for the December 31 quarter, but revenues are still at an estimated S$20 million annual rate. Ong declines to provide financial data for privately held KOP Group, which prior to the unit listing was said to be managing S$3.1 billion in assets with S$101 million in annual revenue. (It also owns a luxury-yacht charter business and was part of a consortium that acquired most of Prudential Tower in Singapore for S$512 million last year.)

Mainland China has an appetite for attractions such as Northernlight, says Jonathan Galaviz, partner at hospitality consultant Global Market Advisors, but “one might question the overall financial feasibility of this project”. “Similar concepts exist in Dubai and a few other locations in the world, but not at the scale or scope that they are contemplating. Generally speaking, the return on investment for these projects has historically been low.”

But Ong has her believers. “The integrated indoor ski resort is an interesting project on a scale that only Chih Ching would dare to contemplate. There is already a buzz and anticipation about the project,” says George Lim, a private investment company director in Singapore, adding that she is a “born leader”. Lim was an investor in her earlier projects.

Ong understands that given the big reach, “People are going to be like: ‘Are they freaking dreaming?’ So until such time that they actually see how we execute it, they will not be able to appreciate it.”

Gumption is her trademark. As a 26-year-old lawyer, when her boss declined to increase her monthly pay from S$2,900 to S$3,500, she quit and started her own firm with a friend. Within two years, she had 11 lawyers working for her.

The deals started to flow. In the late 1990s, she worked on a securitisation with the general manager of Wisma Development—owner of a mall in Singapore where she’d had a side business in retail. “Our cheque writers could not even fit S$160 million”—the firm was more in the S$10 million or below league. Moreover, the Wisma contact had Mideast connections, and soon Ong was working deals for sheikhs.

In 2006, she plunged into residential property development, acquiring a plot of prime land just off Orchard Road, Singapore’s main shopping belt. The newbie needed to work with an established brand. After nine months—what she says were 6,000 emails and workdays that sometimes stretched until 4 in the morning—she persuaded Ritz-Carlton to build its first residences outside North America. “The learning curve was very, very steep,” she admits, noting that at that time she was only 36 while her business partner, KOP Chief Executive Leny Suparman, was 31.

Ong says she put S$1 million of her own money into the Ritz-Carlton Residences. Through family and wealthy contacts, she pulled together a further S$27 million. One of her early investors was a unit of the Al Naboodah Group, one of the largest construction companies in Dubai. Ong declines to say how much the project cost but says the land was acquired for just over S$100 million.

By the following year, she’d left legal work, as there was another tempting hometown real estate opportunity: “Hamilton Scotts was very famous,” says Ong. “I think people at that time were into collecting luxury properties. Singapore was a natural destination for them.” She recalls, “We had a lot of blank cheques. We felt on top of the world.”

The feeling was short-lived as 2008 brought the Lehman Brothers collapse and subsequent global economic crisis. It was also a time of rising construction costs in Singapore, but by closely managing expenses, Ong delivered the two projects on time and on budget. Unkind local rumours about KOP’s business prospects didn’t daunt her. “You will always have naysayers in the world. I have learnt to ignore them. I will have the best laugh in the end because I will make it happen at some point.”

Ong’s personal pastimes also reflect a game spirit. She went to the UK to do her A-levels, then got a law degree from the University of Buckingham. While abroad, she developed a passion for car racing. Today she owns an Aston Martin and dreams of a Bugatti.

Perhaps she is still playing catch-up from a conservative childhood. Her late father ran a roller-blind business now managed by her younger brother. “My dad was very strict with me. Everything I did was always not good enough,” she says. “I think in a way it was good. I am naturally rebellious. If you ask me not to blink, I’ll start blinking. It’s in my DNA… I always tell myself: ‘Okay, I’m going to beat you’.”

Tweets by @forbesindia
Noni Purnomo and the tale of Indonesia's biggest taxi operator
Mayumi Kotani: A woman in Japan's patriarchal world of manufacturing