As consumers warm up to spending big on their children, luxury products and services for tots are emerging in India 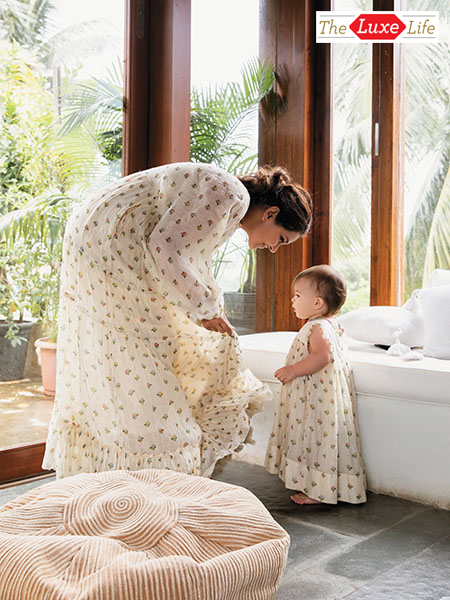 Actor Lisa Rani Ray and her child in a Chota Péro creation by Aneeth Arora
Image: Ankit Chawla
In its 2018-19 annual report, British luxury fashion house Burberry announced revenues of £120 million from its children’s line, up from £77 million in 2015. While total revenues had increased by 20.94 percent in this period, revenues from the children’s line had jumped 54.4 percent. The numbers, perhaps, justify the fashion house launching its children’s wear in 2001.

While till the first decade of the 2000s, brands such as Mothercare, Gymboree, Children’s Place and The Walt Disney Company had catered to the market of children’s wear, accessories and toys, it was in the following decade that design houses and high-end fashion labels such as Balmain, Dior, Gucci, Fendi, Dolce & Gabbana and Givenchy began to launch their children’s lines. It helped that children of Hollywood actors, music and TV stars became celebrities in their own rights: Victoria Beckham’s youngest child Harper, born in 2011, did not repeat an outfit until she was 15 months old, while Beyonce’s daughter Blue Ivy Carter, 8, and Kylie Jenner’s 19-month-old daughter Stormi often dress in the same luxury couture designs as their mothers.

Luxury wear for children is now beginning to find creators and takers in India too. And customers are opting for child-friendly fabrics and materials, cuts and quality, even services and off-the-shelf products.

“I started Chota Péro in 2008 with little experience,” says Aneeth Arora. “I thought I could make children’s clothes with the smaller pieces that are wasted from women’s wear and make a business out of it, but soon realised that it is not an economical exercise. In fact, doing children’s wear is way more expensive, and there is a lot of wastage.” Like for her women’s wear, she uses natural fabrics such as cotton, wool and silk for children’s clothes. “People saw that these fabrics are apt for kids and appreciated the aesthetic and silhouettes,” adds Arora.

Other designers who have started separate clothing lines for children include Ritu Beri, Payal Singal and Gauri & Nainika. “Indian designer wear for kids is still a developing market,” says Singhal, who founded PS Kids in 2010, almost a decade after starting her women’s wear brand in 1999. “Until recently, Indian parents largely bought branded Western clothing and non-branded traditional wear for kids. This is now changing.”

Singhal started designing for children after she became a mother and realised there was a dearth of designer Indian wear for children. “Most of what was available in the market were miniaturised versions of adult occasion wear,” she says. “All the fabrics at PS Kids are tested to ensure they are itch- and pinch-free, and the fastenings are easy for children to get in and out of. Each ensemble is age-appropriate and adaptable.” These clothes, made for children aged between two and 10, range from ₹3,000 to ₹35,000.

“Indian parents are ready to spend money on luxury clothing for special occasions and festive seasons,” explains Arora. “But when it comes to casual wear, they are not willing to spend.”

The children’s luxury market also includes skin and hair care products, and bed linen, as well as spa services. Forest Essentials, which was launched in 2000 as a luxury ayurvedic brand of beauty products, launched its Mother & Child Care range in 2014. “Parents are more cautious than ever before. They scrutinise the labels and certifications before buying products. Our Mother & Child Care range has been certified by ‘Made Safe’, a seal of purity that validates our formulations as chemical free and absolutely safe for babies and mothers,” says Mira Kulkarni, managing director of Forest Essentials. These products, made from ingredients such as fresh aloe vera juice, kokum butter, virgin coconut oil, herbs, roots and flowers are available for newborn babies to seven-year-olds and are priced between ₹700 and ₹2,000. 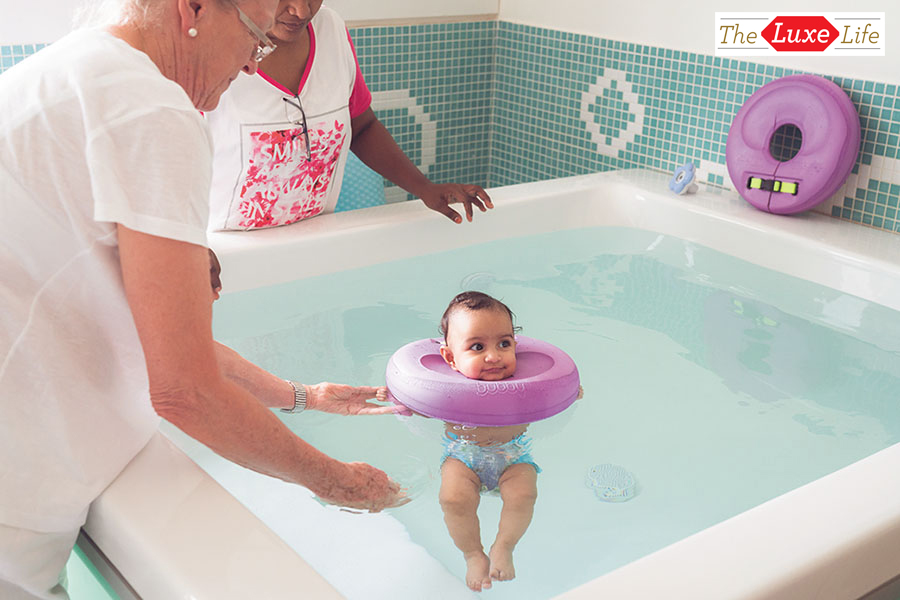 In keeping with the theme of skin-friendly products for children is Masilo, started in 2016 by Eisha Maskara Sheth, whose family is in the textile business and who realised the limited choices available in this segment. “We create organic cotton essentials for little ones. Our product range includes cot bedding, baby nests, clothing, swaddles, sleeping bags, etc, along with nursery décor accessories,” says Sheth, who uses fabrics that are certified by the Global Organic Textile Standard. The range, which costs between ₹650 and ₹15,000, is meant for newborns to seven-year-olds.

Luxury spa treatments for babies have also emerged within this segment. Last August, Swathi Kolla, whose family has an automobile dealership in Hyderabad, opened a franchise of the London-based YourBabySpa in the city. “We provide a nurturing environment for babies between the ages of two days and eight months,” says Kolla. “Our aim is to help the baby thrive in womb-like comfort, as the hydrotherapy sessions are done in a temperature-controlled pool that provides warmth and comfort, which is similar to the environment inside the womb. This helps the baby relax, explore new stimuli, and grow.”

The massage and hydrotherapy sessions, each of which costs ₹4,012, are designed and monitored by paediatricians, neonatal experts, and child development specialists to suit individual babies. “We have had an average revenue of ₹6.5 lakh per month, which comes from 130 to 140 customers,” says Kolla. “We have a profit margin of around 60 percent, with a monthly growth of 6.7 percent.”

“There aren’t too many homegrown luxury brands for children in India, so customers have to rely on imported brands, which are often limited in their products and availability,” says Sheth. “We are looking to change that.”