Time without end: Iconic timepieces with a rich history

The luxury watches featured here have nothing to prove. The decades gone by validate their popularity and iconic status 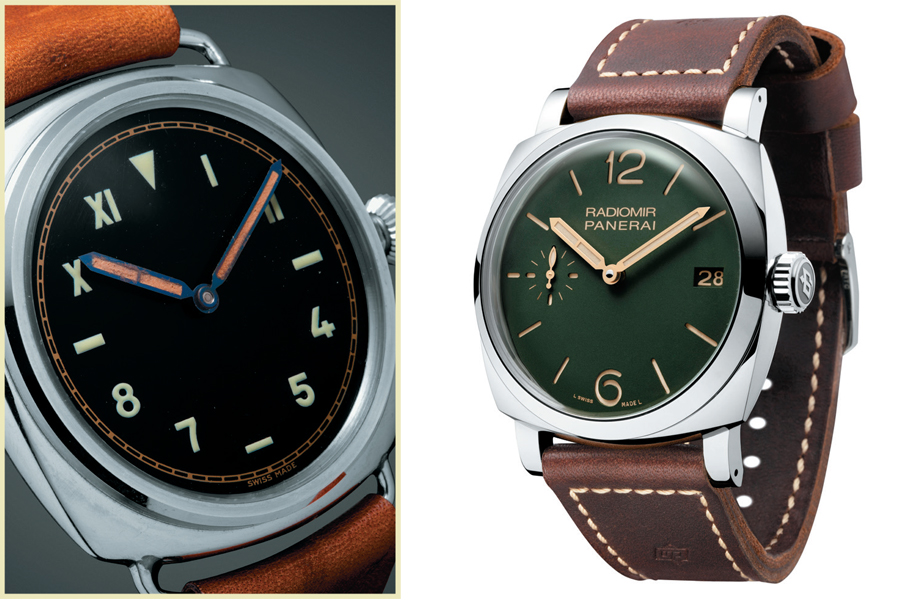 Officine Panerai Radiomir 1940 3 Days Acciaio
The 2017 rendition of the Radiomir 1940 is a modern variant of the iconic watch from Officine Panerai with a unique green dial. The Italian watchmaker historically supplied the Italian navy and specialist diving corps with precision instruments, which had the radium-based powder, Radiomir, that made the dials of sighting instruments and watches luminous.

This watch is elegant and the lugs are integrated with the case, which is made from a solid block of stainless steel as done in 1940, when the navy’s new norms required divers to remain underwater for longer and their watches had to be more resistant to tension.

Radiomir 1940 has become one of Officine Panerai’s most popular collections. Variations to the original have come in 1956, 1993, 2012 and 2016. As with the original (left), the indicators on the green dial are luminous and have conspicuous large markings. The diameter of this watch is 47 mm, a tribute to the original Panerai. The watch comes with a three-day power reserve and is water resistant to a depth of 100 meters. 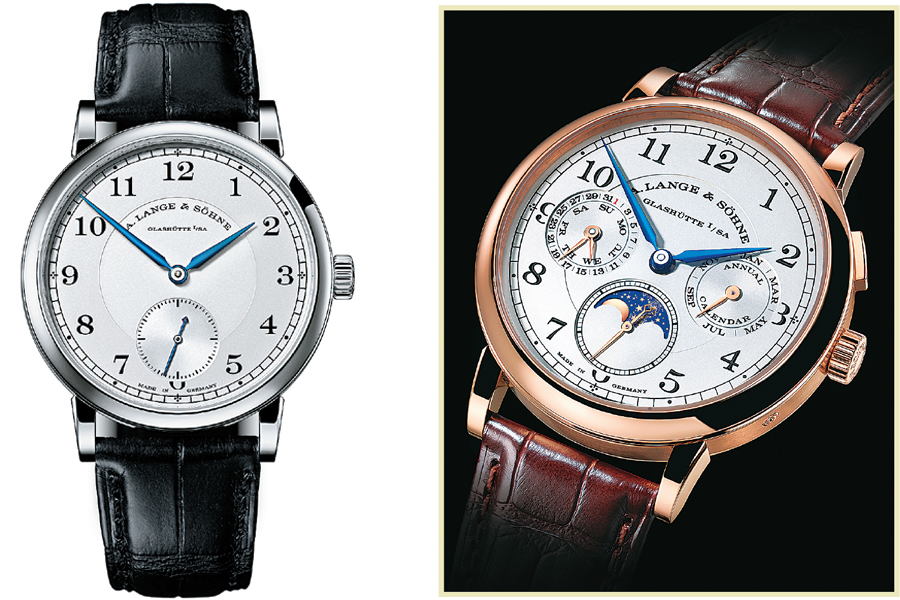 A Lange & Söhne 1815 Annual Calendar
This was one of the watches featured at the SIHH 2017, a conclave of watchmakers in Geneva. 1815 stands for the birth year of Ferdinand Adolph Lange, who established Germany’s precision watchmaking industry in Glashütte. The 1815 is possibly the most important, and one of the longest running, product lines in Lange’s watchmaking history, evoking memories of the first products—pocket watches that Lange started to manufacture in 1845.

The 1815 series is inspired by Lange’s earliest watches that had Arabic numerals on the dial, and the minutes scale resembled a railway track with blue steel hands. But this line has also introduced several innovations—the chronograph, tourbillon, the Rattrapante Perpetual Calendar, Tourbograph Perpetual—over the past 22 years.

The new model (top left) has an annual calendar and is capable of independently adjusting for months with 30 or 31 days. It also features a manually wound movement and an analogue date, which is in line with the classic design of the 1815 watch family. And, for the first time, the moon-phase display is combined with a day-or-night indicator, through the varying blue hues and star-filled or star-less background. 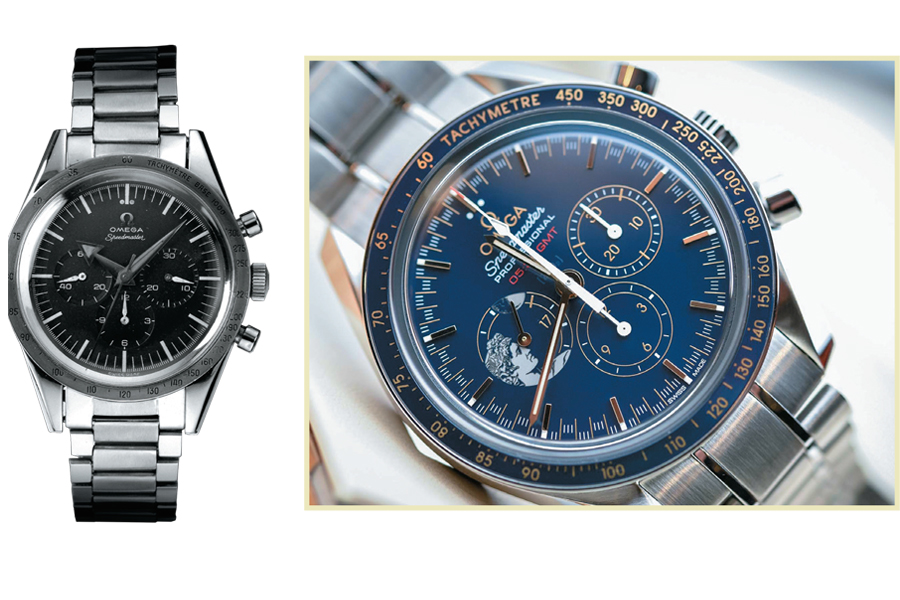 Omega Speedmaster Moonwatch “Apollo XVII”
This watch was unveiled at the Baselworld Watch and Jewellery Show this year to mark the 45th anniversary of the last manned lunar landing— the Apollo 17 in 1972—and to one of the astronauts on board, Eugene ‘Gene’ Cernan.

The Omega Speedmaster was originally a chronological watch launched in 1957 to complement Omega’s position as the official timekeeper for the Olympic Games. It was also the watch which Edwin ‘Buzz’ Aldrin wore when he landed on the moon in 1969, earning it the moniker Moonwatch.

In the new format (left), this 42 mm diameter watch is limited to 72 pieces, with the case crafted from lightweight grade 2 titanium (inspired by titanium ore, which is abundant on the moon).

‘45th Anniversary’ is engraved on the caseback with ‘05:34 GMT’ printed in red indicating the time of the final step made on the moon. The 9 o’clock subdial is distinguished by a gold representation of Greek god Apollo, the moon and the number 17. 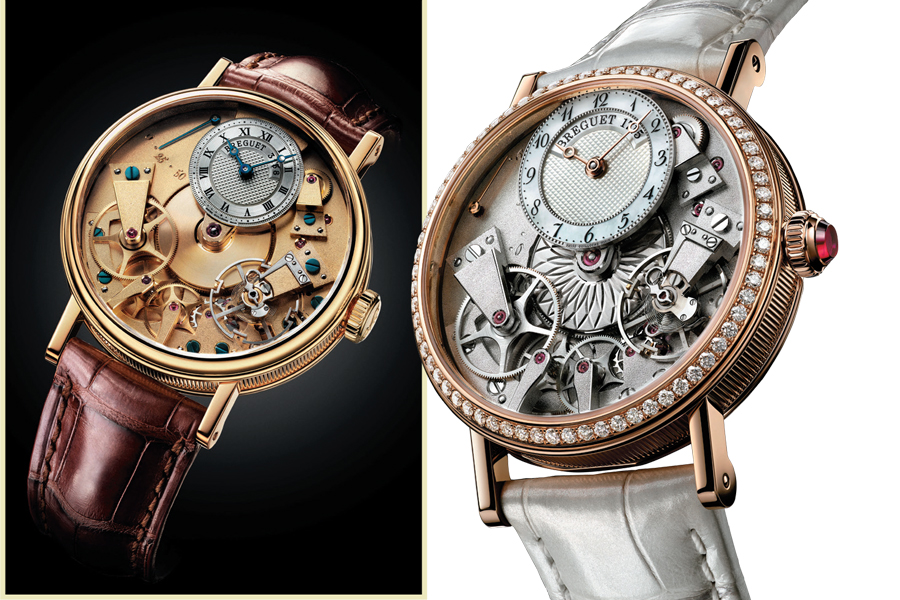 Breguet Tradition Dame 7038
The Tradition collection pays tribute to the memory of the Swiss watchmaker Abraham-Louis Breguet but, for the first time, in the form of a ladies’ watch.

The Tradition line, launched in 2005, is one of the most recognisable lines from Breguet, traditionally known for its men’s watches. So, though a largely modern product line, the movements of the Tradition collection are inspired by the legendary souscription (or ‘on subscription’ watches) created by Breguet in 1796. ‘On subscription’ watches were a type of travel clock, with a large dial and a single hand. These watches were called ‘on subscription’ as customers could reserve them for a down-payment. Thus Tradition timepieces suggest both a return to the brand’s origins and a vision of its future.

This watch was introduced a few months prior to Baselworld 2017 and is being marketed as Breguet’s flagship brand of 2017. The watch combines both established and avant-garde type styling; the dial face of these watches provide for horological complications aesthetically. The face of the Tradition Dame 7038 is highly technical and hand engraved with a rosette-motif that is overlapped by a small off-centre dial in white mother-of-pearl. Unique to this watch is that the movement can be seen from front (through the crystal) and the back (caseback). The watch comes in an 18k rose gold 37mm round case while the bezel is set with 68 brilliant-cut diamonds, which adds sparkle.

Longines Lindbergh Hour Angle  Watch 90th Anniversary
This is another watch with enough history and legacy, marking the 90th anniversary (left) of the first non-stop, transatlantic flight by American aviator Charles Lindbergh. The flight was timed by Swiss watchmaker Longines in May 1927. The story goes that, after the flight, Lindbergh had designed and sketched a watch as an aerial navigation instrument and he approached Longines to make it. This led to the Hour Angle Watch in 1931, which became one of the watchmaker’s most iconic and well-known timepieces.

The rotating-bezel design allowed pilots and navigators to calculate their longitude during long-distance flights. Longines reintroduced the Hour Angle Watch to its heritage collection a few years ago. The most modern version of the watch comes in a titanium case and 47 mm diameter. It bears a silver dial where the numerals read from 15 to 180 degrees, showing an interval of 15 for every hour. 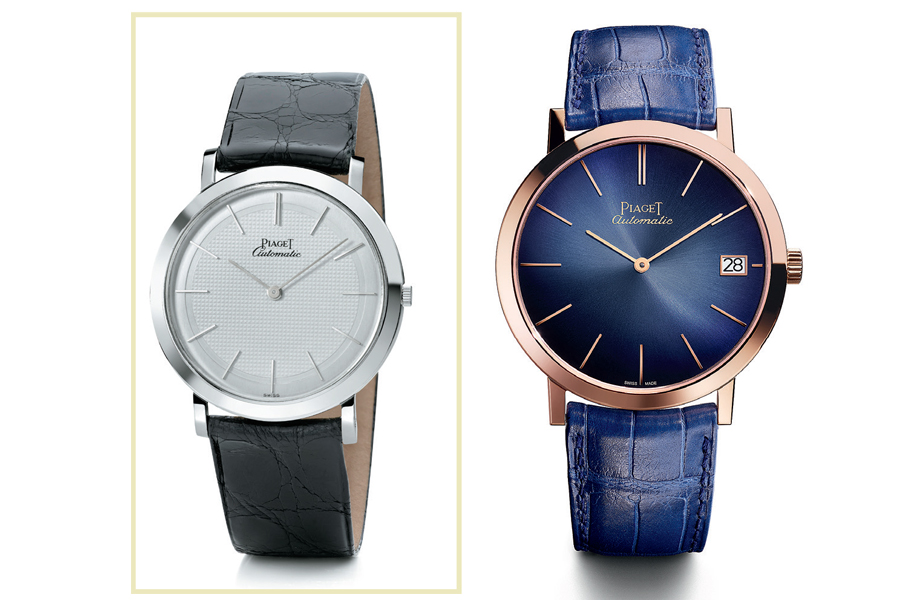 Piaget Altiplano 60th Anniversary
For the past 60 years, Piaget has been a specialist in making ultra-thin watches. It made them popular at a time when other watchmaking companies preferred not to venture into that segment. Now, in 2017, Piaget comes back with what it knows best (below). It launched two limited edition watches—in several variants—ahead of SIHH 2017, with unique technical expertise.

A 34 mm model, mainly for women, comes with a thin manual wound calibre (or movement) 430P—an evolution from the original 9P, which was introduced by Piaget in 1957. The mechanism, at the time, was just 2mm thin and made Piaget the pioneer in the field of ultra-thin watches. In 1960, came the 12P, the thinnest self-winding movement (2.3 mm), to be followed by the 600P, the world’s thinnest hand-wound shaped tourbillon movement (3.5 mm) in 2007 and the 1208P, also the thinnest self-winding movement, introduced in 2010.

Despite the ever-improving technicalities of its watches, some of the traditional features of the original 1957 watches continue to be retained even in the modern versions. These include a thin case and dial with simple baton (stick) markers instead of numericals and hands. But, as with all modern watches, it is more water resistant (up to a depth of 30 metres).

Tweets by @forbes_india
Amar Abrol: Firmly in the cockpit
The IoT gets a new look, with a cognitive makeover