AirAsia: The Tony and Mittu Show 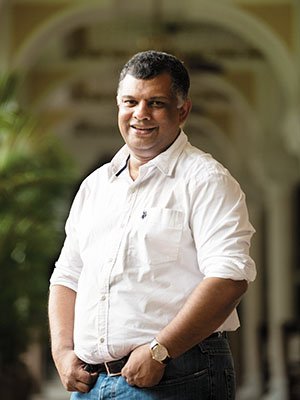 Image: Vikas Khot
Tony Fernandes, AirAsia founder, says the number of flyers in India can be huge if the pricing is right

Tony Fernandes and Mittu Chandilya are as different as chalk and cheese. Gregarious, irreverent Fernandes, who’s promised to paint the Indian skies in the red hues of his AirAsia airline once he gets a permit to fly domestic routes later this year, is a journalist’s delight, full of quotable and don’t-quote-me lines. His quiet and earnest CEO, Mittu Chandilya is the one who’s supposed to deliver the results Tony is seeking.

Ranked 21st on the Forbes list of richest Malaysians, Fernandes has built his fortune by being the David who took on Malaysian Airlines and the Government of Malaysia. The AirAsia group now has subsidiaries in five countries, apart from its long-haul joint venture AirAsiaX. Each company is headed by a CEO, moulded in what has, over the years, become the classic tee-shirt-baseball-cap-wearing LCC (low-cost carrier) style. Fernandes says his model is people-oriented and the CEO is the face of the airline.

But Chandilya is something else. Confident, but quiet, the 32-year-old former model is more measured in his tone and tenor. He is now neck-deep in preparations for AirAsia’s India launch—hiring people, meeting ministers and negotiating with suppliers. He says he will do it all, but will not wear the baseball cap.

We met Fernandes and Chandilya for a poolside discussion on what they were up to, and got a good whiff of what they are cooking up. Here’s what they said.

Mittu Chandilya, and his role at AirAsia India
Chandilya: My vision for India is to connect everyone. I gave Tony a commitment before he hired me that we will be bigger than the rest of AirAsia combined. With 400-plus aircraft, the fleet size of all the airlines in India put together is roughly the same as the AirAsia group’s. The market here is huge. So just give me a few years and we will be bigger.

Though it may seem like Tony is larger than life, his CEOs run the show. I haven’t been told how many people to hire, what routes to fly. All those are my decisions. I look at Tony like my uncle, who comes knocking me on my head if things do not move.

In time, he [Mittu] will form his own identity. I wasn’t like this 11 years ago. I interviewed Mittu only for 10 minutes and knew he was the guy. We want loyal, passionate people. He is very passionate about what he does—especially his hair. AirAsia is what it is because of all our people, not because of two-three guys at the top. I know everyone in the airline. You got to like people. We are aggressive in AirAsia, but it’s people-oriented marketing.

Being profitable in India
Chandilya: AirAsia is not a typical Indian company; there is no hierarchy. We make decisions very fast, we move very fast. If I meet a state chief minister one day, I can get him a proposal by the end of the day. We are not a company that does a tonne of analysis again and again before making a decision. It’s based on relationships and trust here. This is why we can be dynamic at pricing—which a lot of airlines may not be able to do. In India, there is a strong correlation between fares of different airlines. We will not be like that.

I have been spending time in KL [Kuala Lumpur] and with the other [AirAsia] subsidiaries, getting to know the business. The airlines in the group, all share the same brand and many of the processes. But each has to cater to its own market. The strategy is unique, depending on what is needed. For example, distribution is very different in Indonesia compared to Thailand.

Fernandes: The falling number of domestic Indian flyers shows that airlines haven’t got it right. There are thousands of people in Dubai who want to come down more often. The numbers could be huge if the price is right. The pricing has to be about two-and-a-half times that of a premium bus fare for the same distance. A bus would take eight to 12 hours between some distances; a flight can cut this.

Thailand took us six years to figure out, but we’ve got smarter. We have deep enough pockets. We are among the most profitable airlines in the world. We are well capitalised. 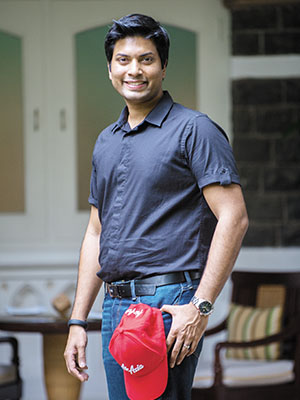 Mittu Chandilya, CEO, AirAsia India. Fernandes says about him, “He is very passionate about what he does—especially his hair
AirAsia is different
Chandilya: Our pilots fly and check their own planes. Our flight crew do everything: Prepare for deplaning, boarding, cleaning, having services ready, inflight sales; all this while looking smart. Everyone should leave impressed. I have three people for taking bags off the aircraft. For the Air India flight we took here, there were 15.

I don’t see AirAsia as only an aviation company. It’s in the details. For example, the amount of work put in over 11 years to understand fuel burn is amazing. Finding fuel burn rates, what winds to avoid, cruise time, time spent on taxi-ing—everything is calculated and institutionalised. There’s a discipline about it, but also a huge amount of entrepreneurialism in the team.

Our office in Chennai is very different. We have a flat structure. None of us has doors. My office does not even have a partition.

Fernandes: If you look at a Jet Airways girl or a Singapore Airlines girl—they all look the same. They all have a bun in their hair, similar lipstick, nail polish, and the same plastic smile. The smiles are manufactured in some factory somewhere. We don’t want this. So we asked the girls [in AirAsia] to dress any way they want—wear their hair however, but to be true. I want you to be yourself.

Other airlines
Chandilya: I have in the past consulted for Scoot, Jetstar and Singapore Airlines. I worked for a startup and turned around a business in China before my head-hunting stint. Our culture is very different.

Fernandes: I don’t admire too many premium carriers, but Emirates is fantastic. They’ve built an airline out of sand. That airline has created a country. They fly everywhere. Emirates is on everything—from football jerseys to everything. They are a great brand, and are doing so well. Other airlines are jealous of them. They say they get free oil, but that’s nonsense.

Everyone says Singapore Airlines did well. But that’s because all the others were idiots. Now Singapore Airlines is struggling. They are like confused puppies. They are doing low-cost and full fare. They were the kings. Now, when others wake up, they don’t know what to do. The LCC has routes that don’t work for them. Unless they are a truly independent brand, they can’t do much.

Preparing to launch
Chandilya: We are preparing, so we can be ready to go when we receive the clearances. When we put out the first ad for cabin crew, 5,000 people showed up. We ended up choosing only 15.

During our hiring, the main criterion was the smile. A warm, true smile is what we want from our people. We want fun and friendly people. It’s about finding those who really enjoy flying. We have 25 people ready, and a second batch is starting training soon. We are not hiring a ground handling agency, but will hire equipment from the airports.

One reason for choosing Chennai [as a base] is that we have a good understanding of what we can do for them [the airport]. My vision is to really work with them, to see the airport develop. They are doing 40 movements an hour, we could change that significantly.

Fernandes: Mittu’s benchmark will be replicating what we’ve done in Malaysia, Thailand and elsewhere. India has inherent disadvantages because of ATF [aviation fuel], but some advantages, like high fares. India has some good airlines. Airports, fuel have got to change. We have made that change [in policies] in other countries. No reason we can’t do it here.

I am hoping to change the industry here. We have to change.

Tweets by @forbesindia
Happy to Recommend Owning India: Morgan Stanley's Jonathan Garner
Why Abe-Nomics May not Work for Japan