Bhavarlal Jain was looking for a way to sell his irrigation systems, but enroute, he found a way to profit from trading in onions 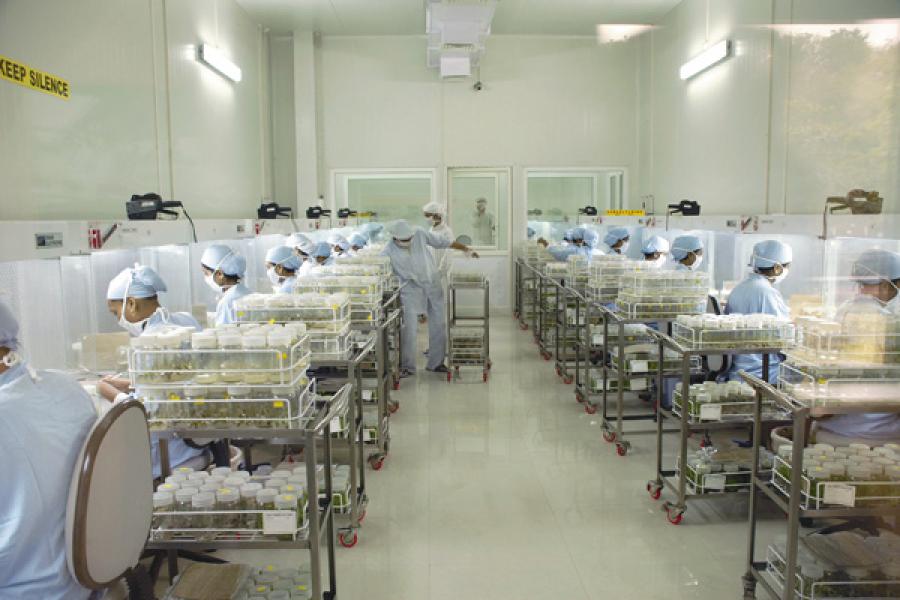 It could be said that Bhavarlal H. Jain tried to dig a canal and found a new stream. Seven years ago, the founder of Jain Irrigation Systems Ltd. (JISL), wanted to sell his drip irrigation systems to onion farmers in Jalgaon district.

Sensible move, because Jalgaon is the second largest producer of onions in Maharashtra, after Nashik. His irrigation systems could boost production. But soon Jain found himself earning sizable revenue from trade of agricultural produce.

Selling an Idea
Initially, the farmers were not willing to bite. They were growing red onions, which go through a lot of price volatility. Since the final sale price is uncertain, farmers weren’t confident about investing in an expensive irrigation system. Solution? Jain decided that he needed to gain the confidence of his customers, the better to market his irrigation systems.

To this end, he got involved with new farming methods, and introduced equipment like dehydration machines. These machines divest the vegetables of water and make them easier to store and export. Jain then took the big leap of faith. He offered to buy the crop from the farmers at pre-negotiated prices. For starters, Jain got into verbal contracts with farmers to buy their produce. Since the Jains have been associated with agricultural markets for decades, first as a farming family and now as suppliers of micro-irrigation systems, they had enough goodwill among farmers to enter into ‘contracts’ merely on the spoken word.

A guaranteed buyer particularly benefits small farmers. They do not have the financial strength or storage facilities to stock up their produce till prices firm up. In the case of onions, prices can be as high as Rs. 7 a kg or as low as 50 paise depending on whether it is lean times or harvesting season.

Jain also took care of another fear of the farmer — that of being locked into a price in case open market prices of onion soared. The company buys back the crop from farmers at a minimum guaranteed price, or the market price (if it is higher at the time of harvesting the crop) less 5 percent. “We looked at it from a very practical point of view,” says Atul Jain, one of B.H. Jain’s four sons, and JISL chief marketing officer. “If we had not made that offer, it would have persuaded many farmers to sell part of their produce in the market instead of selling it directly to us. It would have strained our relationship, and that is the last thing we wanted.”

Most of the farmers that Jain does business with are those with small land-holdings. These farmers have holdings of less than 5 acres. The company works only with 15 such small farmers in each village. By focusing on small farmers, Jain endears himself to the most vulnerable of farmers. Jain decided to avoid the volatile domestic market and focus on exports — which meant producing white onions. The market for white onions is extremely lucrative in Europe and the US. These onions have a higher solid content than the red onions that are conventionally produced in India. They are also much more pungent. To ensure that these onions grew well in India, Jain invested in a modern tissue culture laboratory. Today, almost all his onions go to Unilever worldwide, with a bit of it going to places in South America and Australia as well.

Over the past three years, he has succeeded in developing white onion varieties that are very close to the US variety. “Even then, the onions we grow through our farmers have a lower solid content of 14-15 percent compared to 20-25 percent for the US varieties,” says Anil Jain, managing director JISL (also a son of B.H. Jain). “But now we have developed new varieties in our labs which will help us improve the solid content to 20 percent, and these should be out in the market in two or three years.”

Other Avenues
In the last three years alone, volumes of dehydrated onions and vegetables (almost all of it being onions) sold have soared from 8,803 tonnes in 2007-2008 to 12,829 tonnes in 2009-2010. Value from sales too has climbed from Rs. 81 crore to Rs. 134 crore. Now Jain is thinking of upping the ante by using the same tactic for another agricultural produce: Mango.

“For us the encouragement of farmers to grow onions was one more step towards becoming more relevant to the farming community. It is this that has made us look at mangoes too. Business interests aside, what matters is the prosperity of the grower,” says Bhavarlal H. Jain, chairman of the group. Jain is already India’s largest producer of mango pulp (some say that he is already the world’s largest). Almost 50 percent of this is sold to Coca Cola. And he is aware that the processed fruit and vegetable market is several times larger than the market for dehydrated fruit and vegetables. 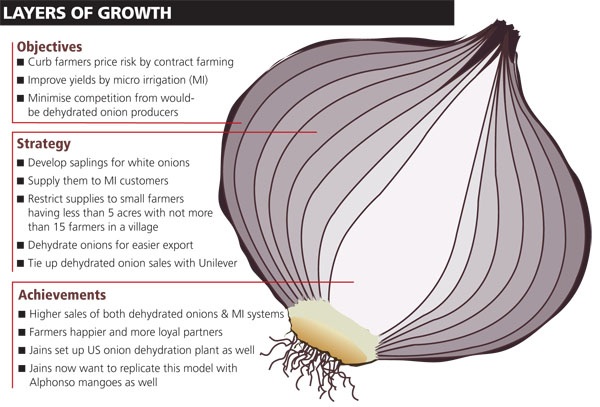 But instead of buying mangoes for pulp as he has done so far, he is now getting into ‘new-age’ farming of mangoes as well. The combined revenue of the company is Rs. 2,200 crore. This comes from three streams of business, the irrigation systems, the dehydrated vegetables business, and the mango pulp business. Jain expects the dehydrated vegetables business to grow by 15 percent, and the mango business to grow by 30 percent.

Experiments in high-density mango farming are underway in a few farms in Jalgaon and South India which allow him to pack as many as 600 trees an acre instead of just the conventional 40 trees an acre. If Jain gets it right, the revenues could be significant. The mango pulp business is larger than the dehydrated onions market for the Jains. Over the past three years, this business has grown from 39,021 tonnes in 2007-2008 to 56,483 tonnes in 2009-2010. In value terms, it has almost doubled from Rs. 160 crore to Rs. 269 crore during this period. The business is extremely important for JISL also because Coca Cola wants to increase its sourcing from India, and has agreed to invest, along with JISL, around Rs.100 crore in developing mango nurseries.

“I know that I am changing agricultural practices that are 100 years old. This requires educating farmers, and hand-holding them,” says Anil Jain. But in spite of these challenges, he expects to commence promoting such mango orchards on a massive scale in two to three years’ time.

Tweets by @forbesindia
Rupa - The Paper Tiger
What Does Your Neighbour Earn?