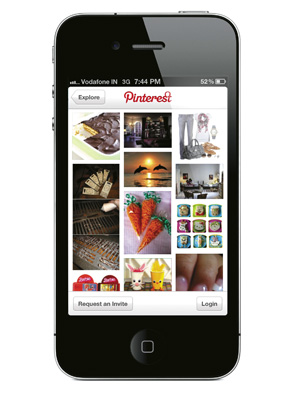 2. Facebook killer?
It had 11 million users as on January, and is booming. As we write this, it has an Alexa traffic ranking of 63. What makes it more interesting is that it cracks the early-adopter stereotype in that a majority of users are female: Over 80 percent of its users in the US are female.

3. What explains its success?
You never know when it comes to social media. Maybe people just like photographs? In eBay, products with images command a better price; in Facebook, images get more likes and comments. It certainly has something to do with the service making it easy to pin images and easier to browse—ideal for these attention-deficit times.

4. Why is it a big hit among women?
The site itself doesn’t say that it’s targeting women. Some say it’s the pink logo. Others that it’s because it facilitates shopping. We skirt politically incorrect territory if we try to answer that. If you figure it out, let us know?

But the really big noise has been about copyright. Pinterest advises its users not to pin too much of their own work. Since this leaves only the rest of the world’s photos to pin, its critics say it encourages stealing of intellectual property. The site saves a relatively high-resolution copy of the photo, unlike, say, search engines, or Facebook.