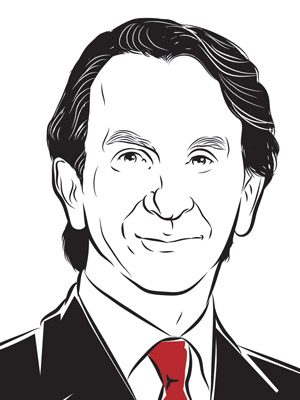 Alan Auerbach JUST hit the jackpot. Puma Biotechnology’s stock skyrocketed 295 percent on July 23 following good news from a Phase III clinical trial of an experimental breast cancer drug that Puma licensed from Pfizer. In a trial of 2,821 women with early-stage HER2-positive breast cancer, the drug, Neratinib, improved disease-free survival by 33 percent compared to a placebo. Puma intends to apply for regulatory approval in the first half of 2015. “We are looking forward to getting this drug to patients,” says Auerbach, Puma’s CEO.

Auerbach, 44, has another reason to be happy: The astounding stock jump made him an overnight billionaire. Auerbach founded Puma in 2010 and owns nearly 20 percent of the firm, including 2.1 million warrants and 230,000 exercisable options. At the July 23 closing price of $233, Auerbach’s stake was worth over $1.3 billion. Then the stock fell 14 percent over two days, closing at $200.68. Prior to Puma, Auerbach founded Cougar Biotechnology, which was bought by Johnson & Johnson in 2009 for $1 billion. He started his career as a research analyst at Wells Fargo, covering biotech firms. Auerbach received a BS in biomedical engineering from Boston University and an MS from the University of Southern California. Puma Biotechnology is headquartered in Los Angeles.