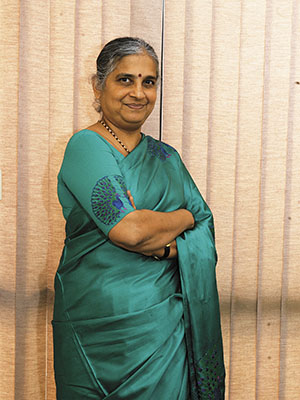 Sudha Murty, best-selling author and chairperson of the Infosys Foundation

In early may, market regulator Sebi granted an in-principle nod to Sankhya Women Impact Funds, the world’s first for-women fund. Founders Reena Mithal, an investment banker, and Shloka Nath, a former journalist (who has worked with Forbes India), are now going about raising money for the first close of their first fund, targeting Rs 10 crore.

In the next couple of months, the duo hopes to achieve their first close.

The fund, which plans to raise money only from women retail investors and invest in women’s development, was started by Mithal. “I decided that the best way for me to bring the two fields together would be to actually go out there and ‘get my hands dirty’,” says Mithal, who founded Sankhya Partners in July 2012 to invest in and work with social enterprises. Nath joined in June 2014.

Why focus on women? Aside from the accepted wisdom—that investment in women is potentially safe—the founders believe that women need a “seat at the table because the problems of poverty are so gendered”.

Over the last year, Mithal and Nath have built up a roster of anchor investors that includes Sudha Murty, best-selling author and chair of the Infosys Foundation; Anu Aga and Meher Pudumjee of Thermax and Zia Mody, a corporate law luminary.

We asked Anu Aga what prompted her to invest in Sankhya’s first fund. “The idea of helping women entrepreneurs was novel and good and since their credibility was established, we decided to support them.” Sudha Murty responded to an emailed question: “I liked Sankhya’s sincerity, honesty and the organisation’s approach. So I decided to invest and become a member of their advisory board.”

Tweets by @forbes_india
India's tally rises in Forbes Asia's Best Under a Billion list
Having a CMO in the management makes a huge difference: Hyatt's chief marketing officer