A presentation of obituaries and death notices from newspapers around the country tries to frame incalculable loss, collated with heartwarming, succinct obituaries for each. Here's how The New York Times put it together 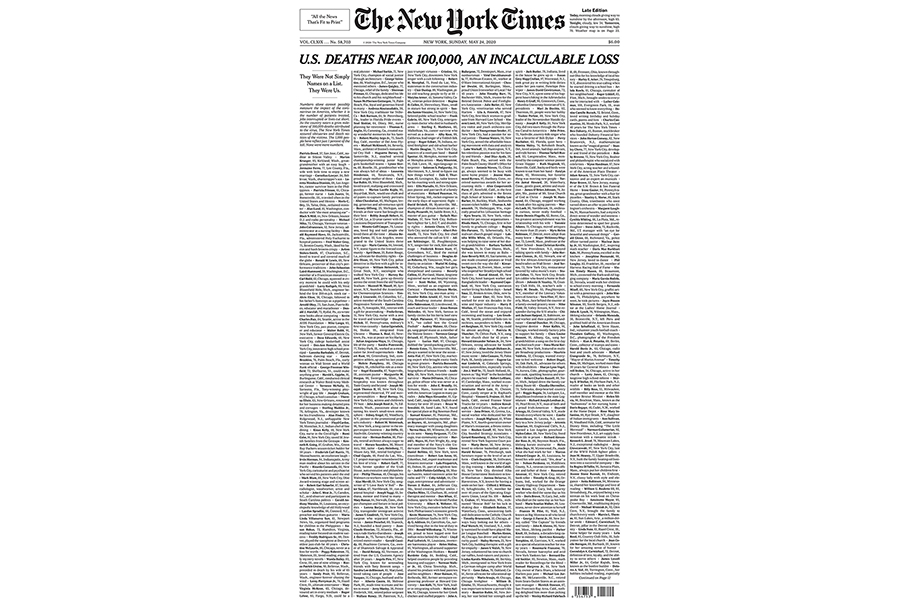 The front page of the May 24, 2020 Late Edition of The New York Times. (The New York Times) (Times Insider) Instead of the articles, photographs or graphics that normally appear on the front page of The New York Times, on Sunday, there is just a list: a long, solemn list of people whose lives were lost to the coronavirus pandemic. As the death toll from COVID-19 in the United States approaches 100,000, a number expected to be reached in the coming days, editors at the Times have been planning how to mark the grim milestone. Simone Landon, assistant editor of the Graphics desk, wanted to represent the number in a way that conveyed both the vastness and the variety of lives lost. Departments across the Times have been robustly covering the coronavirus pandemic for months. But Landon and her colleagues realized that “both among ourselves and perhaps in the general reading public, there’s a little bit of a fatigue with the data.” “We knew we were approaching this milestone,” she added. “We knew that there should be some way to try to reckon with that number.” Putting 100,000 dots or stick figures on a page “doesn’t really tell you very much about who these people were, the lives that they lived, what it means for us as a country,” Landon said. So, she came up with the idea of compiling obituaries and death notices of COVID-19 victims from newspapers large and small across the country, and culling vivid passages from them. Alain Delaquérière, a researcher, combed through various sources online for obituaries and death notices with COVID-19 written as the cause of death. He compiled a list of nearly a thousand names from hundreds of newspapers. A team of editors from across the newsroom, in addition to three graduate student journalists, read them and gleaned phrases that depicted the uniqueness of each life lost: “Alan Lund, 81, Washington, conductor with ‘the most amazing ear’ … ” “Theresa Elloie, 63, New Orleans, renowned for her business making detailed pins and corsages … ” “Florencio Almazo Morán, 65, New York City, one-man army … ” “Coby Adolph, 44, Chicago, entrepreneur and adventurer … ” Landon compared the result to a “rich tapestry” that she could not have woven by herself. Clinton Cargill, assistant editor on the National desk, was Landon’s “editing co-pilot,” she said. Other key players in the project were Matt Ruby, deputy editor of Digital News Design; Annie Daniel, a software engineer; and the graphics editors Jonathan Huang, Richard Harris and Lazaro Gamio. Andrew Sondern, an art director, is behind the print design. Marc Lacey, National editor, had warned Tom Bodkin, chief creative officer of The Times, that the milestone was coming. “I wanted something that people would look back on in 100 years to understand the toll of what we’re living through,” Lacey said in an email. 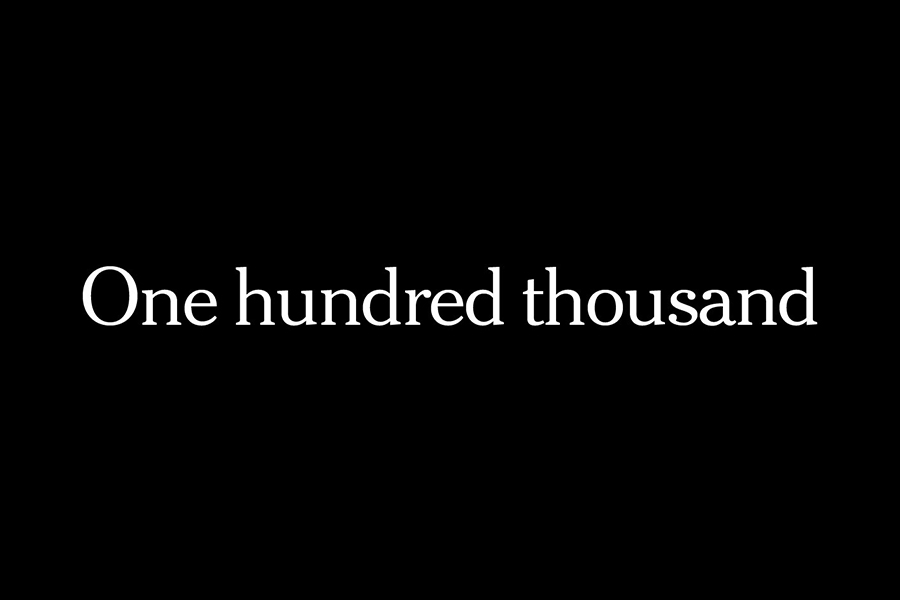 “I wanted something that people would look back on in 100 years to understand the toll of what we’re living through,” Marc Lacey, the New York Times' National editor, said. (The New York Times) For the front page of the paper, two ideas stood out: either a grid of hundreds of pictures of those who had lost their lives to COVID-19, or an “all type” concept, Bodkin said. Whichever approach was chosen, he said, “we wanted to take over the entire page.” The all-type concept came to the fore. Such a treatment “would be hugely dramatic,” he said. The design references that of centuries-old newspapers, which Bodkin is keenly interested in. For many years after The Times started publishing in 1851, there were no headlines, in the modern sense. “It was kind of running text with little subheads,” Bodkin said, describing newspapers in the mid-1800s. Bodkin said he did not remember any front pages without images during his 40 years at The Times, “though there have been some pages with only graphics,” he said, adding, “This is certainly a first in modern times.” Inside the paper, the list continues, threaded with an essay by Dan Barry, a Times reporter and columnist. But mostly there are names. More names, and more lives lost.

Tweets by @forbesindia
Restarting India: How Mumbai can get back on track
Crypto and Forex Ponzi scheme on the rise amid COVID-19