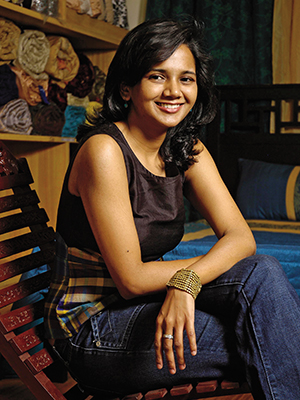 Lavanya Nalli is on a quest to make her family’s traditional fine-silks business the No 1 sari destination in the world. “If you think sari, you should think Nalli,” says the 31-year-old vice chairman of Nalli Group of Cos, which sells 1.5 million saris a year. “It should be the most trusted sari advisor.”

To this end, the fifth-generation scion—and the first woman executive—of the $100 million (annual revenue) group is looking to double store count and sales in the next four years.

With $18 million in cash for capacity expansions and upgrades, she plans to add outlets this year in tier-two cities such as Kochi, Puducherry, Jaipur and Chandigarh.

She also plans to rev up sales with a new ecommerce platform and team. And she’s introducing customer-relationship and business-intelligence systems to track buyers, understand their requirements and build loyalty programs.

For the 88-year-old family company, it’s a fresh approach. “I have run the business on experience and hunches,” says Ramanathan Nalli, 56, Lavanya’s father and vice chairman at the group. “Lavanya has brought in a system, rigour and discipline. She’s super-analytical.” Ramanathan has stepped back since November. “You can’t have heads from two generations running the business,” he says.

Lavanya’s younger brother, Niranth, is a third vice chairman and runs the new jewellery arm. Her grandfather Nalli Kuppuswami Chetti, 75, is chairman. He runs the 50,000-square-foot flagship store in Chennai, which he owns in partnership with Ramanathan, 75 percent-25 percent; the remaining 30 outlets across eight cities, including Delhi, Mumbai, Bengaluru and Ahmedabad, are jointly owned and run by Ramanathan, Lavanya and her brother.

Nalli, which has a reputation for bridal silks and sells a range of saris, priced from $2.20 to $3,100, also has a store in Singapore and one in Mountain View, California, catering to Indian expats.

Lavanya, based in Bengaluru, has her task cut out for her. While the $6 billion Indian sari market is growing, it is disorganised, fragmented and rife with regional competitors. In addition, “the sari market for every major city has a local player who is very successful and understands that micromarket really well,” says Arvind Singhal, managing director at management consultancy firm Technopak. “There are hundreds of very competent sari businesses, which will be tough to dislodge.”

Moreover, the sari as a category is facing competition from Western and other ethnic Indian clothes. But this is offset by a revival of sorts, with women willing to spend more on elaborate saris for festive occasions. Technopak projects a compound value growth rate of 6.5 percent for saris from 2015 to 2020, slightly slower than 7 percent in the previous five years.

Lavanya grew up with Nalli in the background. The company was established in 1928 by her great-great-grandfather, who hailed from the ‘Shaliyar’, or weaving, community in the southern state of Tamil Nadu. But her direct involvement with the company began only in 2004, when she was earning an engineering degree in computer science at Anna University in Chennai. She interned at the business, overseeing the rollout of inventory-management systems and software applications.

After completing her degree in 2005, she joined the company full-time, increasing its retail footprint from 14 to 21 stores in four years. She felt that Nalli was adept at selling to women who wore saris regularly but ignored the bored daughters who accompanied their mothers on shopping trips. “These daughters looked at Nalli as ‘my mum’s store’,” says Lavanya. “Their thinking was that ‘Nalli is old-fashioned. My mum wouldn’t wear a halter neck blouse with Swarovski crystals on it. But that’s what I want, and Nalli can’t offer it to me’. But we had those kinds of saris.”

To lure young customers, she created Nalli Next, which showcased a wider range of saris—from workwear to designer versions to evening and cocktail styles—and fancier materials, such as crepes and georgettes. She also expanded the ethnic-wear collection, with salwar suits and lehengas, or traditional skirts, although saris still account for 90 percent of Nalli revenue.

In 2009, Lavanya left for Harvard Business School. After obtaining an MBA, she became a senior associate at consulting firm McKinsey in Chicago. In 2014 she joined Myntra.com, India’s leading fashion portal, where she was vice president for revenue and shopping experience, before returning to the family business in November.

She’s hoping to use those insights to expand Nalli, but she’s also drawing on Nalli’s strengths: It has its own weaving centres, is connected with a network of artisan weavers across India and adds new stock every month, as opposed to every quarter or season as at most apparel retailers.

She believes Nalli is at the start of a whole new phase. “I am staring at a huge opportunity,” she says. “The hard part has been cracked—the quality, the sourcing, the talent and the operations. Now we are going for scale.”