Robbie and Jose Antonio are about to open a Trump Tower in Manila. Jose is also the Philippines'
new trade envoy to America. Coincidence? 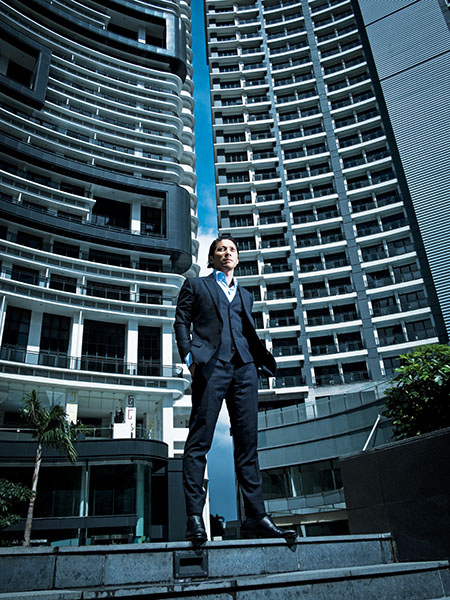 
Robbie Antonio winds his way through full-scale models of the apartments that he and his father, Jose, are selling in a new residential tower in Manila. The units, which start at $160,000, are accented by cool greys and blues, and like many other Antonio projects, they’re a co-branded affair, featuring minimalistic, Armani-designed interiors.

The Armani partnership is evocative of the Antonio business model. In the 31 years since Jose founded the $230 million-in-annual-sales Century Properties, the Philippine economy has blossomed, and they have responded to the growing demand for increasingly plush apartments and offices with the first condominiums in the Philippines, an ultraluxe Manila tower called Gramercy Residences and a man-made beach with a beach club designed by Paris Hilton. They often work in partnership with Western brands like Armani, Missoni and Versace—and, full disclosure, with Forbes Media. The Antonios broke ground last year on a Forbes-branded Manila office building. A few blocks away from Forbes Tower is a Trump-branded, Antonio-built residential tower. The $150 million, 57-storey tower is nearly ready to open. “Trump has been a very positive experience,” says Robbie. And most of that experience has revolved around the friendship he has forged with the Trump children Ivanka, Eric and Donald Jr.

The Antonio-Trump relationship has morphed in the last couple of months. Back on October 13, Filipino President Rodrigo Duterte named Jose as the Philippines’ special envoy for business and trade to the US. An Antonio spokesman says Jose’s role is a “non-governmental, non-policymaking” position. He says, Jose’s “priority is the enhancement of the Philippines’ and US’s business relations.” And who could better strengthen business relations between the Philippines and a Trump America than a Trump business partner?

(This story appears in the 28 April, 2017 issue of Forbes India. To visit our Archives, click here.)

Tweets by @forbesindia
In Trump they trust: The president's global web of business partners
Forbes India Selections: The best of our stories from 2016-17