A look at how Ritesh Agarwal, a Forbes India 30 Under 30 2016 alumnus, is carving a niche in the global hospitality market 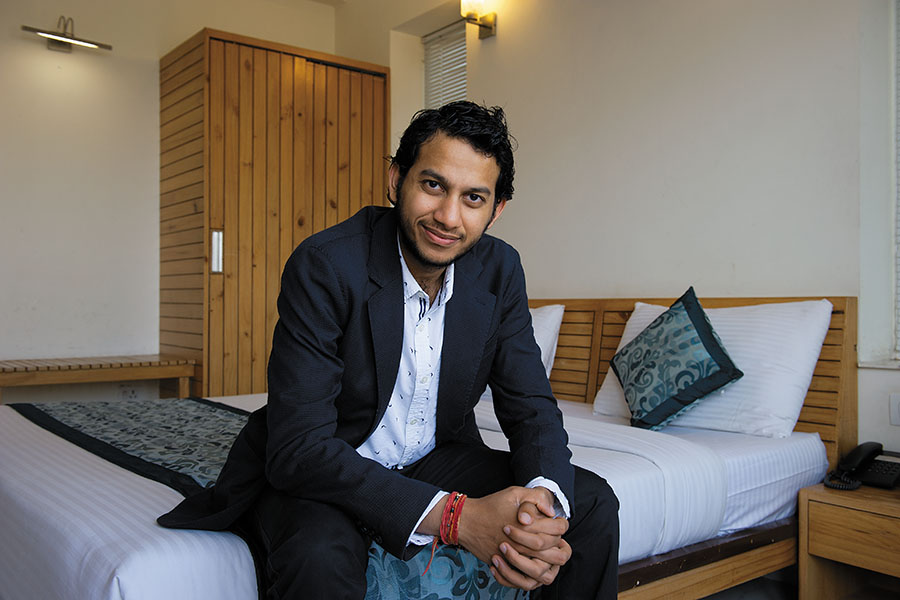 Founded by Agarwal in 2012 when he was 19, Oyo franchises and leases budget hotel rooms pooled from independent property owners. The company has amassed 515,000 rooms, making it the world’s eighth-largest hotel chain by rooms under management, according to hospitality research firm STR.

To finance further expansion, Oyo has raised over $1 billion in funding—first from Son’s SoftBank in September for $800 million, and then Singapore’s ride-hailing giant Grab in December for $100 million and China’s ride-hailing major Didi Chuxing in February for $100 million. Last month, Airbnb also took a stake in Oyo for an undisclosed amount. This staggered round valued the Gurugram-based company at $5 billion, allowing Oyo to plan an expansion to tap Asia’s fast-growing tourism sector. Oyo will quintuple its rooms in the next four years to over 2 million—which would be more than the world’s largest hotel chain Marriott’s 1.3 million rooms. Oyo is tapping into a large and growing market, as the World Tourism Organization projects that tourist arrivals in Asia will grow by 66 percent to 535 million tourist arrivals by 2030, from 323 million in 2017.

Agarwal, who joined the 30 Under 30 list in 2016, came up with the idea for Oyo while staying in crummy hotels in New Delhi during his 11th and 12th grades. He’d moved to Rajasthan in 2010 to get coaching to enter the prestigious Indian Institute of Technology (IIT) and would travel to nearby Delhi over the weekends. While he didn’t get into IIT (he enrolled in a college in Delhi instead), the experience inspired him to create an affordable hotel brand that would be both clean and safe. He started Oravel Stays—which became Oyo in 2012. When his concept won him a $100,000 Thiel Fellowship for budding entrepreneurs in 2013, he dropped out of college to focus on building Oyo.

Today, Oyo’s franchise covers 18,000 properties in 500 cities around the world. Oyo has earmarked $950 million to bankroll a multipronged expansion across Asia over the next five years. Of that amount, about $600 million will be spent in China, the world’s fourth-largest tourist destination and where Oyo already has 270,000 rooms. The rest of the funds will be spent in Indonesia, India and the Philippines.

Oyo, which operates primarily in the no-frills segment with rooms averaging $25 a night, is also going upmarket with offerings like Palette Resorts (around $100 per night). It also launched weddingz.in in 2018 to help consumers find venues, caterers and events managers for wedding banquets across 15 cities in India. Its Oyo Home division, launched in 2017, offers short-term leases of homes and villas for property owners, while Oyo Life is expanding its long-term home rental business in Japan with partner Yahoo Japan.

To drive Oyo’s growth strategy, the company has beefed up senior leadership, roping in Aditya Ghosh from IndiGo Airlines as CEO for India and South Asia. In China, senior executives drawn from Google, Uber and Wanda manage the business. Oyo expects revenues to triple to $200 million from $65 million last year. “Its pace of growth is unparalleled, fuelled by the growing middle class in markets like India and China,” says Jesper Palmqvist, Singapore-based area director for Asia-Pacific at STR.

Despite such growth, Oyo will remain in the red. Last year it had losses of $55 million. Yet its investors are optimistic that Oyo will eventually turn a profit as it scales up. “There’s a huge opportunity in budget hotels around the world,” says Bejul Somaia, partner at Lightspeed India Partners, a New Delhi-based venture capital firm that’s one of Oyo’s early investors.

Once a new hotel signs up as an Oyo franchisee, a construction crew renovates it within 14 days using Oyo’s designs. Only then is Oyo’s distinctive red-and-white logo put up outside the hotel. Oyo claims to increase average occupancy from 25 percent to 65 percent within three months. With the rapid growth of Oyo, some hotel owners across India have been boycotting the company, alleging breaches in contract and price gouging. “We can’t afford to do business with Oyo,” says Gurbaxish Singh Kohli, vice president of the Federation of Hotel and Restaurant Associations of India, a trade group. It charged in a letter to Oyo in December that 40 percent of the rooms on Oyo’s network, some in residential buildings, were operating without proper licences.

Agarwal rejects the charge. “We are 100 percent compliant,” he says. “These are vested interests who have come up with unsubstantiated claims.” Oyo also has to contend with intensifying competition around the region from no-frills startups such as Home Inn, Han Ting Express and 7Days Inn in China; Fab Hotels and Treebo Hotels in India; RedDoorz and Zen Rooms in Indonesia and Go Hotels in Philippines.

“Oyo is underestimating the complexity in Southeast Asia because these are large complicated markets,” says Amit Saberwal, founder of four-year-old RedDoorz, which operates in Indonesia, Philippines, Vietnam and Singapore. “Oyo’s testosterone-driven, high-decibel approach will not work here. It has to fight the battle on the ground, city by city. These markets cannot be built sitting in a boardroom.”

Oyo, however, is led from the front by its globetrotting CEO Agarwal, who travels to five to 20 cities a month, staying in Oyo hotels along the way. He remains connected with property owners through hundreds of WhatsApp groups. His focus is clearly on carving a niche in what he estimates as a $1.2 trillion global hospitality market. “We want to become the most-loved hotel chain in the world,” he says.