The King Of Calculus: Turning online education on its head

Where are all the superstars in online education? A math teacher has become a global sensation 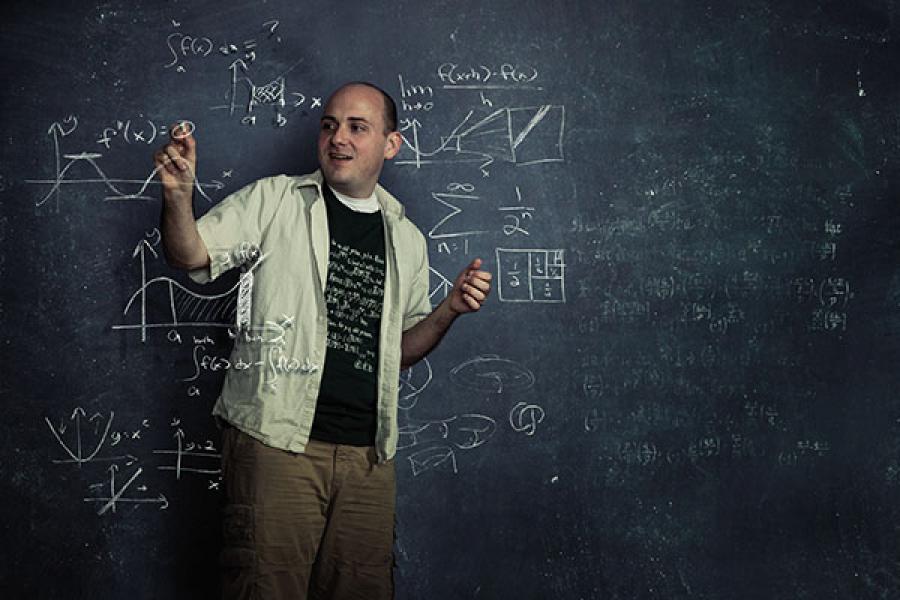 Two years ago, when the online education craze began, big-name professors started cranking out videos about hot topics such as cryptography or startup engineering. Left in the dust was the old-fashioned mathematics class that no one wanted to teach online: Calculus.

Then, Jim Fowler entered the picture. The 33-year-old assistant math professor at Ohio State has always been on a one-man crusade to make secants sexy and integrals irresistible. After videoing a batch of calculus lectures over December 2012, Fowler got the go-ahead a month later to roll out his course via Coursera, a leading provider of massive open online classes, or MOOCs. Against the odds, Fowler’s geeky, high-energy style has become a global crowd-pleaser. The man in the untucked plaid shirt doesn’t just write equations on a chalkboard, he also greets online students with a deep-voiced imitation of a Lord of the Rings character, declaring: “One does not simply walk into calculus!” Soon afterward, glowing images of curves and solids appear. Thanks to nifty video editing, these creations devour his desk and jump in front of his face. To help students sense the “wow” factor of some techniques, he slips in a kicky musical soundtrack as lecture ideas reach their culmination.

All that showmanship is just a prelude to what Fowler regards as the heart of his course: Highly nuanced problem sets that make the most of online learning’s feedback loops. Much like the Khan Academy’s Salman Khan, the champion of online math for grade schoolers and high school students, Fowler believes that practice makes one perfect. To guide students, Fowler built MOOCulus, a quiz programme full of customised hints and automatically generated extra problems in areas where individual students need help. “The lectures are important for motivating students,” Fowler explains. “But you don’t learn by watching math. You learn by doing math.”

Fowler’s ﬁrst six-week course, Calculus One, attracted 35,000 active enrollees. Since then, more than 110,000 additional students have started the 23-hour course, putting it in the top three percent of Coursera’s oﬀerings. Demand is so brisk that Coursera has moved its class to “continuous enrolment,” so that students don’t need to wait for a semester—or even a fortnight—for a new cycle of the course. No matter when students want to begin, the King of Calculus is holding court.

College students make up only 25 percent of Fowler’s enrolment. They are greatly outnumbered by older adults like Ria Frazier, a ﬂooring specialist and lift-truck trainer in New Jersey, who ﬁnished her formal education in the 1980s. She was a star math student in high school decades ago, and now that her children are in college, she is eager to reconnect with the world of ideas, mostly through MOOCs.

“I take online classes to keep my brain from melting,” Frazier says. She praises Fowler’s clarity and his ability to make each new lecture build on the previous one, so that “what seemed impossibly diﬃcult last week now made perfect sense. I had a lot of ‘oooh’ and ‘aha’ moments when he explained why formulas work,” she adds. “I was actually sad when the class ended.”

If Fowler comes across as the sort of guy who took calculus in eighth grade—and didn’t learn to drive until graduate school—that’s because his bio is packed with such out-of-sync moments. He grew up in Mankato, Minnesota, as the son of an accountant father and a homemaker mother. By sixth grade, he was so annoyed at the slow pace of everyday math that his parents began driving him to nearby college campuses for special programmes aimed at gifted children.

Fowler excelled in math as a Harvard undergraduate and headed to the University of Chicago for graduate studies. There, he tried his hand at teaching inner-city enrichment classes and helping update middle school curricula. “It was an eye-opener for me,” Fowler recalls. “I met students who didn’t know how to divide by two. In some of the classes, people would throw things at me.”

Fowler persevered, and eventually the paper balls stopped ﬂying at his head and the students started listening more. Fowler had found his calling. Even though his research interests kept pulling him into intricate areas of advanced topology, he couldn’t shake the desire to have an impact as a teacher. He took a post-doctorate teaching position at Ohio State in 2009.

Ever the number cruncher, Fowler calculates that about three percent of his online students drop out every day. High attrition is common in MOOCs, which attract casual internet surfers who sign up just to see what a class is like without any serious intention of ﬁnishing. Still, Fowler agonises over what he could do to help retention. Maybe the ﬁrst quiz was too hard. Perhaps, some students got frustrated by software bugs that have since been ﬁxed. All told, Fowler has put 1,350 hours into his online class, including lots of evenings visiting discussion boards and providing one-on-one tutoring for students who are stuck.

Most young professors at research universities would destroy their chances of winning tenure if they spent so much time on a class. But Fowler is in a luckier situation. Ohio State originally parked him in a non-tenure track, but once his online calculus class became a hit, university oﬃcials took a second look—and decided that Fowler ought to be on the tenure track after all. It looks as if an online breakthrough has put his career on an upward slope.

Tweets by @forbesindia
The Master Tactician: Honda's Keita Muramatsu is keen on racing ahead in India
The Wheel of Fortune: Yogesh Mahansaria's nurturing has taken Alliance Tire places