The oil-and-telecom tycoon added $15.3 billion to his wealth last year, according to Forbes's annual list of the country's richest billionaires 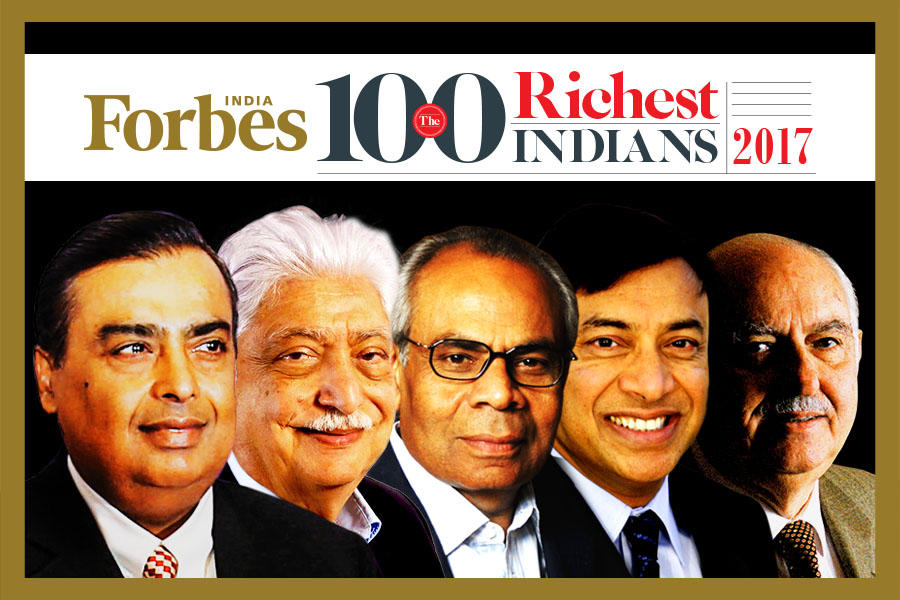 Reliance Industries Ltd (RIL) chairman Mukesh Ambani has topped Forbes’s annual list of India’s 100 richest tycoons with a net worth of $38 billion. Despite the country’s economic hiccups, the combined net worth of India’s 100 wealthiest stood at a whopping $479 billion, a rise of 26 percent from $374 billion in 2016.

Naazneen Karmali, India Editor of Forbes Asia, said: “Despite India's economic slowdown, the country's 100 richest have collectively enjoyed a bumper year thanks to a buoyant stock market. While the Indian billionaire factory continued to churn out new names from diverse sectors, the price of entry rose to a record high. The top 100 club is getting more exclusive with each passing year.”

Ambani, who retains his number one spot as the world’s richest Indian for the tenth consecutive year, saw his wealth increase by 67 percent from $22.7 billion last year, making him the biggest dollar gainer on the list and one of Asia’s top five richest. RIL’s share price has risen over the last year on the back of the company’s improved refining margins, and the telecom unit Reliance Jio’s massive success in notching up 130 million subscribers since its 2016 launch.

Ranked second on the list, tech tycoon Azim Premji is another big gainer jumping two places, with his net worth rising by $4 billion to $19 billion this year. The gain is partly due to increased revenue and profit at his privately held consumer-goods business Wipro Enterprises, which makes everything from soaps to lightbulbs. The Hinduja brothers (No. 3, $18.4 billion) added $3.2 billion to their net worth.

A dozen listees are poorer than a year ago, with half of them from the pharmaceutical sector, which has been plagued by challenges. Pharmaceutical magnate Dilip Shanghvi (No. 9, $12.1 billion) is the biggest dollar loser on the list as his net worth fell by $4.8 billion, ending his three-year run as India’s second-richest. The Gupta family (No. 40, $3.45 billion), heirs of patriarch Desh Bandhu Gupta, who died in June, saw their fortune shrink as shares of their generics maker Lupin declined.

Sourav Majumdar, Editor, Forbes India, said: “The aggregate wealth of the top 100 has risen 26% over last year, despite the struggle of some sectors like pharma. In fact, the entry point to the list is at its highest ever, at $1.46 billion, with several billionaires waiting in the wings. Clearly, India’s entrepreneurial energy is flourishing despite challenges.”

The 100 wealthiest on this year’s list are all billionaires. The minimum amount required to make the list was $1.25 billion last year, 17 percent lower than this year.

More than four-fifths of those who kept their spot on the list from last year saw their wealth rise, with 27 listees adding $1 billion or more to their net worths. Among them is Kumar Birla (No. 8, $12.6 billion) of Aditya Birla Group, who oversaw the merger between his telecom company Idea Cellular with Vodafone India. Auto parts tycoon Vivek Chaand Sehgal (No. 23, $5.85 billion), added $2.25 billion to his wealth after his Motherson Sumi Systems acquired Finnish truck-parts maker PKC Group for $620 million in March.

The richest newcomer is cookies-and-airline tycoon Nusli Wadia (No. 25, $5.6 billion). Among the five other new entrants to the list are Dinesh Nandwana (No. 88, $1.72 billion) of e-governance services firm Vakrangee; Vijay Shekhar Sharma (No. 99, $1.47 billion) of fast-rising mobile wallet Paytm; and Rana Kapoor (No. 100, $1.46 billion) of Yes Bank, India’s fifth-largest bank in the private sector.

Veteran investor Radhakishan Damani, boosted by the listing of his supermarket chain D-Mart in March, returned to the list at No. 12 with a net worth of $9.3 billion. Other returnees are Future Group’s Kishore Biyani (No. 55, $2.75 billion) and siblings Murli Dhar and Bimal Gyanchandani (No. 75, $1.96 billion).

This list was compiled using shareholding and financial information obtained from the families and individuals, stock exchanges, analysts and India’s regulatory agencies. The ranking lists family fortunes, including those shared among extended families such as the Godrej and Bajaj families. Public fortunes were calculated based on stock prices and exchange rates as of September 15. Private companies were valued based on similar companies that are publicly traded.

The list and its detailed analysis can also be found in the October issue of Forbes Asia and in the Forbes India issue, which will be available on newsstands from November 3, 2017.To view the full India's 100 Richest 2017 list, click here(Disclaimer: Reliance Industries Ltd is the owner of Network 18, publisher of Forbes India)