The Anatomy of a Tony Neighbourhood

The parameters of what draws the affluent Indian to a particular neighbourhood varies from city to city, but there is one clear commonality: The rich like to live alongside the rich 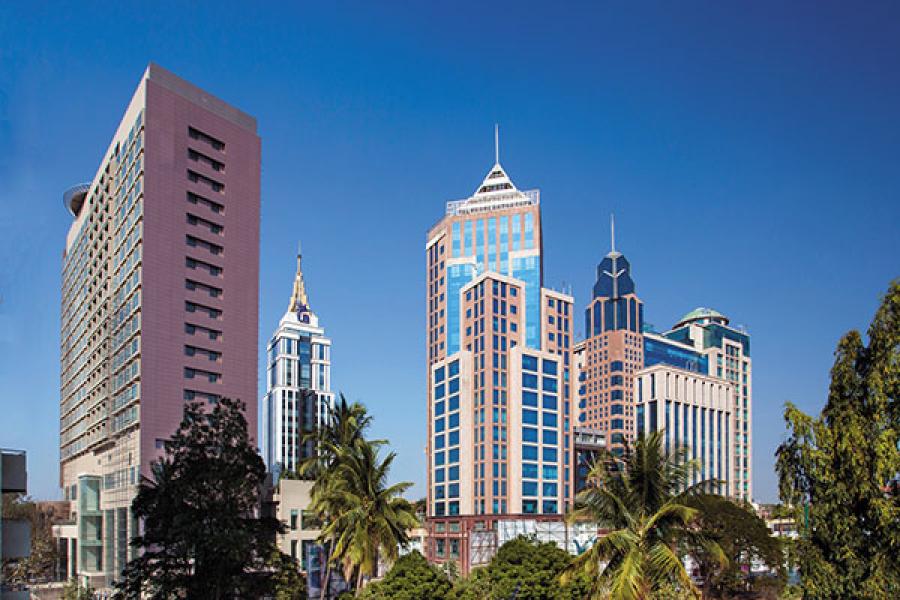 From his terraced penthouse, Anant Goenka watches the sun dip into the Arabian Sea. The 27-year-old head of New Media at the Indian Express Group lives on the 25th floor of Express Towers at Nariman Point, one of the most sought-after addresses in India. The penthouse is far removed from the noise and grime that defines Mumbai. The landmark building is flanked by Air India’s office towers and Oberoi Trident Hotel. “There is an element of peace [here], no crazy traffic or honking. I just love the ocean,” he says.

Goenka has lived in Nariman Point for most of his life. He works in the same building where his penthouse is located, and is one of the privileged handful who don’t spend time commuting to work. He has few neighbours, but they have one thing in common: Wealth.

The parameters of what draws the affluent Indian to a particular neighbourhood varies, and may include access to good schools and health care, ease of commute, vibrant nightlife, open spaces, planned neighbourhoods, gated communities, privacy and serenity. But the single unifying marker is socio-economic status. The rich like to live with the rich.

This trend has been reinforced even in newer cities such as Gurgaon and Noida, and in the gated communities of Bangalore and Pune, where luxury apartments and complexes are defined not only by square foot space, but also by their proximity to airports and highways. For developers the brief is simple: Provide the best amenities that money can buy and ensure ease of commute. “Luxury homes attract people of the same socio-economic background,” says Ashish Jerath, vice president (sales) of New Delhi-based Emaar MGF, one of India’s top real estate developers.

In Mumbai, the higher the better
A fair number of Mumbai’s tribe of wealthy people are clustered in the shady enclaves of Colaba, Malabar Hill, and Altamount Road, where India’s richest man Mukesh Ambani built Antilla. Nearly 50 of the richest Indians live within a 10-km radius of Altamount Road. These are bastions of old wealth that date back to the Raj.

The metaphorical gates of such neighbourhoods are zealously guarded by families that have been living there for generations. Community networks satisfy the six degrees of separation rule, which contends that everyone knows everyone through a separation of six people. And of course, demand outweighs supply. At Rs 91,000 or $1,500 per sq ft, Altamount Road is the costliest neighbourhood in India. It ranks ninth in the Forbes list of top 10 most expensive areas in the world. In Manhattan, New York City, apartments in Soho, Greenwich Village and Midtown are in the $1,500 per sq ft range.

At $36,500 (Rs 22 lakh) per sq ft, Pollock Path on Peak in Hong Kong is one of most expensive stretches of real estate in the world. The Peak is a hill located near the central business district and Lan Kwai Fong, a street lined with pubs that remain open till 6 am every day.

Hong Kong and Mumbai share similar problems such as high population density and lack of space. Even money cannot guarantee an apartment in a sought-after address, which is why developers in Mumbai have spread out, creating ‘islands’ of luxury that stand apart from the city’s urban sprawl. The freeing up of mill land in Lower Parel has spurred the growth of luxury apartments, which average at about Rs 30,000-32,000 per sq ft. High-rises are now a common feature in middle class neighbourhoods such as Chembur and Matunga, while expats and the young rich have made Bandra their playground. 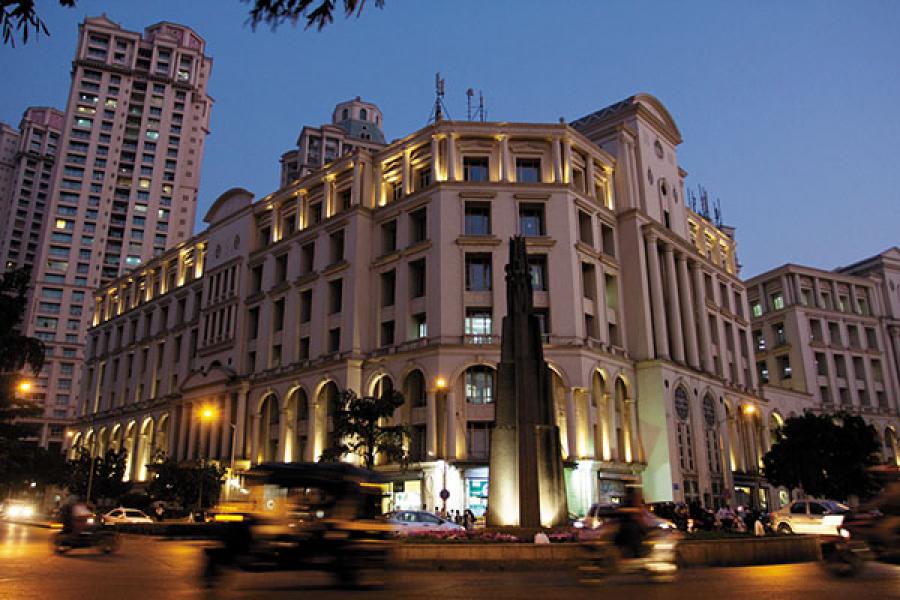 Image: Manoj Patil for Forbes India
Powai, Mumbai
Powai, formerly a village with a lake, has witnessed a massive makeover, to become one of Mumbai’s most well-planned residential and commercial hubs. The aim was to create a neighbourhood that catered to the business area of Seepz. With its proximity to IIT, Powai, the area has become home to many startups.

Joji George, who heads UBM India, the country’s largest trade exhibition organiser, is satisfied that he has found a substitute to localities he resided in while working in Singapore and Kuala Lumpur. If the traditionally wealthy want the right neighbours, then the new tribe of rich Indians—those who reside in luxury apartments at Powai or even Gurgaon in NCR—want a room with a view. High-rises that tower over the rest of the city with vistas of lakes and mountains sell at a premium.

“I wanted a large place with all the modern amenities; one that is quiet, self-contained and yet close to my place of work. This I found in Powai. It is my oasis from the city chaos,” says 43-year-old George, who owns an entire floor of the luxury ‘Lake Homes’ complex developed by Ekta Supreme Housing. It takes George only 15-20 minutes to reach his office in Saki Naka.

Space and exclusivity in Delhi
Gated communities and group housing luxury complexes with towers evoke only shudders of horror in Delhi. Bungalows are de rigueur and Lutyens’ Delhi is the abode of the rich: The roster of residents reads like a Who’s Who of India’s corporate world. Ravi Jaipuria, chairman of RJ Corporation, and VC Burman, chairman emeritus of Dabur India, own homes on Prithviraj Road. Analjit Singh (chairman, Max India), Naveen Jindal (chairman and MD of  Jindal Steel and Power), and KP Singh (chairman of DLF) own property on Aurangzeb Road. Deals in this area are in the Rs 100-400 crore range.

Another residential address that attracts the rich is Amrita Shergill Marg, where Sunil Bharti Mittal, the founder and chairman of Bharti Enterprises, resides. “A typical deal in this area would be about Rs 150-300 crore, and they take place only once every two-three years. It’s a rare occurrence. Even when property moves in these locations, it does not take place in the public domain,” says Om Ahuja, CEO-Residential Services of the real estate consultancy firm Jones Lang LaSalle India.

To meet the demand, builders have hit upon a happy compromise where newer luxury buildings house a single apartment on an entire floor. Developers call them ‘builder floor apartments’. With private swimming pools, separate entry and recreational centres, these flats give the illusion of independent bungalows. The exclusive neighbourhood of Jor Bagh has a mix of both bungalows and such apartments. Here, property prices range from Rs 75-150 crore.

Buildings in new emerging luxury locations in Delhi such as New Friends Colony, Vasant Vihar, Vasant Kunj and Hauz Khas follow a similar plan: One apartment per floor. A unit in these locations sells for Rs 5-20 crore. The size of an apartment—some are duplexes—range from 3,000 to 10,000 sq ft. A typical flat will have two car parks in the basement, an independent access entry, a private terrace and an outhouse. There are separate quarters for hired help.

Patanjali Keswani, chairman and managing director of Lemon Tree Hotels identifies Jor Bagh, Shantiniketan, Malcha Marg and Vasant Vihar as some of the best neighbourhoods to live in. These areas are well lit, have wide roads and parks, and no dearth of parking space. “From a safety and security standpoint, it’s important to live in a good community,” he says.

In Gurgaon, buildings with apartments occupying a single floor are rare, but the city has its fair share of gated communities that have come up over the last five years. There are at least five to six luxury properties near the golf course such as DLF Magnolias and Emaar’s Marbella. Prices can go up to Rs 10 crore.  “A large part of the buyers in these Gurgaon projects are small- and medium-sized business owners, who have their offices in areas of Udyog Vihar and Sohna Road,” says Ashish Jerath of Emaar MGF.

Old is still gold in Chennai
If there’s one city that’s the antithesis of Gurgaon, it’s Chennai. The city has stubbornly resisted gated communities and luxury complexes. Traditionally wealthy enclaves such as Boat Club Road, Anna Nagar and Adyar are valued for their proximity to the sea and their quaint bungalows. Most of the new development projects are limited to the city centre.

KN Sivasubramanian, former chief investment officer with Franklin Templeton Mutual Fund, lives at Palavakkam on East Coast Road. He spent the initial years of his career in Andheri, Mumbai, and would commute to his office in Churchgate by train. That was in the mid-’90s. When the opportunity arose, he jumped at the chance to return to the serene neighbourhood of Chennai he grew up in.  “[Chennai] allows you to work at your own pace. Travel time is considerably lower compared to Delhi or Mumbai. Citizens are able to strike a balance between work and personal life, but growth is outpacing infrastructure,” says Sivasubramanian.

Chennai strikes the delicate balance between the old and the new with grace. “The city is proud of its culture, but at the same time it embraces the new seamlessly,” says Srikanth Meenakshi, founder director of FundsIndia.com, an online distributor of mutual funds.

Bangalore wears many hats
Bangalore has morphed from a pensioner’s paradise to a city that caters to the IT sector and the software professionals who now call it home. Its continued growth is reflected in development projects both within the city limits and in the periphery. One of the more expensive neighbourhoods is Vittal Mallya Road where the UB Tower is located. Residential properties in this neighbourhood begin at Rs 27,000-30,000 sq ft. Houses in the exclusive Richmond Road sell for Rs 42,000-45,000 per sq ft. Bangalore’s newer luxury home destinations are near Satya Sai Ashram and the International Tech Park (ITPL), or Whitefield.

TV Mohandas Pai, chairman of Manipal Global Education and a former board member of Infosys, has been living in Bangalore for 55 years. He loves the city despite the many challenges it faces. From India’s public sector town to Silicon Valley, Bangalore has worn many hats. “But now, it has to rediscover itself and work towards becoming a modern metropolis with good governance,” he says. Pai grew up in Nehru Nagar, a middle-class neighbourhood. Today, he resides in an apartment complex at Ali Askar Road. It’s a community of people from different cities and backgrounds. “I feel it’s the people that make a good neighbourhood. They have to be sensitive and compassionate towards each other. Today, the small-town community spirit has disappeared from our neighbourhood. We need to have that sense of connect again”.

(This story appears in the 16 May, 2014 issue of Forbes India. To visit our Archives, click here.)