SBI Mutual Fund's Navneet Munot follows the ESG framework while picking the right companies for his portfolio, a strategy that has reaped rich returns 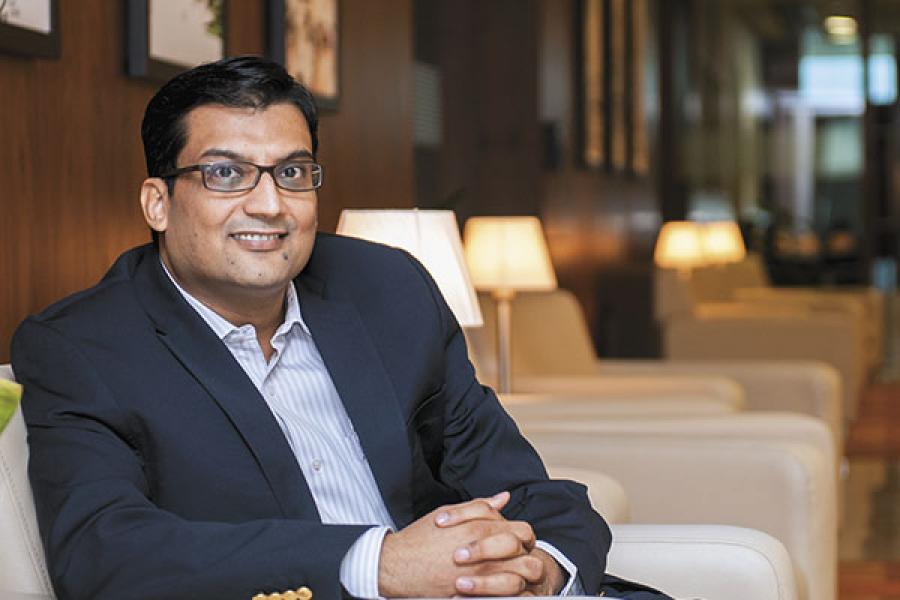 Look at what is happening in Delhi. The state government has implemented an alternate-day travel plan [the odd-even rule] for vehicles to improve the city’s air quality. Not long ago, there were issues related to allocation of coal mines and telecom spectrum.

I see a common thread to all this. All these issues are ultimately connected to governance and how we address questions related to the environment,” says Navneet Munot, chief investment officer (CIO) at SBI Mutual Fund.

It was almost the end of the year when Forbes India met him at his ninth-floor office in Crescenzo in Mumbai’s Bandra-Kurla Complex. The office was nearly deserted as most employees were on their year-end holidays. Munot did not have that luxury as he was just back from Ahmedabad for a series of back-to-back meetings.

According to him, rationing measures will also be implemented in other areas like water and electricity. “The government might regulate supply of water and electricity too,” he says. Today, corporate India pays only a trivial amount for the water it uses and Munot feels that all this might change as climate change effects like drought and pressure on natural resources start to take a toll.

Munot took over as the CIO of the fund in December 2008 and since then, it has only grown in size. With total assets of Rs 1,00,055 crore under management, SBI Mutual Fund is the sixth largest mutual fund in the country. Its equity funds are at the top of their performance matrix. Over the last five years, SBI Mutual Fund’s Small & Midcap fund has grown by 22 percent annually, against a category average of 16 percent. The fund’s top holdings include Solar Industries, Manpasand Beverages and Atul Auto.

To a large extent, the stellar performances of the funds can be attributed to Munot’s passion to invest in clean companies with good governance practices and a conscience to be environmentally responsible. Munot has focussed on areas related to corporate governance for many years.

He took up many issues raised by shareholders from the day he took office. SBI Mutual Fund was among the three mutual funds that opposed the merger of the scam-tainted Satyam Computers with Maytas Properties, where both the companies had common promoters. In 2014, his fund opposed Maruti Suzuki’s plans to set up a plant in Gujarat as a fully-owned arm of its Japanese partner Suzuki Motor Corporation. In both these cases, the fund felt that the moves of these companies were going to hurt the interest of minority shareholders.

Companies like Vedanta faced strong resistance in operating the Niyamgiri bauxite mines in Odisha and Maruti faced a backlash from investors because of the trouble with labour unions at its Manesar plant.

Munot follows a ‘matrix’ to avoid such companies. He has adopted ‘Environmental, Social and Governance’ (ESG) as his investment philosophy. The framework offers portfolio managers an insight into a company’s management, culture and risk profile by taking advantage of the increased level of scrutiny associated with the increasingly popular ESG analysis. It also gives teeth to minority shareholders to question the management if they feel board decisions are harmful to the long-term shareholder.

Foreign institutional investors (FIIs) have become very conscious about where they invest. The Forum for Sustainable and Responsible Investment (US SIF), a US-based membership association that works to advance investment practices in clean companies, is optimistic about sustainable investment. According to their study, the assets of funds that incorporated ESG have been on a trajectory of dramatic growth since 2007 in the US.

These assets—excluding assets of separate account vehicles and community investing institutions—stood at $4.31 trillion across 925 distinct ESG funds in 2014, which is more than four times the $1.01 trillion tracked in 2012.

Fund managers that use the ESG strategy account for around $1 for every $6 professionally managed in the US. In India, SBI Mutual Fund is one of the few funds that follows ESG systematically; it has checklists for each of the environmental, social and governance aspects.

One of the companies that Munot decided to invest in is VA Tech Wabag, which is engaged in water effluent treatment, and another is Thermax, an environmental engineering company. The fund decided to avoid metals in 2010 because the investment team felt that most of these companies were generating profits because they had access to natural resources which were underpriced in India. Likewise, the fund was negative on thermal power companies due to their greenhouse gas emissions and high carbon footprint. 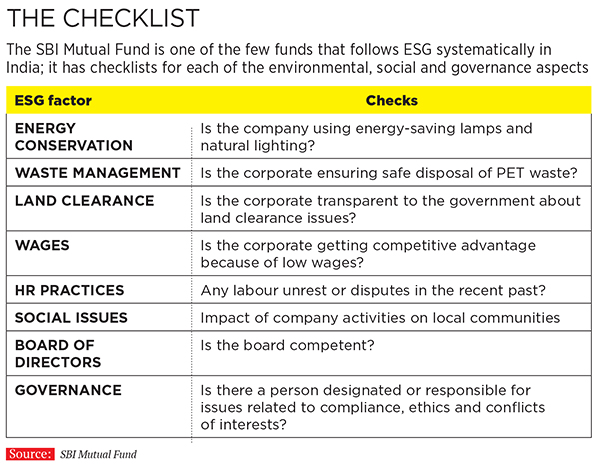 Munot talks about how his fund avoided companies that were allegedly involved in the coal allocation scam, where the comptroller and auditor general (CAG) accused the United Progressive Alliance government of allocating coal blocks without proper scrutiny during its first tenure from 2004 to 2009. Likewise, his fund avoided firms that were allegedly involved in the spectrum allocation scam, where the government was accused of undercharging telecom companies for the frequencies allotted to them. The companies that were part of the coal scam as well as the spectrum scam would never have fit into the ESG parameters of SBI Mutual Fund.

SBI Mutual Fund is one of the few mutual funds that works with Institutional Investor Advisory Services (IiAS), a firm that tracks corporate governance and good corporate practices in India. The firm guides and helps the fund with data and analysis. Amit Tandon, CEO, IiAs, has seen how Munot’s thinking has percolated down to every employee of the mutual fund. “Navneet [Munot] thinks deeply about governance-related issues and the impact these have on the performance of the various schemes,” he says.

Usually, when mutual funds find that their portfolio companies are violating ESG norms, they simply sell the stocks of those companies. But Munot has realised that this cannot be the solution. He feels it is time for fund managers to become active. “As institutional investors like us become larger and have a bigger stake in the economy—foot voting won’t do. The investor will have to proactively engage with the management. And that is what we are doing,” he says.

Munot keeps a long-term perspective on everything he does. The ESG framework merges well with his personality. “Munot is one of those fund managers who adapts to change. I have seen him grow from a fixed-income fund manager to a ‘multi-asset’ manager. He adapts quickly to new situations and swears by the ESG framework for investing. Many more funds may follow it over a period of time,” says Vikaas Sachdeva, CEO, Edelweiss Asset Management.

When Munot joined SBI Mutual Fund as CIO in 2008, it had a lot of legacy issues and did not have a philosophy for their schemes. Munot and his equities head, R Srinivasan, quickly worked out a framework where every scheme was given a mandate and an objective. Munot decided to make the organisation structure flat and created an environment where any decision related to investing could be questioned even by junior analysts or fund managers. “He has made this team his second family and that has really helped us in working together. The attrition rate has dropped,” says a veteran fund manager at SBI Mutual Fund who has worked under different CIOs in his career, on condition of anonymity.

Munot, 45, has two decades of experience behind him and was associated with Morgan Stanley Investment Management and Birla Sun Life Asset Management Company before taking charge at SBI Mutual Fund.

He has big ambitions for SBI Mutual Fund. Beyond size, he wants to be clear about how he grows his business. He wants SBI Mutual Fund to be a fund house that maintains global standards in the asset management space. To do this, the fund has contributed to the efforts of the CFA Institute and the National Stock Exchange to create a shareholders’ guide for voting in annual general meetings (AGMs) and is also the first mutual fund in the country to voluntarily adopt the CFA Institute’s ‘Asset managers’ code of professional conduct’, which is followed by 1,000 asset management companies (AMCs) globally.

While he is doing all this, he understands that there will be times when returns will not be quick. But he is willing to wait. Munot believes that sustainable business practices, which operate on the best ESG principles, would yield better financial performance and deliver better returns in the long run. But the costs of non-compliance are huge; not only for his fund, but also for the environment. And environmental degradation poses a huge threat to the survival of business in general. “The market has realised this fact and it is only a matter of time till ESG becomes a norm and all stakeholders in the economy understand its worth,” he says.

Before concluding the meeting, Munot points out that the lighting and air-conditioning in his office have sensors. They turn on only when the room is occupied. Point taken.