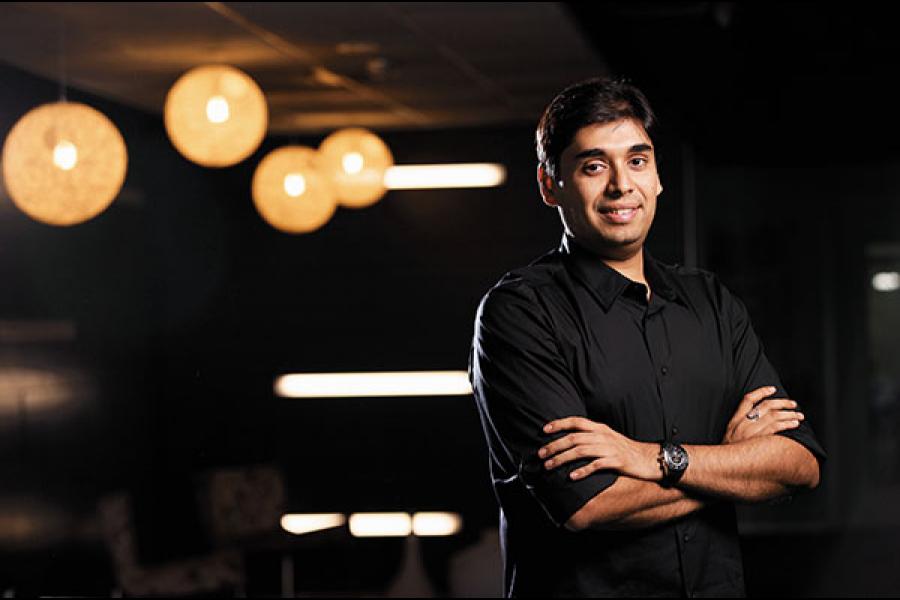 Award: Outstanding Startup
InMobi
A global mobile advertising network, founded by Naveen Tewari, Abhay Singhal, Amit Gupta and Mohit Saxena
Education: Three of them graduated from IIT-Kanpur, one from IIT-Roorkee. Tewari did his MBA from Harvard Business School
Why the company won this award: InMobi has become the number one independent mobile advertising company. It taps into 800 million mobile users every month in 165 countries. It got revenues of about $200 million in 2013, and three rounds of funding (totaling $215.6 million)

In 2007, a startup almost collapsed within six months of inception. The four co-founders—friends who had either given up well-paying jobs or quit their own ventures to launch this company—became acquainted with the bitter taste of failure. Its business model had one fault line too many, and funds ran dry.

It could have been an unknown death for yet another startup. But Naveen Tewari (now 37) and his friends were not willing to see their company, mKhoj, become a doomed statistic. They went back to the drawing board, changed their business model and resuscitated their dying venture. That very year, mKhoj was reborn as InMobi.

Headquartered in Bangalore, InMobi has positioned itself as the go-to company in the mobile advertising business: It provides traditional advertising solutions, mobile app analytics, consumer insights to advertisers and other related services. It has tied up with 36,000 web publishers, including gaming sites, to enable brands and app developers to seamlessly integrate their products into mobile content.

It has emerged as one of the world’s largest independent (it does not own a social media platform) mobile ad networks, engaging 800 million consumers every month across 165 countries. Having developed its proprietary cloud-based technology to deploy mobile ads with the click of a button, InMobi allows clients to remotely publish their ads on sites and apps of their choice. Its roster of clients includes Indian media houses Network 18 (publisher of Forbes India) and NDTV, international brands like Macy’s and Lancôme Paris, and Japanese videogame developer Sega.

The accolades haven’t stopped pouring in. It was recognised by MIT Technology Review as one of the ‘50 Disruptive Companies of 2013’.

“We want to become one of the top 10 internet companies in the world by 2020,” says Tewari, CEO, InMobi. Co-founders Amit Gupta (38), Abhay Singhal (34) and Mohit Saxena (39, and vice president, technology) are also driven by this need to prove that their company can take on behemoths such as Facebook and Google.

For now, it’s on the right track: InMobi clocked revenues of $200 million last year, and expects to finish this December at $250 million. Its margins are a healthy 40 percent compared to the five to 10 percent margins in the television and print ad industry.

But the climb to the top has been an arduous journey filled with missteps, frustration and near defeat.

Of Dreams and Hope, Dashed
In late 2006, IIT-Kanpur alumni Tewari, Gupta and Singhal, along with Saxena (from IIT-Roorkee), came together to develop a mobile search company that used text messages, or SMSes, to update subscribers on local information such as neighbourhood vendors, lucrative deals and sales. They were so convinced by the brilliance of their idea that Saxena quit his job with Virgin Mobile USA to return to India. But mKhoj found no traction among investors.

Undeterred, the founders dipped into their personal savings, maxed out their credit cards and finally stopped taking salaries.

For Tewari, it looked like yet another failed startup: He had unsuccessfully tried to launch two ventures while completing his MBA at Harvard Business School.

“[At the time] we were very confident about our idea. People need information about deals in their city, and will happily pay for an SMS. We got an initial seed funding of $500,000 from Mumbai Angels. We felt we had cracked it. And then, boom, we crashed,” says Tewari. 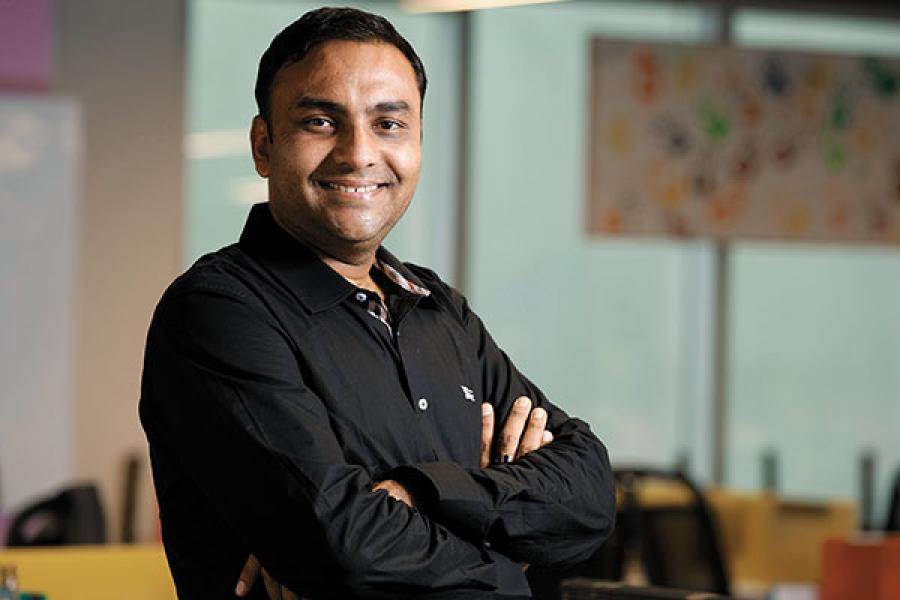 Image: Mallikarjun Katkol for Forbes India
Amit Gupta
Their understanding of the Indian consumer had missed out on a critical piece of the puzzle: “The team had failed to take into account the cultural aspect of India, where every individual on the road is a source of high quality [mostly user-friendly] information,” writes Tewari on the company’s blog. His search-based listing model, which was along the lines of the daily deal website Groupon, could not displace the power of word-of-mouth communication.

“In six to eight months, we realised we were wrong. Our failure was deep-rooted in many ways. It was a humbling experience,” recalls Tewari.

What convinced them that their business model was flawed was when they were approached by wealth management services company Barclays India for a campaign. It gave the startup Rs 10 lakh with a mandate to spend Rs 8 lakh on the SMS part of the campaign, and Rs 2 lakh for mobile advertising. “I could only spend Rs 8,000 a month on SMS-led advertising, while we went through the Rs 2 lakh for mobile advertising in one week,” recalls Singhal.

They realised that, in India, people were not using SMSes for business-to-business or business-to-consumer interactions. And that consumers had already taken to surfing the web on their smartphones.

Further, clients were now willing to advertise on mobile internet sites. At the time, there was no big player in India that operated in the mobile ad arena as everyone was focusing on internet advertising through computers. Google AdMob, which helps monetise mobile apps and websites, was not yet selling directly in India.

The founders had stumbled upon a new market. But the failure of mKhoj had dealt a blow to their confidence. In their two-room apartment-cum-office in Andheri, Mumbai, they asked themselves some painful questions: ‘Are we giving up too early? Do we have a guarantee about the second path?’

Tewari says, “As entrepreneurs you are making decisions with 10 percent of information in one percent of the time. It boils down to gut instinct. I would be lying if I said we had research and data and graphs—we had none. Zero.”

But they decided to take a leap of faith and change the business model to advertising on mobile. They were going to build a mobile ad platform that allowed companies to advertise on mobile-version websites.

The idea of InMobi was born. 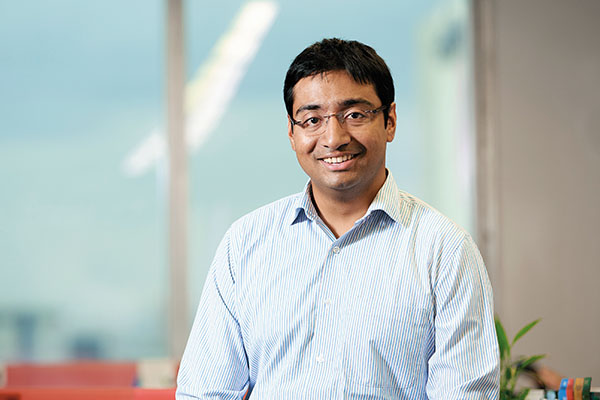 Convincing investors
In barely a month, a team, led by Saxena rewrote the original code he had built for the text-based business model to a mobile advertising one. But, by then, they had run out of money and had to do the rounds of venture capitalists (VC) and private equity (PE) players to convince them of InMobi’s potential success. In 45 days between December 2007 and January 2008, they met 21 prospective investors, but not a single VC in India was interested.

Their funds had reduced to a trickle. By February 2008, they had only $2,000 in the bank and less than a week before the startup would have to shut down. Tewari decided to travel to the US, to give it one last try. But they didn’t have enough money for a ticket.

Desperate times called for desperate measures. Singhal, posing as Tewari’s assistant, convinced a travel agent that InMobi was a big client looking for a large number of business class tickets to be provided all through the year. As per the deal he negotiated, payment would be made 60 to 90 days after the travel date. He bought a ticket to San Francisco for Tewari. “I was in the plane wondering if I could just sell this ticket and move to economy because clearly I didn’t deserve it,” says Tewari. 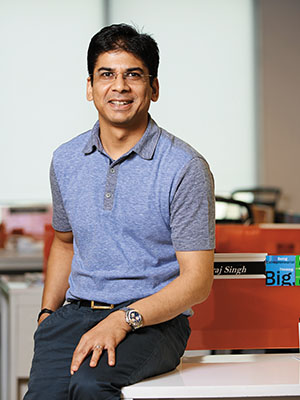 Image: Mallikarjun Katkol for Forbes India
In San Francisco, he began cold-calling possible investors. Within a fortnight, he got Kleiner Perkins Caufield & Byers (KPCB) and Ram Shriram, who heads the VC company Sherpalo Ventures, to jointly invest $7.1 million in InMobi. The meeting with them ended in 40 minutes flat. Tewari remembers walking out of the building in a daze. “I drove aimlessly for two hours in San Francisco’s Bay Area. It was astonishing,” he says. His eyes moisten as he recollects that fortuitous day.

With the funds pipeline flowing again, InMobi built a mobile advertising platform. Today it has grown out of its two-room workplace, and has offices in 16 countries. InMobi is one of the biggest mobile advertising networks in China, India, the Middle East, Indonesia and Malaysia—all emerging economies. Gupta, who until recently was chief revenue officer, is relocating to San Francisco to scale up the US business.

Taking on the behemoths
InMobi may have been an early mover in the mobile revolution in India, but now the challenge will be to stay ahead of its rivals, especially if it wants to continue competing in the international arena. Increasing ad spends on the mobile medium has attracted a slew of hungry Indian entrepreneurs who have launched companies such as Affle and Vserv. But its biggest competitors are Facebook and Google AdMob. Facebook’s revenue for the quarter ending June 2014 was $2.91 billion. Mobile ads account for 62 percent of its ad revenue, a rise from 41 percent for the same quarter last year.

Whether InMobi will have the muscle to take on these giants is yet to be determined. “On the competition with AdMob or Facebook, the answer lies in execution of strategies. The key is having a combination of products, [InMobi’s] approach to sales in different markets, securing global and local brands, and how it manages ad inventories,” says Shriram.

The good news is that the market is exploding. Global mobile advertising spends have increased from about $2 billion five years ago to $18 billion in 2013, says KPCB partner Mary Meeker in her Internet Trends Report. It’s expected to close at $30 billion by the end of calendar year 2014. China, India, Brazil and Indonesia already account for around 30 percent of a total of 5.2 billion mobile phones worldwide.

It’s become almost mandatory for companies to invest in mobile apps, and InMobi has stepped in to facilitate developers. “It has played a key role in getting users to download apps, get the app economy going,” says Shriram. His Sherpalo Ventures has invested twice—in two separate rounds—in InMobi. In the third round of funding in September 2011, the startup received $200 million from Softbank to plan its next round of innovation.

InMobi is using these funds to expand into the mobile commerce business. Tewari predicts that global transactions worth $250 billion will take place in the next few years.

Saxena is already building a mobile commerce solution platform. This time around, he has a team of pedigreed engineers—IIT grads as well as former employees of Yahoo!, Google and Amazon.

InMobi’s founders are hunting for the next pot of gold in this ever-evolving world of mobile technology. Every day, Tewari wakes up at 4 am and goes for an 11-km run on Bangalore’s streets. That’s when the father of two thinks about the past, revels in the present and plans for the future.

Tweets by @forbesindia
NTPC's Power Ranger: Arup Roy Choudhury and his firm's stock has risen exponentially
A leader must lead from the front