Distancing yourself from the intoxicating substance, even when it's time to jet off for some downtime, could become something of a trend thanks to the so-called sober curious movement 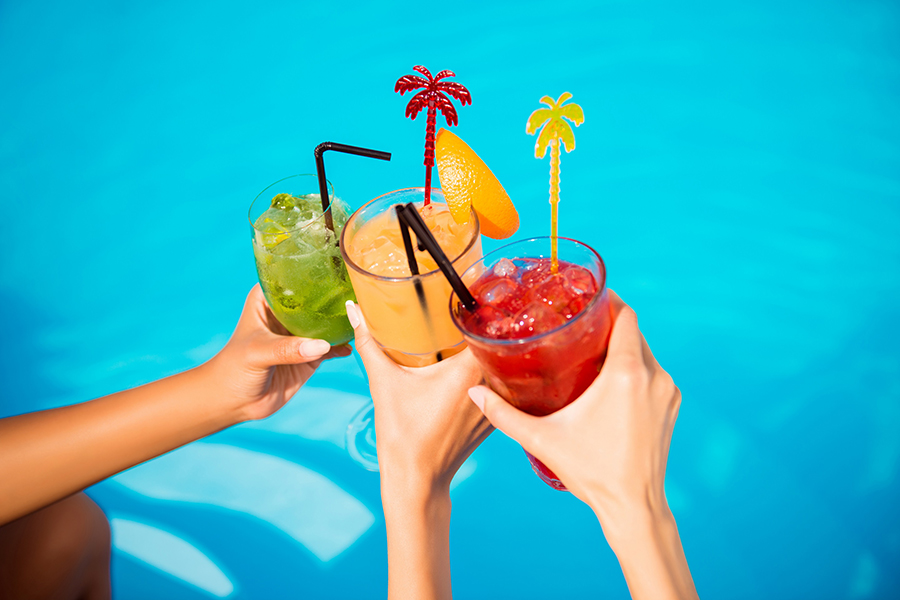 Dry January is over! But if you've enjoyed the experience of a life without alcohol, why not extend the concept to your next vacation? Distancing yourself from the intoxicating substance, even when it's time to jet off for some downtime, could become something of a trend thanks to the so-called sober curious movement.

From that little drink after takeoff to celebrate the beginning of a vacation, to that cocktail at the beach to savor the flavor of chilling by the sea—not to mention pre-dinner drinks, then a glass of wine to accompany the meal. It seems that smartphones aren't our only travel companions, as alcohol is also often a part of the experience. But in a context of declining alcohol consumption—a \ an average of 200 liters of alcohol per year in 1960 compared to 80 liters in 2018 according to INSEE—hangovers are no longer on the vacation agenda. A new emerging trend, building on the spirit of the UK's Dry January campaign—which involves cutting out alcohol for a month—sees vacationers ditch the booze when heading off on their travels.

Last year, the Lonely Planet guide devoted a topic to this trend, which is only likely to grow given the success of the Dry January movement. The rapidly expanding offer of alcohol-free drinks is sure to help holidaymakers choose a mocktail instead of a margarita by the pool. Non-alcoholic bars are also popping up all over the world, from the state of Colorado to Paris. In the City of Light, the Drinks & Co concept bar pays as much attention to its non-alcoholic cocktail offerings as to its traditional alcoholic beverages. According to the nightlife experts at Time Out, its alcohol-free version of the negroni is made with a spice distillate instead of gin, plus a bitter and a non-alcoholic vermouth. And the result is very close to the alcoholic version, according to the publication.

In stark contrast to binge-drinking, new forms of parties and nightlife are taking over from those where getting drunk—sometimes to the point of oblivion—were once popular with teenagers. So-called sober parties or sober raves started being held in Sweden as long ago as 2014. In Berlin, the Sober Sensation collective has specialized in organizing alcohol- and drug-free parties. Events will soon be planned all over Europe, from the UK to Poland. Other networks integrating more of a wellness dimension, often with sporty morning dance sessions, such as Daybreaker in the United States, or Morning Gloryville in London, are all ideas for partying on vacation without being constantly accompanied by an alcoholic drink.

Some travel agencies even offer guaranteed alcohol-free breaks. In the United States, the Sober Vacations International company came up with the concept in 1987. This pioneering business was first launched to accompany travelers who had fallen into alcohol excesses or addiction and wished to go on vacation without having to fight the innumerable temptations. Stays are organized in popular tourist areas where alcohol often flows freely, such as the Mayan Riviera in Mexico.

In the wake of wellness offers where yoga and massages are the main activities, the hospitality industry is also waking up to menus with more in the way of non-alcoholic or low-alcohol drinks, according to the giant IHG Hotels & Resorts. In Scotland, the owner of a hotel in the Orkney Islands went even further by banishing all alcohol from its bar (but guests are allowed to bring their own bottles).

Are you sober curious?

These new initiatives are part of a broader movement spurred by Ruby Warrington's book "Sober Curious," published in 2018. In it, the British author deciphers our relationship with alcohol and suggests that her readers drink more consciously to weigh up when it's really appropriate to drink. Warrington returned in December 2020, a few months after covid lockdowns and their various Zoom drinks, releasing a guide to help people change their way of drinking in a hundred days ("The Sober Curious Reset"). It's really about moving away from the seemingly binary choice that has long been offered: "are you drinking or do you want some water?" When it comes to toasting, it has long been more socially acceptable to raise a glass of wine or a pint of beer. How many of us have ever felt embarrassed to say no to a glass of something alcoholic?