Five centuries after Goans began making feni—a pungent, fermented liquor not for the faint-hearted—a new crop of distillers is hoping to take the spirit global 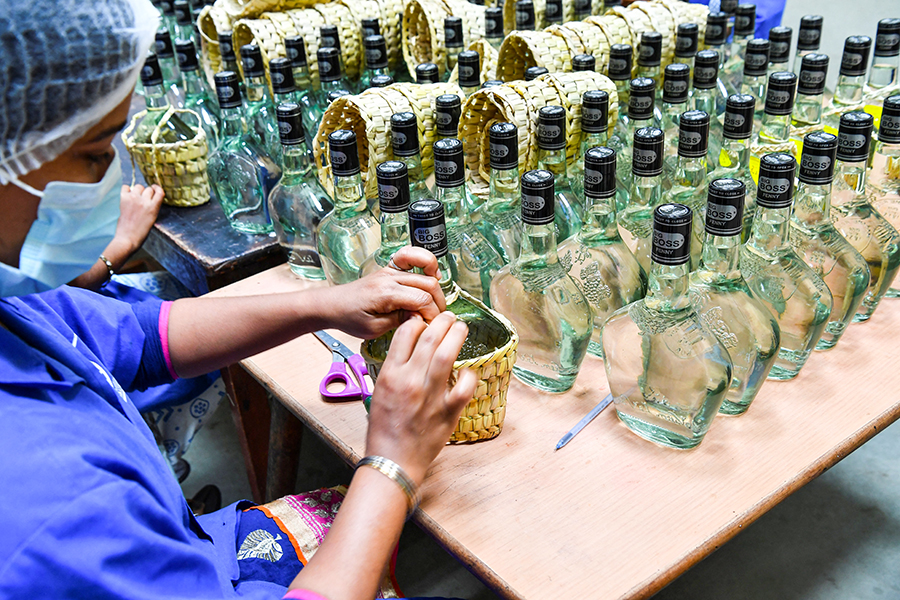 But first, they have to convince other Indians to drink it.

Usually made from crushed cashew apples or coconut palm sap, the potent beverage has in recent decades fallen out of favour in Goa— a former Portuguese colony south of Mumbai—with the arrival of foreign liquor brands.

"I wanted to translate traditional knowledge for a modern audience," said Hansel Vaz, whose Cazulo distillery uses centuries-old techniques to make feni while inventing cocktails that are easy on the nose and smooth on the palate.

Production is limited to the cashew apple harvesting season from February to May, with custom dictating that only the fruit that falls to the ground is ripe enough to be used for feni.

While more modern distilleries use metal crushers to extract the juice for fermentation, at Cazulo the cashew apple—its nut removed—is dumped into a stone basin carved into the ground.

A barefoot farm worker holds on to ropes and stomps the fruit until the juice is extracted and transferred into underground clay pots.

After three days, the fermented liquid is boiled and distilled. Fresh juice is then added to it for a second round of distillation.

Rite of passage
Feni's strength was traditionally measured by looking at the size of the bubbles formed when it's poured into a glass.

Today, distillers use alcohol meters or take a sip to infer the quality of the tipple.

The liquor historically played an important role in Goan society, according to Biula Pereira, who has written a book about the spirit first concocted after the Portuguese brought cashews to the colony in the 16th century.

"Feni was used for every occasion, for every rite of passage. It also served a medicinal purpose as a remedy for the common cold and fever," she told AFP.

Vaz's grandfather drank it daily, but by the dawn of the 21st century, younger Goans had little appetite for its fiery pleasures.

As he watched gin and mezcal take over the world, Vaz, then a geologist working overseas, felt a compulsion to revive his family business and "make feni cool".

"It was about expressing our cultural identity," said the 38-year-old of his ambition to create a market for premium bottled feni made in Goa.

That sense of local pride is at the heart of many feni businesses.

The director of Madame Rosa distillery Mac Vaz—no relation to Hansel—said his mission was to end the "colonial hangover" that prompts some Indians to dismiss local products in favour of imported goods.

But as a teetotaller who only took his first sip of feni aged 23, he realised firsthand that new patrons would need some coaxing to down their drinks.

At Cazulo, guests are invited to watch the feni-making process before sampling the spirit on its own as well as in cocktails with guava juice, lime and other mixers.

The efforts seem to be paying off.

At a recent Madame Rosa tasting session, businesswoman Shamina Shamji, who always steered clear of feni because it was "too sharp, too strong", warmed to the mango and feni cocktail she was nursing.

"I would definitely order this at a bar," the 50-year-old told AFP.

Country liquor
Goan brands are looking to tap a growing market of cosmopolitan and adventurous Indians.

But national regulations make it difficult for feni to be sold outside the state because the spirit is officially classified as "country liquor".

Many Indians also associate that designation with illegally-brewed alcohol that lands people in hospital—a marketing nightmare for feni producers.

Others warn that rapid expansion could dilute the very essence of feni they are trying to preserve.

"It's not about slapping on a fancy label and making a quick buck," said Hansel Vaz of Cazulo, which has exported to North America, Southeast Asia and Europe.

"It is a traditional craft. You can't mass-produce it."

Tweets by @forbesindia
Lifelong learning is no longer optional, it's necessary: Ronnie Screwvala
To the cloud and beyond: Leading change with innovation