The Sharmas have built a sizeable business on the back of liquor retail andpower trading in India's north-easternmost state of Arunachal Pradesh. Now comes the challenge to scale it across India 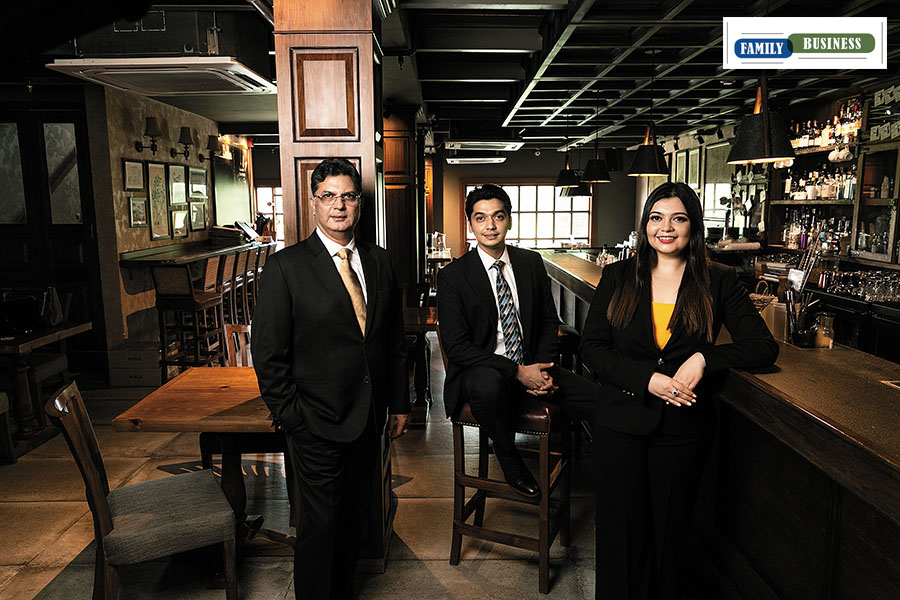 
August 2010. Karan Sharma, a graduate in banking and finance from Russell Square International College in Mumbai, was taking baby steps into one of the divisions of his family business. His father, Niraj Sharma, started the power trading vertical in Arunachal Pradesh, where he also ran a business in liquor retail, distribution and manufacturing since 1995. Karan, who aspired to join the Army but was persuaded by his father to study commerce in school, was trying to revive the power trading unit—Arunachal Pradesh Power Corporation— which was set up in 1997 but lying dormant for over a decade.

If the task was tough, Karan’s attitude made it worse. He sported long hair, baggy jeans, and loose T-shirts in business meetings. “I was kicked out of a number of meetings. Nobody took me seriously,” he recalls. Clients would press the panic button sooner, rather than later. “They wanted to talk to my father and find out if the order could be delivered.” Power trading was a serious business, and Karan looked causal.

Five years down the line, Meenakshi, Karan’s sister, made her debut in the liquor business in Arunachal Pradesh. After working as an internal auditor at PricewaterhouseCoopers for over six months—which made her realise that she was not cut out for a corporate role—and arming herself with a PG diploma in food and beverage from Switzerland, the second-generation entrepreneur was all set for a heady start.

For three months she sat in her father’s cabin from 10 am to 2 pm, to silently observe his interactions with employees. After a lunch break, she would go to the factory and spend another 4 hours with workers. “Nobody took me seriously to begin with,” she recalls. After all, a girl in the liquor business was an aberration; workers bypassed her and approached senior officials for work, and even the founder, who started contract manufacturing under United Brothers Distilleries for Diageo, Allied Blenders Distillers, and its own brands such as Royal Casino whiskey and Honey Beehive brandy.

Cut to August 2020. The family business has clocked a turnover of ₹2,000 crore in fiscal 2020. Three-fourths of it came from power trading, and the rest from liquor. Karan has made his company among the top five in power trading in India, with offices in Gurugram, Noida, Guwahati and Bengaluru, and now plans to set up ferrosilicon steel units. His sister has expanded the liquor retail business over the last few years, tied up with Allied Blenders Distilleries to produce Officers Choice Blue Whiskey from October 2018, launched vodka brand Romane, and will soon roll out wine brand Rubiru. 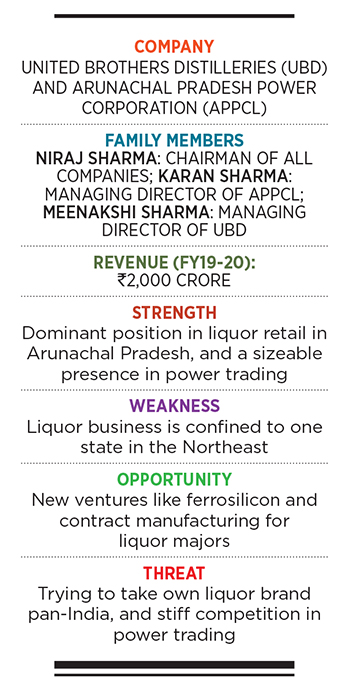 The patriarch is delighted. A family that made a modest beginning in liquor retailing in 1989 from Nagaland has seen the business grow manifold over the last five years. Meenakshi has not only broken stereotypes by being a woman in a liquor business, but has also expanded the company’s vision.

“Both are risk takers, aggressive and focussed,” says Sharma. Education, he feels, has a lot to do with their approach, and the vision they have for the family business. “I learnt from experience,” says Sharma, whose father was a contractor with the railways, and his grandfather migrated from what is now Pakistan to Assam in 1932.

Education is what Sharma lacked. Back in 1981, he finished his pre-university from Shillong in Meghalaya, and over the next few years started a liquor retail outlet in Nagaland. The business expanded to 10 stores and ran smoothly till 1989, when Nagaland introduced prohibition. Sharma’s business got disrupted, and he exited liquor. For the next three years, he tried his luck with medical equipment distribution, and even tried to start an educational institute in Dehradun. Nothing worked.

By 1995, he was back to liquor retailing and distribution from Arunachal Pradesh. Having learnt his lessons in Nagaland, he tried to diversify his business by opening petrol pumps and getting into contract manufacturing. Gradually, he became the biggest liquor retailer and distributor in the state with an impressive roaster of brands: Pernod Ricard, Diageo, Bacardi, United Breweries, Heineken, William Grant, Beam Global Spirits, Allied Blenders Distillers, and Radico Khaitan.

Sharma’s vast distribution footprint is what his daughter realised is their biggest asset. But what was needed most was to cement the tie-ups and expand production. In December, the Sharmas will commission their new brewery with an installed capacity to produce 6 million cases per annum, and has entered into an exclusive contract with Kingfisher to produce Kingfisher Ultra, Kingfisher Strong and Kingfisher Lager. “Meenakshi saw the potential in focusing on her own brand,” he says. She tied up with a Russian master blender Olga Morozova and launched Romane last December.

From hitting the local markets to getting feedback, to keeping a close eye on the sales team, Meenakshi had pressed on the gas pedal till March. Once the lockdowns began, she started manufacturing sanitiser and multi-surface disinfectant spray. “The idea was to support our employees, a majority of them women,” she says. “We couldn’t let them go.” The plan now is to take the vodka brand across India, and later across the globe. 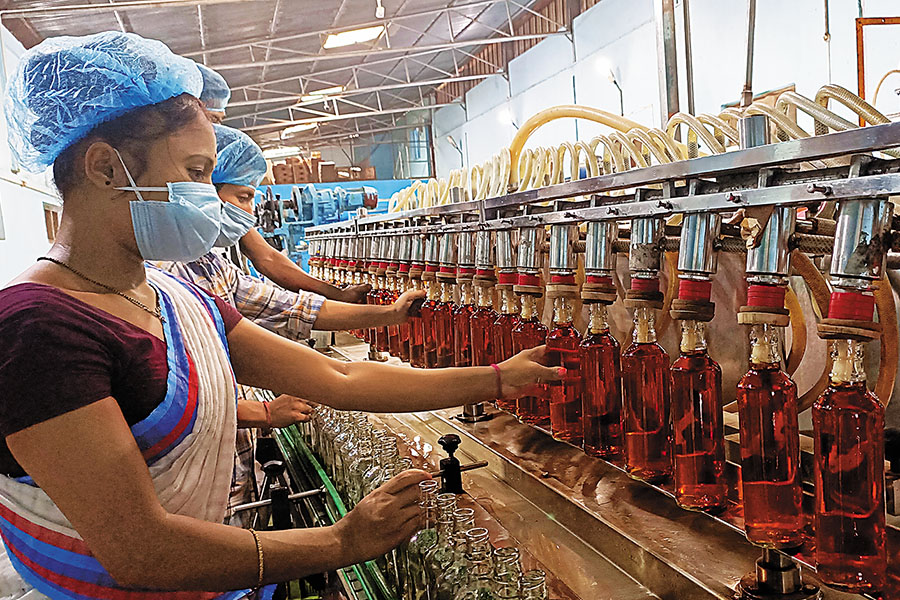 The second generation, say family business experts, has done a terrific job in scaling up the business. “Both have been dynamic, passionate and carried on the legacy by adding value to what their father had built,” says Hiten Muchhala, a professor of strategy teaching global family managed business programme at SP Jain School of Global Management in Mumbai.

The challenge, though, is daunting. Building a vodka brand and scaling it pan-India is not going to be easy. Secondly, having a manufacturing unit in Arunachal Pradesh and catering to markets across the country won’t make sound business sense in terms of pricing.

For Karan, the challenge would be to keep on aggressively expanding across the country. A meagre bottom line would also be something that the second generation would like to work on. For the year ended 2018, on operating revenue of ₹1,035 crore, Arunachal Pradesh Power Corporation had a profit after tax of ₹5.8 crore, according to an ICRA report, underlining the low-margin nature of the power trading business. Profit numbers for the latest fiscal were not available.

Sharma, for his part, is confident that the overall revenue of the family business will double over the next three years. As a conventional father he would like his son to take care of liquor and daughter to handle power trading, but as an entrepreneur he knows that its horses for courses. “Both know their business very well,” he says.

Meanwhile, Meenakshi, after being ‘empowered’ by the liquor business, is in no mood to even entertain talks of swapping roles or quitting the business after marriage. “Romane is my baby,” she asserts, adding that she is going to stick to the family business. “You can’t abandon your baby. In fact, there will be more babies to come,” she laughs.

Tweets by @forbesindia
Katherine Eban: Ranbaxy and the dark side of Indian pharma
Pioneering a GLOCAL Revolution: Glendale at the Helm