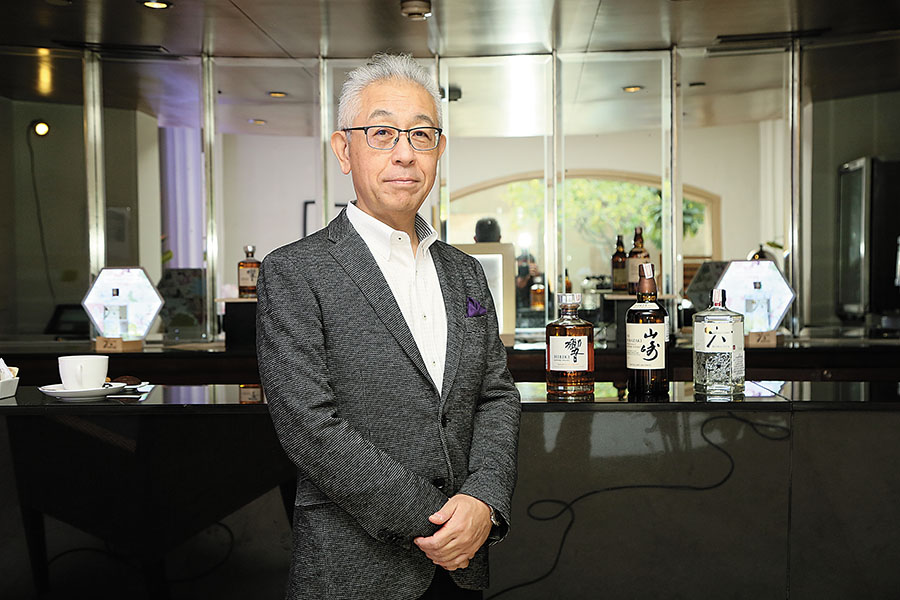 According to Japan’s traditional methods of blending whiskies, grain whiskies act as ‘dashi’, and are meant to accentuate the flavours of malts. Inspired by the wide variety of grain whiskies that are produced in Suntory’s Chita distillery, Shinji Fukuyo, the fifth chief blender at Suntory Spirits Limited, reimagined its role and produced this new blend that is a balance of subtlety and refinement.

In an interview with Forbes India, Fukuyo, who was born in Nagoya in 1961 and began his career at the Hakushu distillery by joining Suntory in 1984, talks about what sets Japanese whisky apart from Scotch, and how it has evolved over the years. Edited excerpts:

In addition, blending requires various types of component whiskies, and the two types of malt whiskies distilled at Yamazaki and Hakushu are not enough. Therefore, the distilleries are making great efforts to make various types of whiskies in a single distillery by using different distilling malts and yeasts, installing pot stills that have different sizes and shapes, ageing whisky in casks of different woods and so on. This diversity of whisky-making is also our unique craftsmanship.

Q. What are the differences in the natural elements between Japan and Scotland that make Japanese whisky distinct from Scotch?
Water in Scotland tends to contain more organic compounds and is sometimes dark, and its climate seems to be cold through the year. Japan’s pure and clean water produces sophisticated spirits and the dynamic climate through the year escalates whisky maturation in wooden casks. Scottish water would create bold whisky spirits and the cold climate gives calm maturation. In addition, we have a unique oak called ‘mizunara’ in Japan, while there is a lot of peat in Scotland to provide a smoky flavour. The mizunara oak gives a unique oriental note to the whisky when it is matured in wooden casks.

Q. What is the position that whisky holds in Japanese culture and tradition? How has this evolved over the decades?
While Japan was traditionally best known for its sake and shochu, in the present day, it also brings forth its commendable portfolio of whiskies that are lauded by spirit aficionados. Inspired by Scotch whisky, our founder [Shinjiro Torii] started creating whisky in Japan to meet the Japanese palate, and went on to selling the whiskies to the entire world, which is ever evolving. Today, Japanese whisky is witnessing global popularity by achieving various international acclaims and a variety of esteemed awards, but behind these accolades is the balanced connection with, and influence of, the Japanese tradition and whisky-making culture, which is both greatly familiar yet interestingly distinct.

Q. What are the guiding principles for creating Suntory whisky?
At Suntory, quality comes first. Quality and craftsmanship are the core principles that we uphold while creating the perfect blend of Suntory whisky. We have been in relentless pursuit of perfection, and this is very much evident in the blends we create. We do not just strive for excellence as the end result—from the process of sourcing and procuring the best quality ingredients, to the skills and creativity of our craftsmen, to designing products make it remarkable. The whiskies we create are premium in standard, and delight and satisfy consumers the world over. We work hard to maintain and carry our heritage of artisanship and ingenuity, but at the same time, look to innovate to enchant whisky drinkers.

And if it can improve the quality, we are always happy to go back to more traditional ways even if it is inefficient. We also believe in the culture of monozukuri, which is the art of crafting blends from the highest quality of ingredients, elements and a mindset to deliver perfection from seed to sip.

Q. How has the evolution of drinking preferences over the years influenced Suntory’s single malts and blends?
The aim at Suntory has always been to acquire ingredients and create a blend that is an intersection of traditional craftsmanship and Western convention. There has been a significant shift in the likeability of Japanese whiskies, with increasing urbanisation and the understanding of quality over quantity.

The launch of Suntory’s Whisky Toki is also an addition to this evolution as it provides a versatility to its audience by presenting a perfectly balanced flavour that lingers on the palate. It has been crafted in a way that every addition to it will further enhance the flavour. With the growing premiumisation of the market, and appreciation for crafted spirits, we felt it was the right time to launch The House of Suntory portfolio in 2019, with renowned brands—Yamazaki and Hibiki—that have received recognition from consumers globally and are also popular in India. The harmonious flavours that the two spirits offer, inter-weaving culture and tradition while having its own form of self-expression, is what we believe drew consumers to it.

Q.  What is the best way to drink Toki, the latest Suntory whisky to be available in India? What are the kinds of foods it can be paired with?
Suntory Whisky Toki brings the grain component of the blend from the Chita distillery, where the heavy-type grain whisky is distilled using two column stills and is vanilla-rich with a sweet undertone in its unblended state. The malt component of the whisky is sourced from the Hakushu distillery, which produces light, fruity malt. To best experience this complex-yet-exquisite blend that has a silky taste and distinctive character, I would recommend drinking it as a Perfect Serve, or as a Toki Highball.

The Perfect Serve is served by filling the glass to the brim with ice and adding one measure of whisky. The contents can then be stirred to cool the whisky and the glass, and then topped off with chilled sparkling water along the side of the glass to avoid losing gas, with a twist of citrus.

Since Toki has a very refreshing taste, it goes well with anything, especially with Japanese food such as sushi and tempura. Among Indian foods, it matches with tandoori dishes, especially chicken, prawns and paneer tikka.