Ewan Gunn, Diageo Global Whisky Master, talks to Forbes India about Scotland's famed whisky-producing regions, their natural differences, and how they reflect in the nuances of its blends 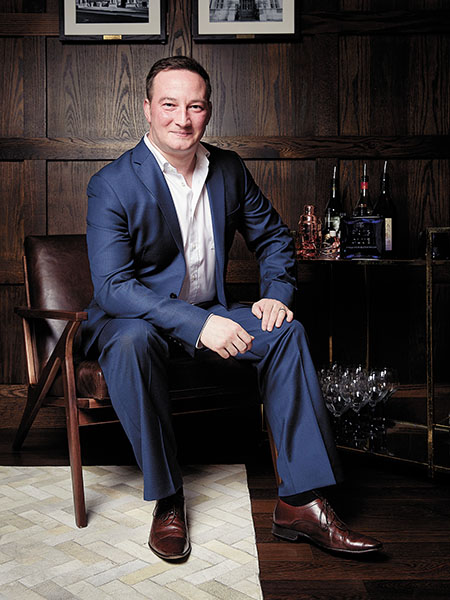 British alcohol company Diageo’s iconic whisky brand Johnnie Walker is preparing to launch its Black Label origin series in India. The series includes four blended whiskies, each honouring the four different whisky regions of Scotland, and includes 12-year-old blended scotch whiskies and single malts from some of the world’s most famous distilleries. Ewan Gunn, Diageo Global Whisky Master, talks to Forbes India about Scotland’s famed whisky-producing regions, their natural differences, and how these differences reflect in the nuances of its blends.

Q. What are the natural elements of Scotland that add to the flavour of whisky?
Scotland is naturally suited to making the world’s favourite whisky. Our temperate climate and considerable annual rainfall ensure perfect conditions for distilling, and sufficient quantities of pure water with which to make whisky. The climate and landscape also allow us to grow barley, which is one of the raw materials used in Scotch whisky-making. Finally, the peat (which we dig from the ground in Scotland and burn under the barley to impart the smokiness to some of our whiskies) is a key flavour-creating element. We should never forget the people of Scotland either: Generations of skilled craftsmen and women have helped grow Scotch whisky into the most admired and loved whisky in the world.

Q. Which are the whisky-producing regions in Scotland, and what are the differences in the natural elements of these regions?
There are four major whisky producing regions in Scotland, each with subtle geographical differences. The Lowland Region is known for lush farmland and a slightly warmer climate, whereas the Highland Region encompasses everything from towering mountain ranges to coastal fishing villages and islands. The Speyside Region within the Highlands is renowned for rolling hills and valleys, rivers, and streams. Lastly, the small island of Islay is a well-known and respected region in its own right, with peat bogs and stunning sandy beaches.

Q. How do these regional differences reflect in the flavour of the whiskies?
Traditionally the weather, farmland, availability of fuel such as peat, and even the local demand for different flavour profiles would all have shaped the style of whisky made in each region. The Lowlands traditionally made lighter, creamier and more delicate whiskies—partly due to the lack of peat in the area, but also because this appealed to the tastes of the local population, and that of our neighbours across the border to the south. The whiskies in Speyside are mostly known for a light fruity style, whereas the Highland Region covers a larger geographical area and thus creates a range of flavour styles, but often a rich, darker, fruity style is to be found. Lastly, Islay is known the world over for its spice, smoke, and maritime notes.

Q. What are the considerations you have while producing each of the blends?
The key consideration is that the flavour profile should be a brilliant representation of the flavours traditionally and typically found in each individual Scotch whisky region of Scotland. It is also hugely important that once brought together, the flavour is well balanced with the component whiskies singing in perfect harmony.

Q.  How is the Origin series different from Johnnie Walker’s other labels?
In our other whiskies, including Black Label or Blue Label, we use whiskies from all four corners of Scotland, incorporating all four regions to bring together the very best of Scotland in a glass. With the Origin Series you have the opportunity to savour each individual region and its unique flavour profile.

Q. Give some examples of how blends from the new series can be paired with different ingredients to make cocktails.
The whiskies can be used to create some wonderful cocktails, each one focusing on the distinct flavour profiles of that region:
Speyside: Make a Lowball, by adding some elderflower cordial and a little soda, which helps to highlight the light and fresh fruit flavours of the whisky.

Lowlands: Make a Heather Honey Old Fashioned, which is a twist on the classic Old Fashioned, using heather honey to make a silky-smooth serve with lovely caramel sweetness.

Q. How has the overall flavour of blended whiskies been maintained over the decades?
It is huge testament to the generations of whisky makers who work for us, and have worked for us in the past, that they have been able to maintain a consistent flavour profile for our whiskies for decades, and in some cases for centuries. In Scotland we have the largest spirits archive in the world, and our whisky makers have access to tasting notes, blending recipes and production information spanning hundreds of years, meaning that our whiskies can remain true to the style that made them famous.

Q. Is climate change having an effect on the production of whisky in Scotland?
The effects of climate change haven’t directly impacted Scotch whisky production yet. We are lucky in Scotland to have a high-quality natural environment with plentiful pure water and a great environment for growing crops like barley and wheat. However, we do not take that for granted. We have been working hard for well over a decade now to reduce our environmental footprint in Scotland by innovating to increase water efficiency and to reduce our carbon footprint. For example, we have invested in our own on-site renewable energy plants at our distilleries. We are committed as a company to driving environmental sustainability from grain to glass.

Tweets by @forbesindia
An uncertain rural boom
Most of our loan beneficiaries are migrant workers, rural youngsters: Charlie Lee