Despite technological advancements, close to half the country's children don't have access to knowledge and learning, even when they go to schools 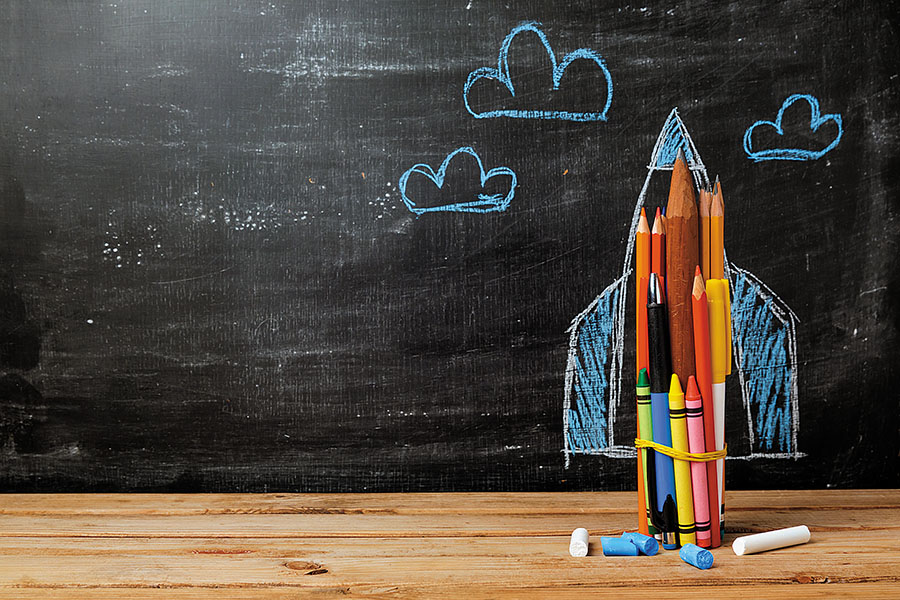 The issue of access to education has once again become a matter of priority ever since schools started shutting down in mid-March. Until then it was said that more than 97 percent children all over rural India have access to school, although about 50 percent in class 5 cannot read a class 2 passage, according to the Annual Status of Education Report (ASER). We had successfully created access to classrooms and to input provision of educational processes called schooling, but have not done too well in the area of enabling children to access knowledge and skills. A new education policy that lays down a pathway to a less rigid education system focusing on outcomes has now been announced. It probably reflects the general desire for greater freedom to access knowledge. But before we get there, the current situation deserves a look.

By the end of March, schools in many countries that were experiencing the pandemic had started reopening their schools with caution, while Indian schools had just begun to shut down. As I write this, the Covid-19 situation seems to be coming under control in Delhi and Mumbai, but in other parts of the country the numbers are growing day by day. Yet, businesses are opening slowly and are adjusting to a ‘new normal’.

Schools were shut down in one shot, but reopening them is not going to be as easy. It will be difficult for systems, private or public, to convince parents that schools are going to be safe places to be in. Everyone is going to wait for a vaccine. It is anybody’s guess at this time as to how long things will take to settle down, and for us to figure out a ‘new normal’ for schools. How different it will be from the old normal is a good question to ask.

Quick adoption of digital technology at a phenomenal speed has played a major role in adjusting to the ‘work from home’ and ‘stay at home’ situation. Of course, the benefits of this new technology adoption are going to those who can work from home, have the digital devices that are needed, can afford to use these devices, and have the skills to use them. Many have learnt new skills quickly, but all the other factors do limit a family’s or individual’s access to services and facilities in the Covid-19 environment. That includes access to education. Or, shall we say, schooling?

The education sector, like all others, has had to deal with issues of access to technology in Covid-19 times. Only, the issues are a bit more complex given daily human interactions. As schools began to shut down in mid-March, those that already had an existing component of digital home-learning found it relatively easy to switch to online learning. Their students had good access to technology and enough space at home.

At the same time, the private and government schools that cater to poorer children were trying to figure out what they could do with technology. Although ‘online education’ was much-talked-about, the realisation that it could not be strictly online but more like ‘tech-assisted remote learning’ was clear from day one, given the problems of accessibility of devices and connectivity.

Available data indicate that about 10 percent of Indian homes have access to computers; they also have smartphones. Another 40 percent only have smartphones with access to the internet. Add to this about 40 percent who neither have computers nor smartphones, but use simple cellphones. The remaining 10 percent have no phone connection at all. Then there is the fact that in many of the poorer households, women and girls do not have access to phones, and when the men go out to work, children cannot use phones at all. Clearly, more than 50 percent of the population in India is not in a position to access education through internet-based activities at this time.

Television coverage in India is also limited to about two-third of households, more urban than rural. Radio sets were present in every household once upon a time. Now, most people listen to the radio on their cellphones and smartphone apps. In short, smartphones guarantee access to all media. In the absence of a smartphone, media access is limited.

Layered access to devices and the internet means that real online learning, whether useful or not, would be possible only for a small percentage of the population. Many government and private schools started sending lessons to children via WhatsApp. Children are supposed to complete the exercises and return them to their teachers. But it was soon realised that such activities still leave out a large proportion of urban poor and rural populations. Several state governments started beaming television (TV) programmes for classes 1 to 8 with the help of NGOs, and a few are trying out radio programmes as well. 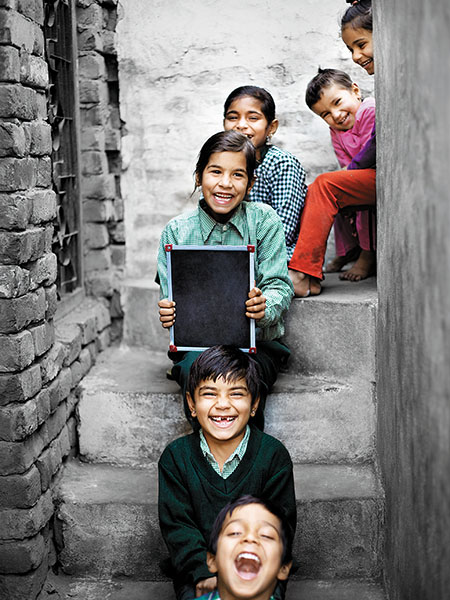 All these efforts are certainly intended to ensure that even in these difficult times there is access to some process of education for all, and children are kept engaged. But, given the existing unevenness of access to technology, how many children or homes do they reach? Probably no more than 40 percent. How effective are the efforts where they reach? After all, motivation to study school texts, which is lacking in the best of times, is even lower under these circumstances.

Will the gap between the privileged and the under-privileged grow during the shutdown period? The cynic in me says it is already so wide, how much more can it grow? The ASER has shown year after year that in class 5, 44 percent children in government schools can read a class 2 text, while 65 percent of private school (rural) children can do the same. Will this 20 percent gap grow bigger? It should be a subject of research. But, more than studying it, there is a need to remedy it.

I recently came across a 20-second video clip of a little boy trying to recite a multiplication table. It sounds like a multiplication table, but numbers are all over the place. Somehow he lands up at “12 X 8 = 108” and looks very uncertain. Finally, he flashes a charming smile and says, “...forgot everything during lockdown!”.

Children like him in our elementary schools will suffer a learning loss due to school shutdowns. The issue of ‘learning loss’ during summer vacations is well-known in the US. My organisation, Pratham, has Indian data that indicate how children with poorer reading abilities further lose them during vacation periods. We also have experience and rigorous large-scale evidence to show that such loss can be recovered rather quickly by doing focussed ‘catch-up’ activities in schools or village communities.

The government of India announced the launch of a Foundational Literacy and Numeracy Mission from December 2020. We do not know if schools will be open by then or not, but it is certainly possible to do ‘catch-up’ activities as part of school reopening protocol. If this is not done, the 50 percent-odd children who are not able to read and comprehend, as repeatedly shown by ASER, will suffer further permanent damage. It’s likely to be the same for nearly 60 percent of children who do not have access to or did not participate in ‘tech-assisted remote learning’ activities regularly.

Technology applications have been creating a lot of excitement ever since schools shut down.

The government of India has also announced a number of intended initiatives to build upon the momentum generated in the last three months. The assumption clearly is that the application of technology will improve quality of education. This may not happen immediately, but once technology enters education in a big way, it will accelerate changes.

It is obvious that the devices gap will have to be taken care of. But, hardware and software should not be slaves to the syllabus and textbooks—the central pillars of the education system—as is the case now. The new education policy has made the important announcement of making class 10 and 12 exams low stakes and formative, not dependent upon memorisation of texts. This will help to redefine the relationship between learning and textbooks. Today textbook and “completing the syllabus” dominate all educational processes, and we have equated knowledge with whatever exists in textbooks. What will happen if the link between textbooks and examinations is snapped?

Examinations and certifications have become enemies of the freedom to access knowledge in the name of their friendship with the process of instruction tied to textbooks. The new education policy aspires to allow students to choose whatever subjects they want to, and more or less carve out the kind of degree or diploma they want. Given the state our educational institutions are in, this may sound close to impossible but it is important to at least present such freedom as an aspiration.

Such freedom to choose what you want to learn cannot be realised without easy access to knowledge, and credible assessment and certification mechanisms. The right to assess and certify was once limited only to governments and government-owned bodies. Over the last two decades, autonomous colleges and private universities have grown. The right to examine and certify has spread wider. But, the barriers to enter these institutions are very high and students who do not belong to these institutions will not be assessed and certified by them.

If examinations can be held to decide which 10,000 of the 400,000 applicants are good enough to enter elite engineering institutions, why is it not possible to hold similar periodic examinations around the country to test ‘external’ students in different courses? What if a student in a remote village of, say, Odisha wants to get a class 10 CBSE (Central Board of Secondary Examination) certificate? Why does he need to be enrolled in a CBSE school? In today’s day and age, freeing up the process of learning for those who want to exercise this freedom is important. Given today’s technology, opening examination centres around the country could be as easy as it was to open internet cafes or public call office booths before that.

There is a subtle difference between right to education, which is the right to being formally instructed, and the freedom to acquire knowledge, which may include the former. The world has moved to the latter. Will the system catch up?

The writer is president and co-Founder, Pratham Education Foundation. (All opinions expressed are author’s own.)


Show More
Get the latest stories, videos, and podcasts from Forbes India directly in your inbox every Saturday
Thank you for your comment, we value your opinion and the time you took to write to us!
Comments 3