Professional tabla players in the country have been associated with nightclubs, where they accompany the undulations of belly dancers, looked down on as figures of ill-repute by many Egyptians. That is something the newcomers want to change 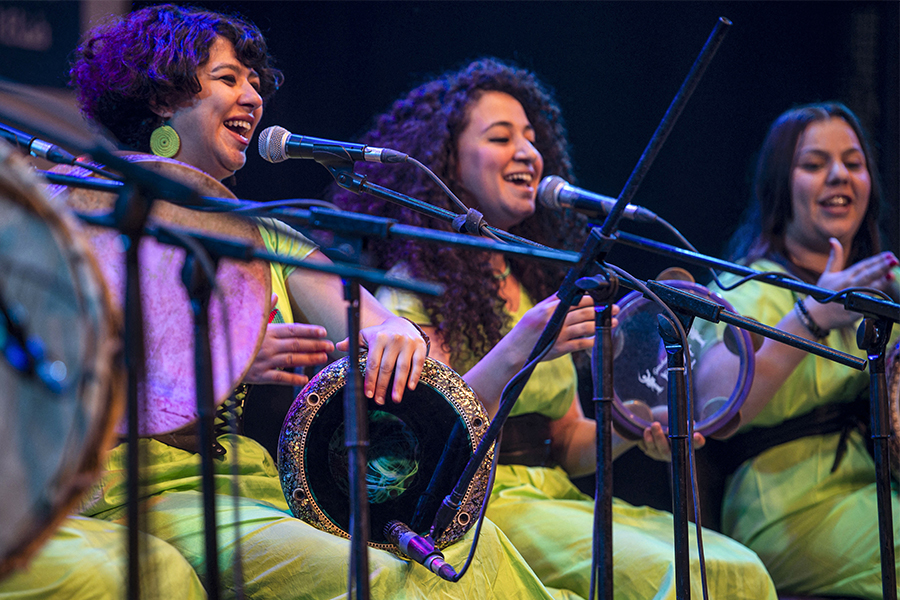 Many Egyptians associate the tabla drum with belly dancers and seedy nightclubs but, despite its image problem, percussionists are giving the ancient instrument a new lease of life.

And it is often women who are now playing the goblet-shaped traditional drum, an early version of which has been found in the ancient temple of the Goddess Hathor in Qena, southern Egypt.

The beat of the tabla is ubiquitous, animating every Egyptian wedding, concert and impromptu dance party.

And yet professional tabla players have been associated with nightclubs, where they accompany the undulations of belly dancers, looked down on as figures of ill-repute by many Egyptians.

"The public's image of the tabla is very negative," said music expert Ahmed al-Maghraby. "People associate it with a lack of morals."

That is something the newcomers want to change.

"There's a new trend now: solo tabla concerts," said musician Mostafa Bakkar, who struggled with his own family's disapproval of his decision to become a tabla player and teacher.

"People find the environment shameful," he told AFP. "They make fun of me and ask, 'So where's the dancer?'"

The quip has its roots in Egyptian popular culture.

The 1984 hit movie "Al Raqessa wal Tabal" (The Dancer and the Tabla Player) told the story of a percussionist whose career grinds to a halt after leaving his belly dancer partner to strike out on his own.

Bakkar, 30, who ties his dreadlocks back with a white bandana, said he also organises improvised drum-playing circles for amateurs.

"I pass out tablas to people around me and we play music in unison," he told AFP.

"It's a kind of group therapy," chimed in neuropsychologist Christine Yaacoub, a regular at Bakkar's drumming sessions.

"I saw how happy tabla can make people, so now I use it as music therapy with my patients," she said.

By practising percussion together, "we heighten our attention span", she explained, because the tabla allows people "to express themselves without speaking".

Most professional tabla players have been men, but now more and more Egyptian women are taking up the ancient instrument, either professionally or as a hobby.

In 2016, tabla players Rania Omar and Donia Sami, one of whom is veiled, went viral on social media with a video that attracted a fair share of online hecklers but also an outpouring of support.

Encouraged, the duo went on to become the first all-woman tabla band in Egypt.

In 2019, 33-year-old Soha Mohammed joined them to create "Tablet al-Sitt" (The Woman's Tabla), "to give all women a chance to sing freely and play the tabla".

Mohammed has since been travelling with eight other percussionists across Egypt, treating audiences to new takes on traditional classics.

At a recent Cairo show under a bridge on the Nile's banks, 500 people gathered at the "Sawy Culture Wheel", singing and clapping along as Tablet al-Sitt played folk favourites.

For band member Rougina Nader, who at age 21 has spent 12 years playing the instrument, it was a long, difficult road to becoming a full-time percussionist.

"We upset men, because we're competition, and audiences love us," she told AFP. "There are obstacles, but that won't stop us from continuing to break the rules."

Tweets by @forbesindia
Agoraverse to introduce the first Web 3.0 shopping center
Cryptosimplified explainer on how your crypto earnings will be taxed