Other big winners on the night were fellow HBO stablemate "The White Lotus," which won a total of 10 Emmys including best limited series, and Apple TV+ comedy favorite "Ted Lasso," again a winner for best comedy and best actor Jason Sudeikis 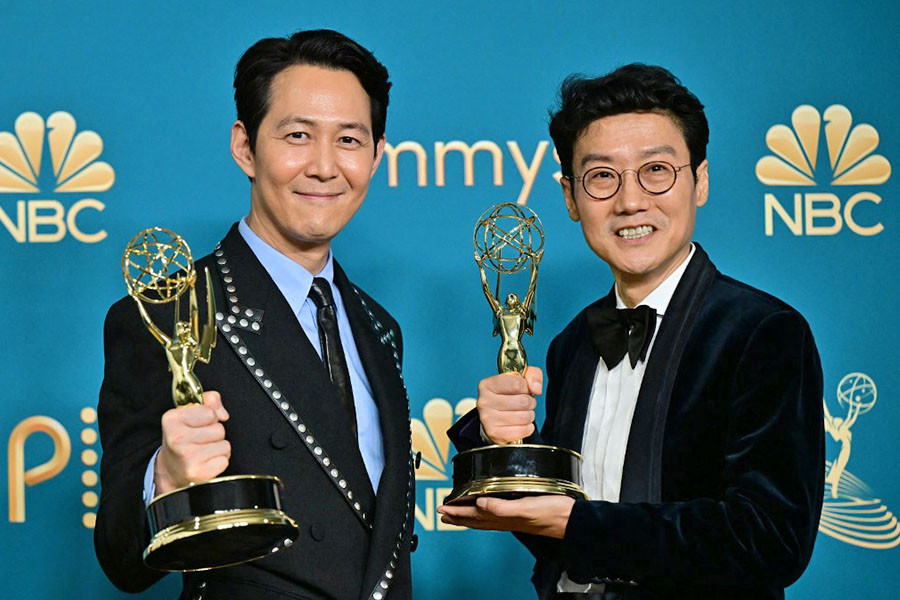 Los Angeles, United States: Dysfunctional family saga "Succession" on Monday took top honors for best drama at the Emmys, television's biggest night of the year, as "Squid Game" made history when Lee Jung-jae was named best actor, a first for a non-English-language performer.
The South Korean social satire about misfits and criminals competing for cash in twisted versions of schoolyard games had also been in the running for the top prize, but the Netflix hit was bested by HBO's latest awards darling.
Accepting the best drama award, "Succession" creator Jesse Armstrong noted it had been a big week for successions—a reference to the death of Queen Elizabeth II and the ascension to the British throne of her son, King Charles III.
"Evidently (there's) a little bit more voting involved in our winning than Prince Charles," he quipped.

"Succession," a Shakespearean drama about a family betraying each other for control of a media empire, led the nominations ahead of Monday's gala with 25, winning four awards overall.
Other big winners on the night were fellow HBO stablemate "The White Lotus," which won a total of 10 Emmys including best limited series, and Apple TV+ comedy favorite "Ted Lasso," again a winner for best comedy and best actor Jason Sudeikis.
"Lotus," a stylish satire on wealth and hypocrisy set in a luxury Hawaiian resort, scooped up two acting prizes as well as directing and writing honors, plus other technical awards.
The limited series award caps contenders at a single season, although "The White Lotus" is slightly bending the rules, having been recommissioned for a second go-around.
It beat out competition in the limited series category from shows recounting four real-life scandals, including "Dopesick," a hard-hitting look at the US opioid crisis, and "The Dropout," which recalls the Theranos fraud.
Michael Keaton and Amanda Seyfried won acting awards for their respective turns on "Dopesick" and "The Dropout."
But Netflix's "Squid Game" made a statement with its six Emmys—beyond Lee, the series won for best directing, best guest drama actress Lee Yoo-mi and three other technical categories.
The wins cement its place in the so-called Korean Wave of popular entertainment, with superstar boy band BTS sweeping the charts and "Parasite" winning the top Oscar in recent years.

The high glamour gala was a return to business as usual in Hollywood as the long awards season started with a bang for the first time in the stricter Covid-19 era.
Host Kenan Thompson opened the proceedings with a dance number set to a medley of hit TV show themes, including "Friends" and "Game of Thrones," before bringing on talk show legend Oprah Winfrey, who lauded "the most successful broadcast medium in the world: television."
There were few surprises throughout the night, with trophies spread around the usual suspects.
Zendaya repeated her feat as best actress in a drama for her turn in "Euphoria," two years after she became the youngest ever winner in the category for the first season of HBO's hard-hitting look at teenage life.
Hitmaker Lizzo, who made a serious fashion statement in a billowing red tulle dress, said her victory for "Watch Out For The Big Grrrls" in the competition program category represented a win for diversity.
"When I was a little girl, all I wanted to see was me in the media," she said, the emotion clear on her face.
"Someone fat like me. Black like me. Beautiful like me.
"If I could go back and tell a little Lizzo something, I'd be like, 'You're gonna see that person, but bitch, it's going to have to be you.'"
Quinta Brunson took home her first Emmy for writing for ABC sitcom hit "Abbott Elementary" and co-star Sheryl Lee Ralph won for best supporting actress, celebrating with a verse of Dianne Reeves' "Endangered Species."
The show was a rare winner for traditional networks, along with perennial Emmys juggernaut "Saturday Night Live."
Geena Davis' Institute on Gender in Media won the special Governors Award, and the veteran actress took up Lizzo's theme.
"Television can often directly impact how people see themselves and judge their value in the world," she said.
"We've made a great deal of progress, but still there's more work to do."
Monday's ceremony marked a return to normality, after the Covid-19 crisis forced producers to get creative with remote and socially distanced editions in 2020 and 2021.
The show at a downtown Los Angeles theater was also the first major Hollywood awards ceremony since this year's extraordinary Oscars, when Will Smith stunned the world by slapping Chris Rock over a joke about his wife.