Japan picks 'war' as kanji character of the year

Japanese public votes in the annual event for the written character they think best represents the past year. According to the Japan Kanji Aptitude Testing Foundation, which organises the vote, the mood was darker this year 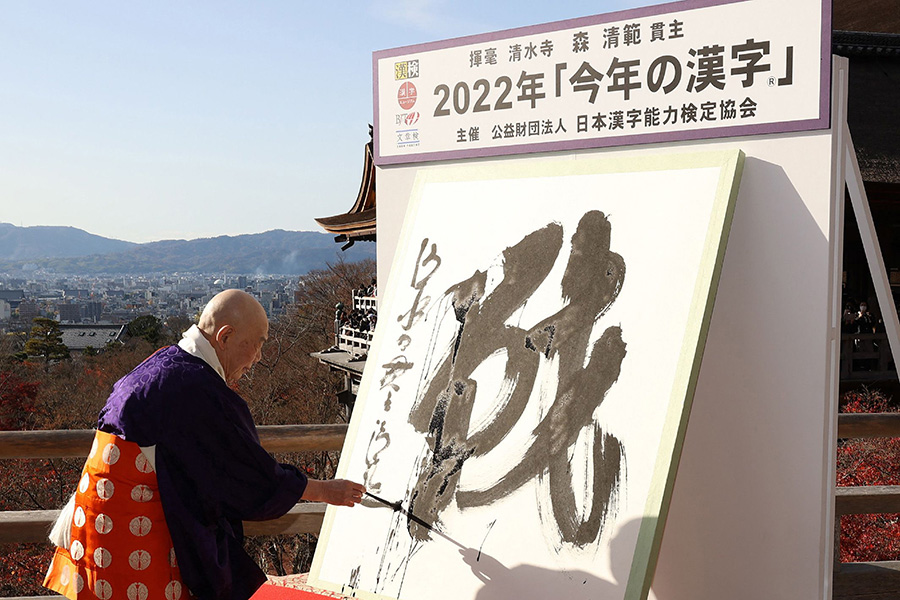 Seihan Mori, master of the ancient Kiyomizu temple, writes the Chinese character, known in Japan as "kanji", for 'war', which was selected as the single best kanji to symbolise the year of 2022 at a temple in Kyoto. Image: STR / Jiji Preaa/ AFP

Japan chose the kanji character for war on Monday as the symbol for 2022 after a year marked by Russia's invasion of Ukraine and the assassination of former leader Shinzo Abe.

The public votes in the annual event for the written character they think best represents the past year. Olympic-themed choices dominated 2021.

The mood was darker this year, however, according to the Japan Kanji Aptitude Testing Foundation, which organises the vote.

"The invasion of Ukraine by Russia, the shooting of former Prime Minister Abe, and the rapid yen depreciation and inflation faced in daily life have caused anxiety for many people," the group said in a news release.

Japanese TV stations broadcast the announcement live, with Seihan Mori, master of the ancient Kiyomizu temple in Kyoto, writing the character on a large white panel with an ink-soaked calligraphy brush.

"I was surprised, frustrated, angry and sad by the war in Ukraine. I am also angry at myself for not being able to do anything about it," said one voter who picked the character.

Abe was shot in July by a man who reportedly resented the Unification Church over massive donations his mother made to the sect.

War—also picked to represent sporting battles in baseball and at the World Cup—was followed in the rankings by a character meaning both cheap and safe, with the weak yen and inflation adding to feelings of insecurity.

The character for fun and easy was ranked third, with one voter citing the opening of the Studio Ghibli theme park.

Japan chose "gold" as kanji of the year last year in honour of the Tokyo Olympics, which took place after a Covid-19 virus postponement.

The 2020 winner was "mitsu", meaning dense, crowded and close: three situations people in Japan were urged to avoid to prevent Covid-19 infection.