Aamir Khan is banking on a remake of Hollywood feelgood hit "Forrest Gump" to revive the fortunes of Hindi-language Bollywood, after a string of weak box-office showings 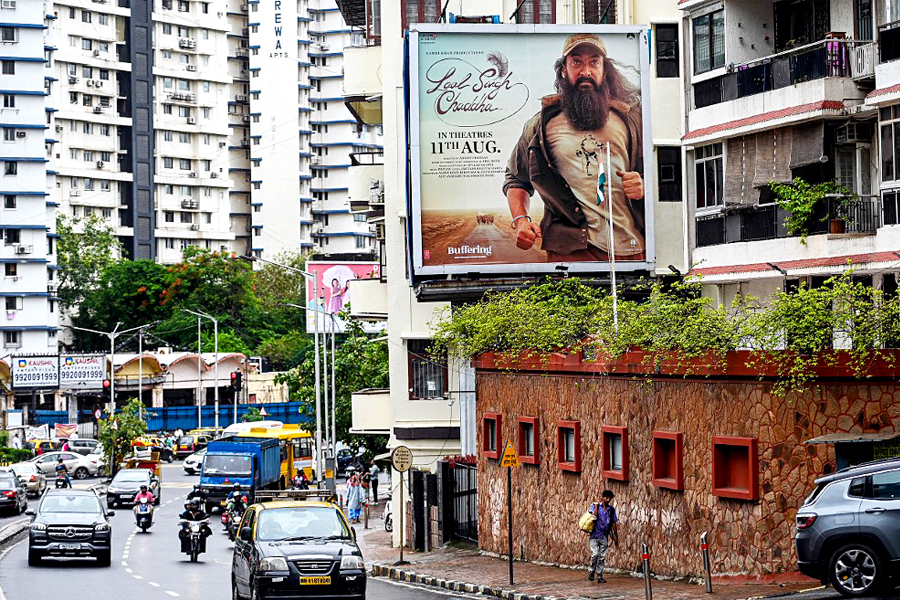 Vehicles drive past a poster of the upcoming Bollywood film 'Laal Singh Chaddha' put up near a residential building in Mumbai on August 8, 2022. Image: AFP

One of India's biggest stars is banking on a remake of Hollywood feelgood hit "Forrest Gump" to revive the fortunes of Hindi-language Bollywood, after a string of weak box-office showings.

Disappointing takings for other Bollywood A-listers have cast a pall over an industry still recovering from Covid-19 lockdown losses when many in movie-mad India turned to streaming giants like Netflix and Disney+ Hotstar.

The adaptation keeps several iconic scenes from the original—which netted six Oscars, including for Best Picture—such as a floating white feather, ping-pong playing and lots of running.

But there are several changes, with Gump's "box of chocolates" line becoming "Life is just like a golgappa. Your tummy might feel full, but your heart always craves more."

Golgappa is a popular Indian snack, while the second half of the saying—"you never know what you're gonna get" in the original—draws from a common Hindi phrase.

The film promises to take people through India's history in the same way Gump stumbled through and influenced major US events like the Vietnam War.

This could irk Indian right-wing critics who have already called for a boycott of the film because of comments made by Khan in 2015 that were deemed to be unpatriotic.

Khan, the star of megahit "Dangal" (2016), and screenwriter Atul Kulkarni were coy in sharing what Indian historical settings would be featured.

Kulkarni would only say that his script was a "beautiful story about a beautiful country called India through a beautiful person called Laal Singh".

Khan, 57, admitted that he initially put off reading Kulkarni's script, uncertain it would be possible to adapt such a "cult classic".

"It's like saying we are remaking 'Mughal-e-Azam' and 'Mother India'. It's not a wise thing to do," he said, referring to two Indian classics.

"But when I heard the script, I understood he's done it. It was a moving experience for me. I really loved it. The moment I heard it I wanted to do this."

Bollywood star Kareena Kapoor, 41, who plays Singh's lifelong friend Rupa, based on Robin Wright's Jenny Curran, said the plot was "timeless" with a love story at its core.

"I wondered how they would play around with such an iconic film," added Naga Chaitanya, a Telugu-language star from the southern film industry "Tollywood" who plays Bala, an adaptation of Gump's shrimp-fishing Vietnam comrade Bubba.

"But the way they have conceived the film for Indian cinema is unique."

Recent silver-screen hits have not come from Hindi-language Bollywood but are in other Indian languages, such as action flicks "Pushpa", "KGF: Chapter 2" and "RRR".

Action film "Shamshera", released on July 22 and starring Bollywood actor Ranbir Kapoor, has so far only made $5.6 million, dashing hopes it would lure audiences back to Hindi cinema.

A rare Bollywood hit this year has been comedy horror "Bhool Bhulaiyaa 2" released on May 20 and featuring rising star Kartik Aryan, which has brought in $24 million so far.

Tweets by @forbesindia
We hear a lot about new drugs. But what spurs innovation in medical procedures?
Dawn dating: Why many singles are choosing to meet up with potential partners in the AM