While most movie theatres remained shut during the pandemic, the 27-year-old entrepreneur doubled down on his vision: transforming a mundane trip to the movies into a memorable event with bowling, arcade games, laser tag, food and booze 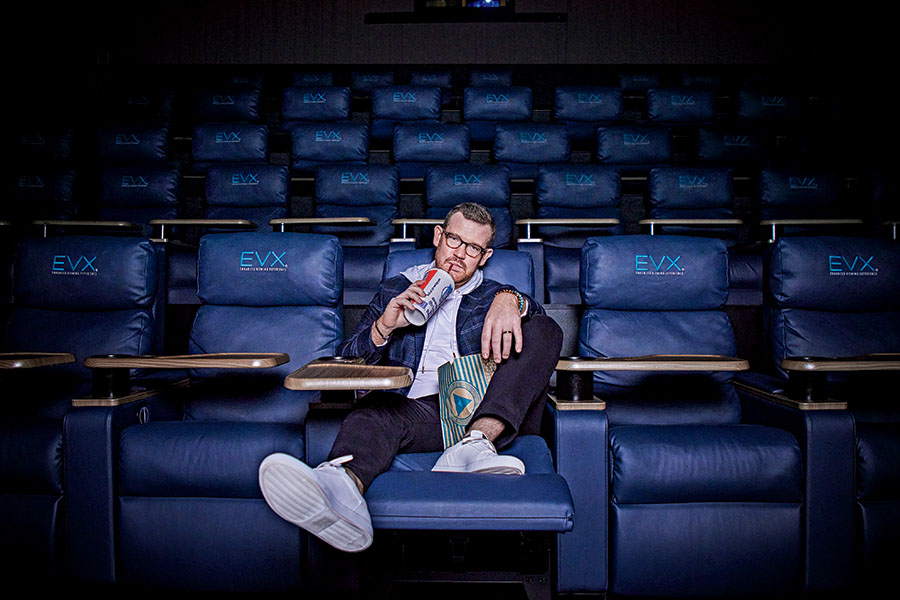 When Texas Governor Greg Abbott allowed the state’s Covid-shuttered movie theatres to reopen at 25 percent capacity on May 1, 2020, most operators took a pass. Never mind the possibility of hosting a superspreader. With no new releases and few patrons, the economics just didn’t make sense. Mitch Roberts disagreed. Only 25 years old, he had built Austin-based Evo Entertainment up to six sites in Texas with 57 screens, 38 bowling alleys, full meal service, 200 arcade games—and a hefty $42 million in debt. When his operations had to close six weeks earlier, he says, “My initial reaction was fear. My immediate second reaction was, let’s get ready for reopening.”

Roberts began showing cult classics like Grease and The Goonies to sparse indoor crowds and rented out idle auditoriums to gamers who wanted to play Fortnite on a 65-foot screen. He improvised new revenue streams: Painting the exterior of two multiplexes white to serve as drive-in screens, turning nine acres of cow pasture into paintball courses and packaging gallon jugs of margaritas and at-home movie night snack kits for pickup and delivery. While many competitors remained shut, he generated buzz with a summer drive-in film festival and a faux pumpkin patch offering horror flicks and Halloween milkshakes, both spiked and alcohol-free. “[Others] took the batten-down-the-hatches approach,” he says. “We took the remind-people-there’s-a-place-for-you-here approach.”

Nevertheless, Evo’s revenues fell 60 percent to just $20 million in 2020. Roberts stayed afloat only due to temporary forbearance from his bank and then $21 million from the federal government from a fund specifically earmarked for shuttered entertainment venues. “An absolute miracle,’’ he says. Between Roberts’ hustling and Texas’s earlier relaxing of Covid restrictions, Evo crawled back far faster than many of its cinema peers. In 2021, sales were just 15 percent lower than in 2019, and by the second quarter, the operation turned profitable again. Roberts owns 60 percent of Evo, his two sisters the rest.

As the pandemic has dragged on, a handful of chains announced permanent closings while others, such as Austin-based Alamo Drafthouse (which pioneered serving booze to moviegoers a quarter-century ago) reorganised in bankruptcy. But Roberts went into expansion mode, scooping up four darkened Texas facilities, including Southlake Town Square in Dallas, which he is now turning into a flagship with seven dine-in theatres, heated recliners, laser tag, bumper cars, minigolf and an indoor ropes course.

To bankroll $30 million in renovations on those four properties and fund further expansion without adding to his $40 million in bank debt, Roberts has enlisted Bryan Sheffield, a 43-year-old centimillionaire. “I thought he was crazy at first,” admits Sheffield, a third-generation oilman. But after months of discussions, he concluded Roberts was onto something—the “crowd business” would survive not only Covid but also streaming and cheap 65-inch TVs. “We live in an experience economy. People crave experiences. They want to get together,’’ declares Roberts, a member of this year’s Forbes 30 Under 30 class. Under their deal, Sheffield’s family office has committed up to $125 million to renovate and buy properties. Evo will get a management fee of around 2.5 percent of revenues on Sheffield-funded properties and, if they clear profitability hurdles, some equity too.

Maybe it’s not surprising Sheffield and Roberts hit it off. Both went into family businesses but branched out on their own. Sheffield started Parsley Energy in 2008 by taking over management of 109 of his grandpa’s old oil wells and securing drilling rights from there. Last year, Parsley was acquired by rival Pioneer Natural Resources (run by Sheffield’s father) for $4.5 billion in stock. Roberts, for his part, is a fourth-generation movie theatre entrepreneur. Most notably, his maternal grandfather, Lee Roy Mitchell, founded Cinemark and at 85 is still chairman with a 9 percent stake (now worth $150 million) in the 524-theatre, 5,897-screen chain.

As a kid, Roberts swept up popcorn and refilled pickle jars at a cinema owned by his parents. That experience led him to hate pickles and crave a piece of the action. At 13, when Grandpa Lee Roy gave him a pricey Big Buck Hunter Pro two-shooter arcade game for Christmas, he moved it (with grandpa’s okay) to his parents’ theatre and split the revenue with them 50/50, using his share to buy additional moneymaking arcade games.

By 17, Roberts was aiming to take entertainment complexes like Dave & Buster’s to the next level. On a fishing trip, he asked grandpa Lee Roy for financial backing. The old man turned him down, but agreed to help hone his 50-page business plan. Connections and grandpa’s advice helped open doors for Roberts. Even so, eight banks and family offices turned him down before Capital One agreed to lend the teen $15 million to buy 10 acres in Kyle, Texas, 22 miles south of Austin, and build his first complex there. 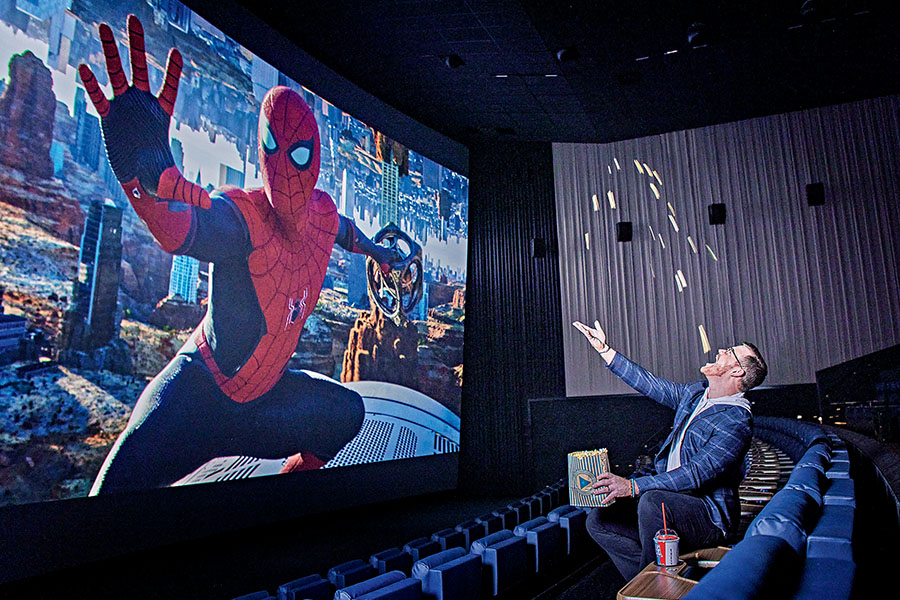 In December, Evo Entertainment sold 62,000 opening weekend tickets to Spider-Man: No Way Home—topping even Avengers in 2019

With financing lined up, in 2014, Roberts dropped out of his freshman year at Texas State to build the 70,000-square-foot facility, including 11 screens, 14 bowling lanes, a video game arcade and a full kitchen producing gastropub fare—burgers, pizza, even teriyaki salmon. He quickly spent “every penny” of the $15 million and will soon upgrade the movie seats to $600 recliners with trays.

It’s all luxury with a purpose.

Just as traditional movie theatres basically break even on the box office but make their money selling popcorn and jumbo sodas, Evo uses its movies as bait to sell patrons higher-margin items. Roberts forks over 55 percent of box office receipts to the studios but keeps nearly all revenue from bowling, arcade games, popcorn, beer and margaritas, with gross profit margins as high as 90 percent. To balance his own inexperience, Roberts stocked Evo’s executive team with cinema and restaurant veterans, following, he says, grandpa’s admonition: “If you’re the smartest person in the room, you’re in the wrong room.” (In 2020, he also scooped up Alamo Drafthouse’s longtime chief operating officer.) 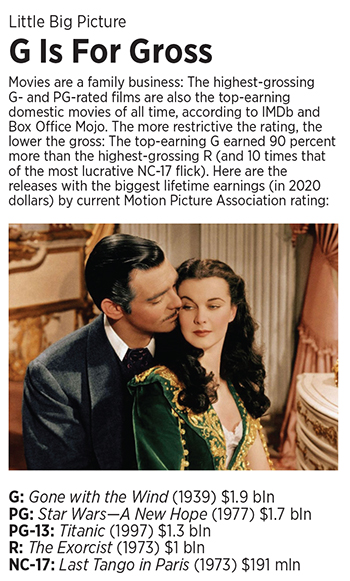 Roberts’ timing was right. Blockbuster hits like Jurassic World, Star Wars—The Last Jedi and Black Panther helped the US box office gross more than $11 billion each year from 2015 through 2019. Roberts expanded and borrowed another $25 million from Capital One to build a 10-screen location in Schertz, 22 miles from San Antonio. It opened in 2019. That year, Avengers: Endgame became the second-highest-grossing movie of all time and gave Evo its best revenue weekend ever. In all, Evo booked $50 million from 2.5 million guests in 2019—an average of $20 per admission. His best locations generated $25-plus a head with operating margins of 20 percent, above the industry average.

Then Covid-19 hit. The domestic box office take collapsed to $2.1 billion in 2020, crawling back to $4.5 billion in 2021. This past December, Roberts saw his big-event approach deliver again when Evo sold 62,000 opening-weekend tickets to Spider-Man: No Way Home—topping even Avengers in 2019. This being Texas, despite the rampaging Omicron variant, there were no vaccine requirements, temperature checks or capacity limits.

On Christmas Eve, the Roberts-Sheffield partnership completed its first big deal, with Sheffield paying an estimated $70 million for the nine-location suburban Showbiz chain, built by Roberts’ maternal uncle beginning in 2015.

“We like ‘boomburbs’. I love to see a new high school being built,’’ Roberts says. The pair is scouting for deals nationwide, initially only in Covid-relaxed Texas, Florida and Colorado.

“No one is buying cinemas and concert venues. But they’re not going away,’’ Sheffield says. “When lockdowns are over, the pent-up demand will be serious.”

Now with 16 locations, 148 screens and 108 bowling lanes, Roberts expects more than $125 million in sales this year. And he’s still tweaking his pandemic-era model. “We’re experimenting with pods,” he says. That’s a loveseat for two, with distance and privacy from fellow moviegoers, be it for Covid protection or other benefits.