Space Perspective revealed illustrations of its swish cabins, which it hopes to start launching from the Kennedy Space Center in Florida from late 2024. More than 600 tickets have so far been sold, at $125,000 each 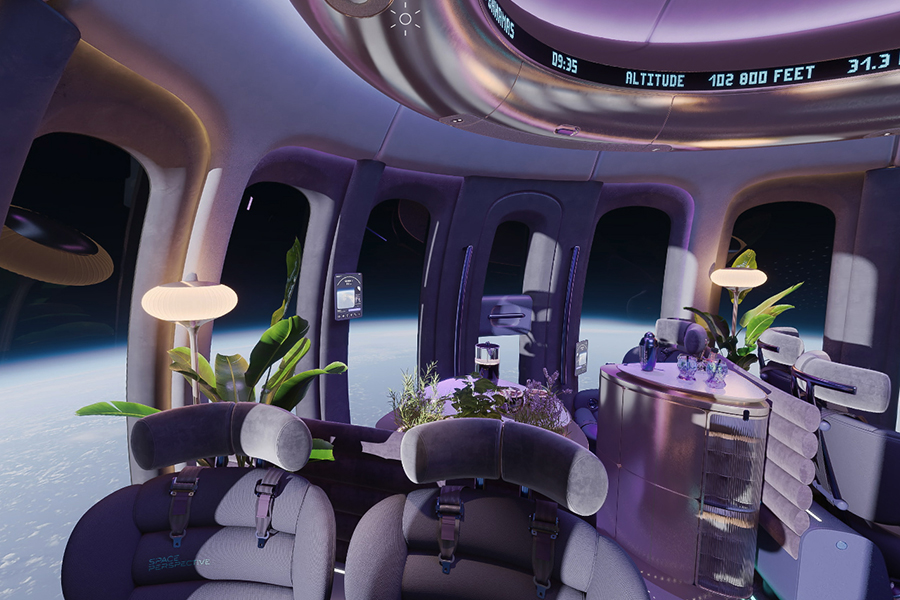 A first look at the Space Lounge Image: Courtesy of Space Perspective

A new entrant in the space tourism market promises customers views of the Earth's curvature from the comfort of a luxury cabin, lifted to the upper atmosphere with a giant balloon.

Space Perspective on Tuesday revealed illustrations of its swish cabins, which it hopes to start launching from the Kennedy Space Center in Florida from late 2024. More than 600 tickets have so far been sold, at $125,000 each.

With five-feet (1.5 meter) high windows, deep seats, dark, purple tones and subdued lighting, the atmosphere contrasts with the white and sanitized capsules of its competitors.

Wifi connectivity and a drinks bar round out the "Space Lounge" inside the company's Neptune capsule.

Whether it really constitutes spaceflight is a matter of debate.

The balloon reaches an altitude of 20 miles (30 kilometers), much lower than rivals Virgin Galactic, which goes just over 50 miles high, or Blue Origin, which breaches the Karman Line, 62 miles above sea level, the internationally-recognized space border.

But 20 miles is still far higher than commercial planes, which ascend around six miles high.

"We are above 99 percent of Earth's atmosphere," co-founder Jayne Poynter told AFP, meaning passengers will really see the inky black of space.

There's no special training required. The balloon climbs at a serene 12 miles per hour (19 kilometers per hour), and the company pitches itself as a greener, zero-emissions alternative to rocket fuels.

They intend to get the hydrogen for the balloon from renewable sources, rather than extracting it from fossil fuels.

The price for the two-hour-up, two-hours-gliding, and two-hour-down voyage, which ends with an ocean splashdown, is significantly less than Virgin Galactic tickets that cost $450,000 for a ride on a spaceplane.

Blue Origin doesn't disclose its prices but they are thought to be far more, while four entrepreneurs who flew to the International Space Station on a SpaceX ship paid a reported $55 million each to the company Axiom Space for the privilege.

"We wanted to find a way that really changed the way people think about spaceflight that makes it much more approachable and accessible," said Poynter.

One thing the passengers won't experience is feelings of weightlessness.

With Virgin's spaceplane and Blue Origin's rocket, passengers can unbuckle and float when the rocket engines are cut but the ship keeps coasting upwards for a few minutes, before gravity pulls it back down.

Passengers on SpaceX spaceships and those on the ISS likewise experience apparent weightlessness because the vessels are orbiting the Earth.

Space Perspective plans 25 flights in its first year, with all seats now booked.