In January 1992, a pair of astronomers found planets outside our solar system. Now, 30 years later, the list of known exoplanets has just topped 5,000, according to NASA 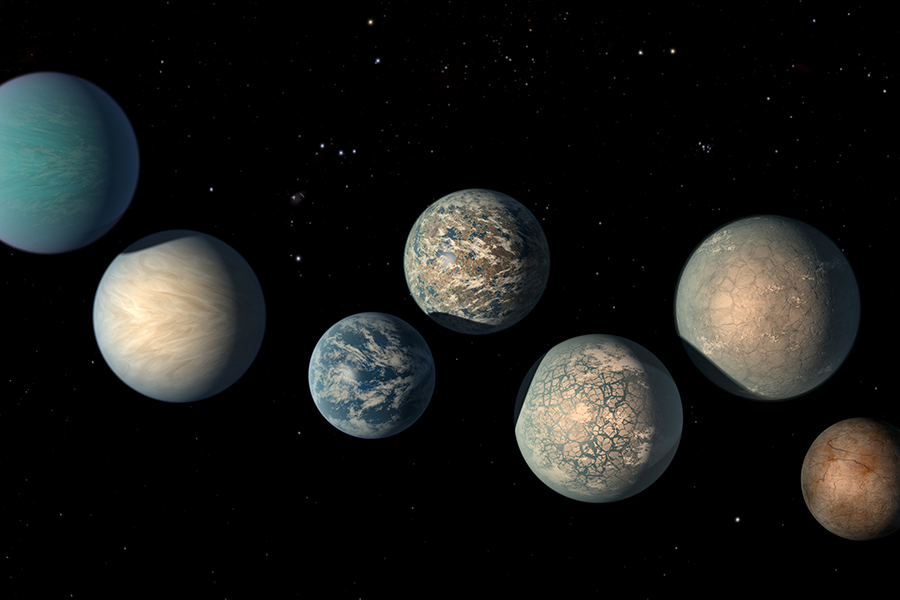 This illustration shows the seven Earth-size planets of TRAPPIST-1, an exoplanet system about 40 light-years away, based on data current as of February 2018. The image shows the planets relative sizes but does not represent their orbits to scale. The art highlights possibilities for how the surfaces of these intriguing worlds might look based on their newly-calculated properties. The seven planets of TRAPPIST-1 are all Earth-sized and terrestrial. TRAPPIST-1 is an ultra-cool dwarf star in the constellation Aquarius, and its planets orbit very close to it. Image: NASA/JPL-Caltech/R. Hurt, T. Pyle (IPAC)

In January 1992, a pair of astronomers reported a discovery that changed the course of scientific history: They found planets outside our solar system.

The detection of the first confirmed exoplanets — the term for worlds that orbit other stars — validated dreamers who for centuries believed that “innumerable celestial bodies, stars, globes, suns and earths may be sensibly perceived therein by us,” in the words of the Renaissance polymath Giordano Bruno. One such detection — the world 51 Pegasi b in 1995 — led to the award of the 2019 Nobel Prize in physics to Michel Mayor and Didier Queloz.

Now, 30 years later, the list of known exoplanets has just topped 5,000, according to NASA. This dazzling abundance and variety of worlds has come into view with the aid of ever-more sophisticated space telescopes. There are “hot Jupiters” that orbit scorchingly close to their stars and beefed-up versions of our planet known as “super-Earths.” Rogue planets, unmoored from their stars, wander interstellar space. And some worlds show signs of habitability, meaning they could host alien life.

To celebrate the milestone, experts and enthusiasts shared their favorite exoplanets or exoplanetary systems among the thousands of worlds to choose from.

Poltergeist and Phobetor were the first confirmed exoplanets ever spotted. Alexander Wolszczan and Dale Frail detected the planets orbiting a neutron star, a type of dead star, using the Arecibo telescope in Puerto Rico.

“Not only did this discovery precede further confirmed exoplanet discoveries by three years, Poltergeist and Phobetor were the first exoplanets with Earth-like masses and the first multiplanet system,” said Frail, an astronomer at the National Radio Astronomy Observatory.

“This discovery suggested that, if you can make planets around a neutron star, they should be common around all kinds of stars,” said Wolszczan, a professor at Pennsylvania State University.

No doubt about it

Though Poltergeist and Phobetor were the first confirmed exoplanets in history, an absolutely humongous gas giant nicknamed Tadmor was spotted in 1988 by scientists based in British Columbia. The existence of Tadmor was disputed for years, even by its own discoverers, but was eventually confirmed in 2002.

Chris Hadfield, a Canadian astronaut, said that “firsts” are always important to him, which is just one of the reasons that Tadmor is his favorite exoplanet.

“Part of the reason I like it is that it was detected by three Canadians,” said Hadfield, referring to Bruce Campbell, Gordon Walker and Stephenson Yang, “and they just couldn’t believe it.”

“To me, since it’s the first one, it’s the one I think ends up being the most historic and at this point, the most interesting,” he added.

With seven rocky planets and a location just 40 light-years from Earth, the TRAPPIST-1 system is a fan favorite.

Lisa Kaltenegger, director of the Carl Sagan Institute at Cornell University, noted that the system had four planets in the habitable zone — the region around a star where liquid water could potentially exist.

“Wouldn’t it be incredible to find more than one habitable world around one star?” Kaltenegger said.

TOI-1233, a sunlike star more than 200 light-years from Earth, contains five known exoplanets. Four of these worlds were spotted in 2020.

“TOI-1233 is an outstanding planetary system with its high number of transiting planets, sunlike host star and its proximity to the solar system,” said Tansu Daylan, a researcher at the Massachusetts Institute of Technology.

Daylan detected the system with Jasmine Wright and Kartik Pinglé, who were both high school students at the time.

“This system is dear to my heart because it represents my first hands-on research experience in astrophysics,” said Wright, who is now studying the subject and computer science at the University of Colorado Boulder. “Since I was 7 years old, it’s been my goal to become an astrophysicist and work for NASA, and discovering this system brought me that chance sooner than expected.”

Pinglé, a senior at Cambridge Rindge and Latin School in Massachusetts, added that there was much still to be discovered at TOI-1233.

“It is a prime candidate for follow-up observation, particularly from the recently launched James Webb Space Telescope,” he said.

The possible exoplanet J1407b is nicknamed “super-Saturn” and “Lord of the Rings” because its ring system appears to stretch as far as Earth is from the sun.

Ann Druyan, who created the original television series “Cosmos: A Personal Voyage” with her husband, Carl Sagan, and is the creative force behind its two recent iterations, said this world made an impression on her.

More than half of the 5,000 known exoplanets were spotted by Kepler, a workhorse NASA space telescope that retired in 2018. Out of them all, William Borucki, Kepler’s principal investigator, has a clear favorite: Kepler-62f, a super-Earth about 1,000 light-years from Earth.

“It is in the habitable zone. It is similar in size to the Earth. It could be a rocky world or a water world,” he said in an email. “It orbits a star similar to but older than our sun.”

He added, “Any life on the planet could be much more advanced because the planet and any life on it would/could be that much older than terrestrial life and therefore be of special interest.”

Kepler-10b was the first rocky planet to be discovered by the Kepler telescope, in 2011. The planet is slightly larger in size than Earth, and about four times as massive. But its temperature exceeds 2,500 degrees Fahrenheit because of its close orbit around its star, making it a nightmarish world.

So close, yet so far

Proxima Centauri, a red dwarf that is part of the three-star Alpha Centauri system, is our star’s closest neighbor, just 4 light-years away. Over the past few years, scientists have spotted three exoplanets, Proxima b, c and d — which are especially captivating to Sharon Xuesong Wang, a scientist at Tsinghua University in Beijing.

“I think within our lifetime, there’s a chance that we could see a mission actually flying somewhere closer to the system to study the planets in more detail,” Wang said. “It is not very likely there is life on any of these planets though, but who knows — the universe likes to surprise us.”

Kelt-11b is a hot Jupiter that was first reported in 2017 with the Kilodegree Extremely Little Telescope. The planet is special to Kate Isaak, project scientist for the European Space Agency’s CHEOPS spacecraft, launched in 2019, because it was the first light curve, a measurement of a star’s brightness that reveals exoplanets, ever studied by the observatory.

“We were able to determine its size with an accuracy five times better than from Earth, setting the uncertainty in its size to around 4,200 kilometers,” Isaak said, adding that it proved the scientific potential of the CHEOPS space telescope.

During his years on “Star Trek: The Next Generation,” Wil Wheaton became familiar with fictional worlds and new forms of life. He picked YZ Ceti b, which is slightly smaller than Earth and orbits a red dwarf located 12 light-years away, making it tantalizingly close for further study.

“It doesn’t make sense that, in a universe as vast as ours, we are the only intelligent (sentient) species,” Wheaton said in an email. “So when I look out into the night sky, I don’t just imagine that someone else is looking back. I know they are.”

He added that proof was unlikely to come in our lifetimes, so “our most urgent challenge as a species right now is to take care of the only planet we can live on so that generations from now, in a future so far away we cannot imagine what it will look like, our descendants can make first contact.”

Puff up your imagination

At just 500 million years old, Kepler-51 is among the youngest star systems on this list. But though it is still a baby in astronomical terms, the system is already home to multiple planets with enigmatic properties, said Peter Gao, a staff scientist at the Carnegie Institution for Science.

Gao said the system’s three planets were nicknamed “super puffs,” with extremely low density that brings to mind Styrofoam or cotton candy and “challenge our understanding of how planets form and how they evolve.”

He added that, “I like them because I like a good mystery, and their existence has shown that the universe is always more imaginative than we are.”

Tweets by @forbesindia
They just got their driver's licenses. Now they are going off-road
How Gold Spot became the most popular 'uncola' of its time in India