The actor-producer on the growing popularity of South cinema, and how he is building a culture with his investments 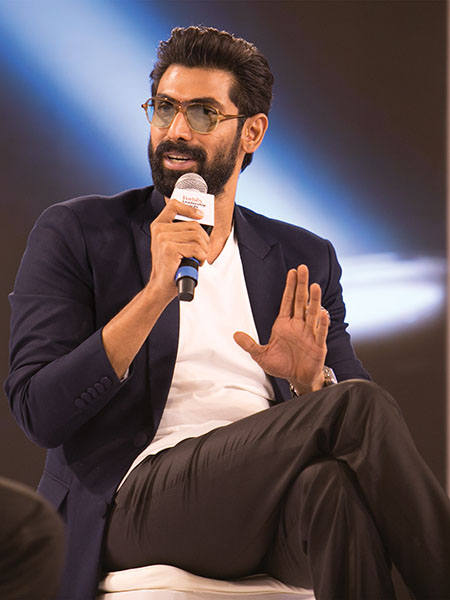 An established star down South and a known face in the Hindi film industry, actor-producer Rana Daggubati is convinced that the geographical boundaries have blurred as far as content is concerned. The box office success of recent films such as Pushpa and RRR is testimony to the popularity of South Indian movies across the country.

“It is a moment that had to happen,” says the 37-year-old during an interaction at the 2022 Forbes India Leadership Awards, held in Mumbai on March 25. “Two things led to it: Some dreams of filmmakers of making bigger and bigger films… so in that direction, they explored bigger markets. Telugu films got to Hindi, Hindi films got to Tamil and so on… that went on creating a pan-Indian film industry. And the advent of OTT changed what cinema you see. The audience is now exposed to a lot more cultural part of the country that they never were.”

The Baahubali star says if a story is made at the right cost and it goes to the intended audience, and it makes money for everyone who has invested in it, it becomes a successful project. “The yardstick, though, will keep changing, but ultimately it is about the right story to tell,” he adds.

Off screen, Daggubati has invested in businesses ranging from a business accelerator programme to a tech startup. He is also the co-owner of the Hyderabad FC that won the Indian Super League in March. “My investing started in trying to make better films,” he says. “India has six or seven large film industries, but they do not speak to the tech [world] in that same city. Look at Mumbai, for instance… the IT world and the film world do not even meet. That is really why I started investing. It began with visual effects, and because we had a lot of content and wanted to syndicate it, blockchain and that world opened up.”

An actor for over a decade, Daggubati says: “Making a film, for sure, is far harder than investing. I’ve had far more success in investing in places than in making movies. In investing, at least there is a quick turnaround in terms of learning. You don’t make the same mistake twice very fast. But in the movies, you make a film and you have to unlearn everything to make an entirely new and different story. So, it’s also very satisfying.” That’s one of the reasons why he connected well with the startup world when he began investing because he realised “we are doing the same thing in a different form”.

Fame and stardom, he says, create access. “Because of the cinema that I have done, there is a likeability that you build. And that likeability will transfer into any entrepreneur/startup that’s building and wanting to be out there. That’s where we add value. We can bring your brand out and showcase it in the best way it should be,” says the entrepreneur, who has also invested in a health and wellness company, and wants to build a culture with his investments.

As actor-producer, Daggubati says he will continue to find avenues to open newer cinema to an audience whose taste is constantly evolving. “As time goes, there will be so many newer ways in engaging in storytelling. I’ll just keep finding newer things to do.”